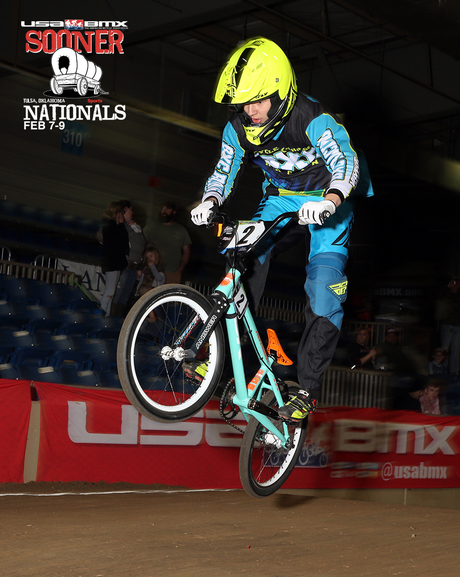 The BMX world returned to Tulsa - only this time around, it was for the Sooner nationals, inside the Ford Truck Arena (right across the parking lot from the Grands Expo center). And much like the Grands, the main event action kept getting more exciting right up until the final main! 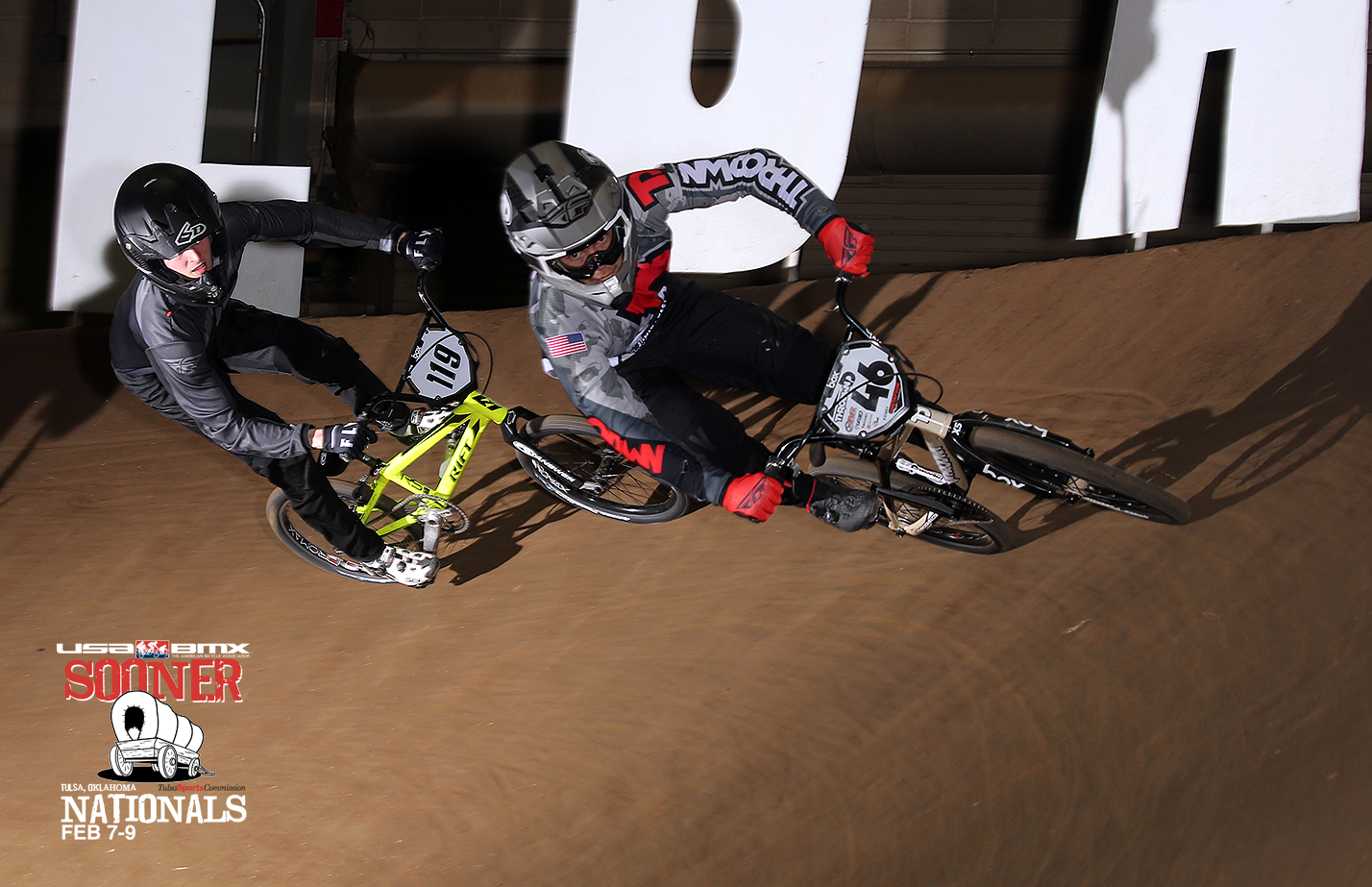 While many of the World's top Elite pros were down unda' waiting for clouds to clear in Bathurst, USA BMX saw a couple of AA-pros show up at Sooners for some early-season, indoor action. Throdwn's Kenny G and Texan Tanner "T-Bone" Sebesta joined a bunch of the Marian University team and A-pros to kick off the weekend. This was the first race back for Sebesta, after healing up from a crash last year. On his time-off, he's been doing a lot of coaching and working with a lot of Texan amateur racers - and he'd just became a dad for the second time, with the arrival of a daughter a week earlier. "I was lucky to get away to come here," he admitted.

In the end, though - even T-Bone couldn't catch the speed and smoothness of Kenny-G, who took his tan and black Throdwn to wins all three days. With 2020 being an Olympic year, a rider like Kenny-G could put himself in serious contention for the USA BMX No.1 Pro title while the others are focused on that big little race in Tokyo this summer. 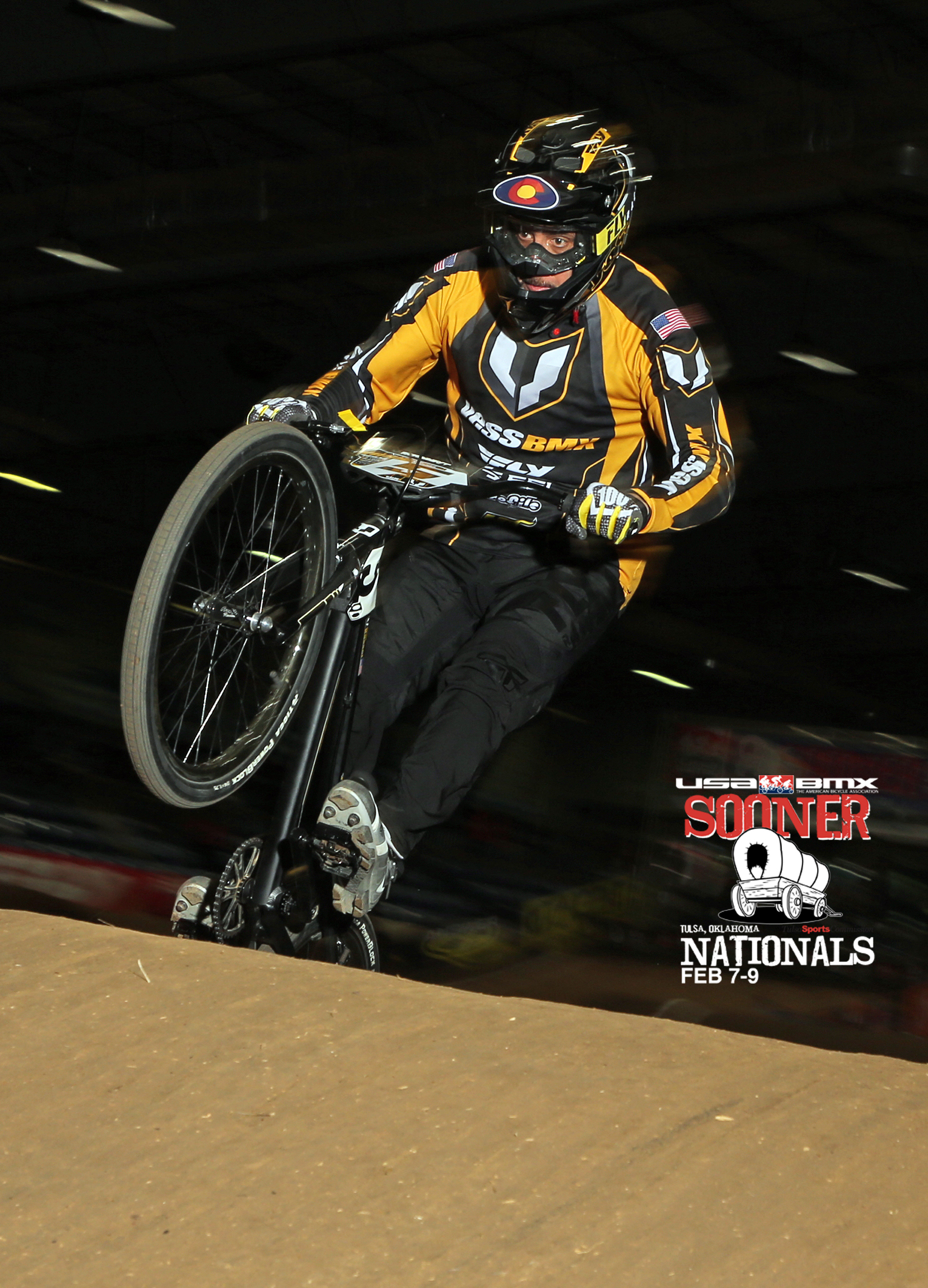 This year's Tulsa track was back to the traditional, tried and true "M"-shape. (Or, if you're on the MJT Designs end of the arena, you might think it's a "W"). Tulsa resident Billy Allen and his crew did another amazing track build, that was both fast, fun and challenging. We overheard a lot of riders in staging saying that the rhythm down the third straight was one of their favorites. ...except for Alfonso Giganti, who in the end wasn't too fond of it, and asks "What rhythm section?"

Atop o' turn two was adorned with the familiar 8-foot tall letters: T-U-L-S-A, officially making it the "Tulsa turn." on Saturday, during the motos, one rider tried to split te middle of the "U" - but failed.
With a plentiful supply of dirt, all three turns were monsterous, and had just as plentiful an amount of moves being made in every turn, in every moto. Carvability and swoopability were high this weekend, for those riders who've graduated from the School of Bubba Harris.

Only three nationals into the season, and we're already seeing some stand-outs for 2020. In Tulsa, the dude out front of 15-16 X-Open wearing the flannel Potter uniform - Sawyer Holly, became the first Open Jacket winner of the year. Think about that - there's only been three nationals, and eight opportunties, and the Alabama "SawDog" already got his required seven Open mains to be awarded the custom turquise coat. 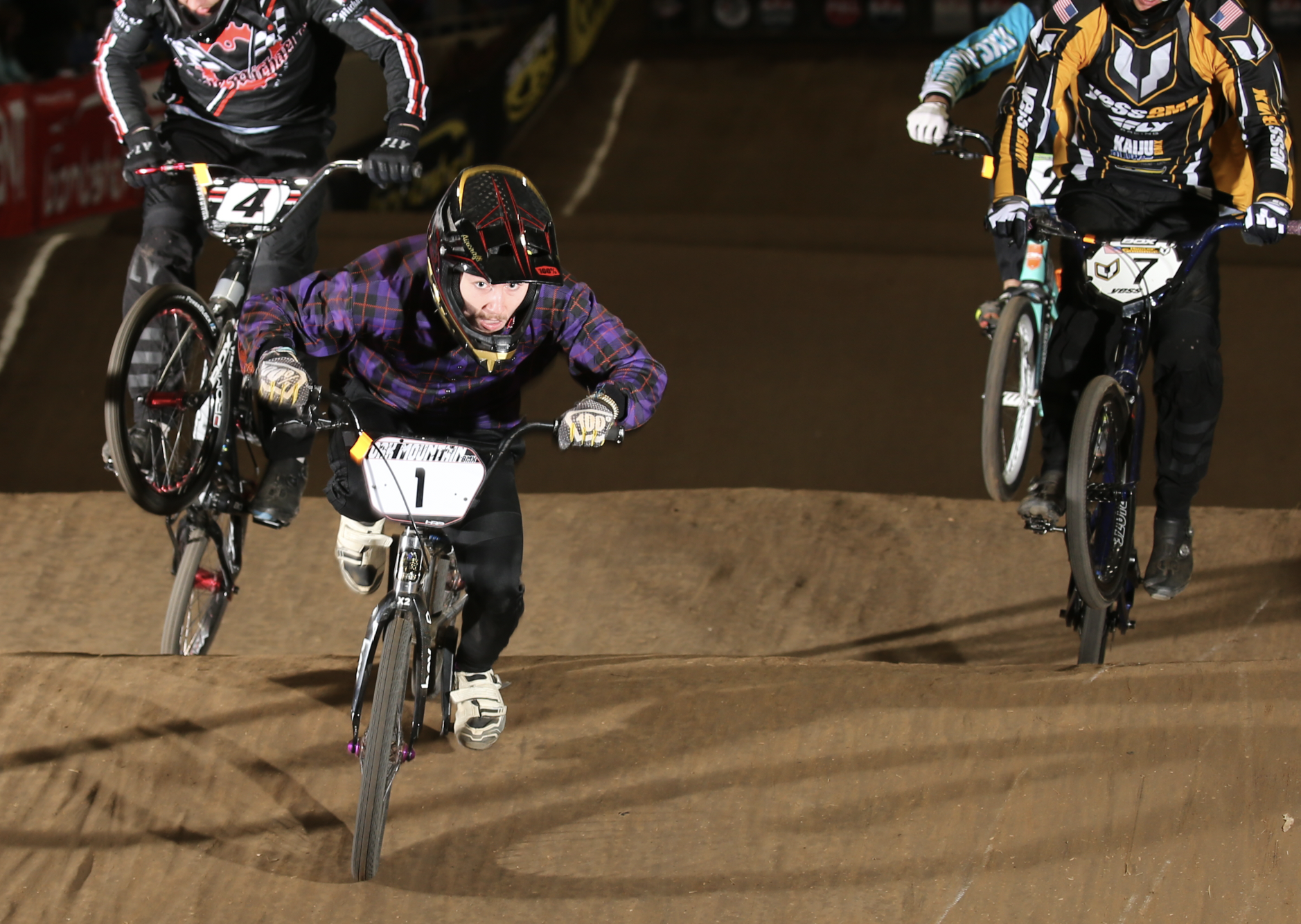 Also note: "SawDog" didn't just "make" those X-Open mains - but he won a bunch of 'em as well! 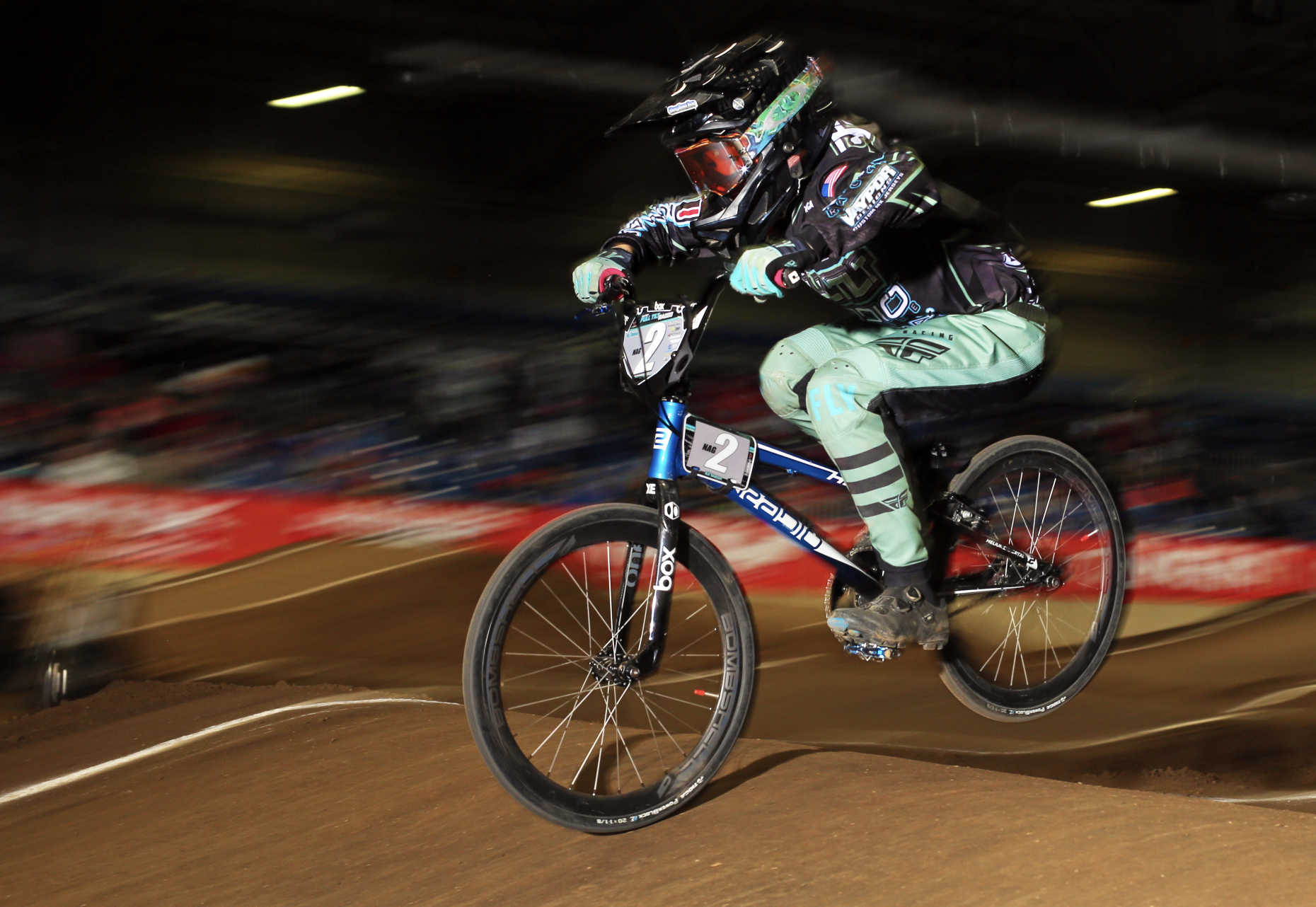 Another ripper who is off to a great start in 2020 is FullTilt'er Eli Staton; who continued his unbeatableness in 9x, and now has an 8-straight win streak in one of the toughest little-dude classes of our sport.
In case you didn't catch that - let me repeat: Eli has EIGHT STRAIGHT WINS in 9x!!

Depending on the rider-count, we'd say its pretty safe to assume that Staton will be sitting proudly at the top of National amateur points. And come November, chalk him up as one of the big contenders for that illustrious silver cup.

On 24" wheels, we witnessed a ton of great racing - so it was hard to pick just one main to highlight. With some high enough rider-count, this classes superstars could be in title-contention by the end of the year, in this very same town. But there will also need to be one standout rider to dominate. As it stands right now, it's a tight, three-way field between Will-I-Am Edmunds (in his new Hyper colors), Tangent'Rift's bobbleheader Chris Felker and rising star Ryder Robinett.

Any three of these jammers could score the win on any given day. While Edmonds is the Holeshot King, Felker is just a little bit more aggressive in the turns and Robinett had things dialed in on the rhythm-filled third straight.

Another kid who has been on fire so far this year is Alpha's new pick-up - Blaise Pereira, from Louisiana. Last year was a break-out season for the Louisiana flyer, and it's looking as if he's really found his groove in 2020. Up against the likes of Ryan Bramer, Chatty Chatwood and Camden Brent - Blaise was constantly found out front, and on occasion had to go grip-to-grip with Blackcrown's Bramer bro. 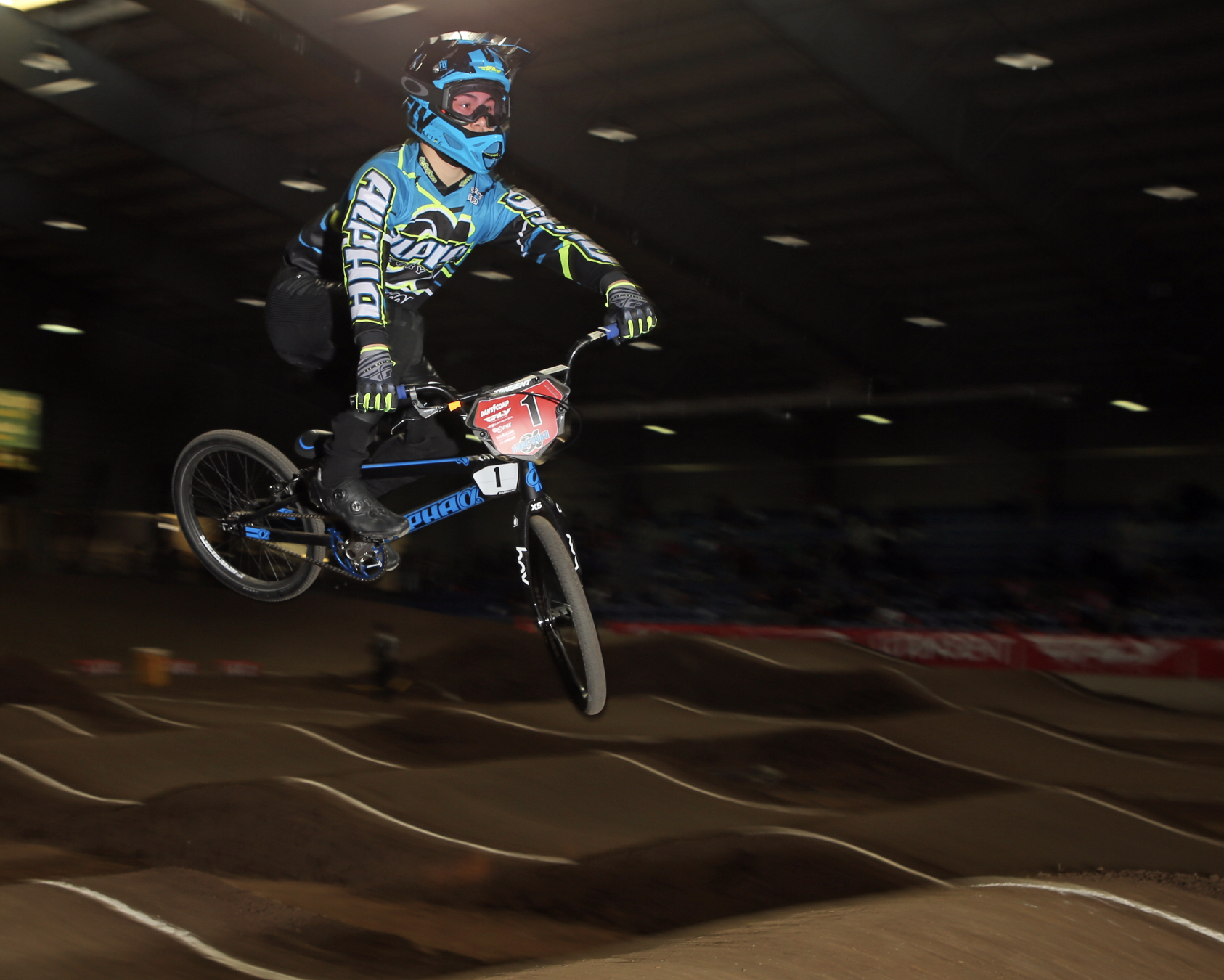 After such an amazing ending to the last time we were in Tulsa (that'd be for the 2019 grands, remember?), everybody by now should know that you never - I repeat NEVER, EVER, want to leave a national until the very last gate drop crosses the finishline. Seriously - i don't care how hungry you may be, or if your kids are crying or grumpy because they didn't win their mixed open, I highly reccomend for everybody to stick around in the stands and wait for the greatest show in our sport - 51 & Over Expert!

These guys in 51+X know how to put on a show; especially since many of them are former Pros. Even though their bones are aging and the joints are creaking with each crank, their skills haven't yet rusted and strangely, in their minds - they are still 18 years old without a worry in the world - except to WIN. 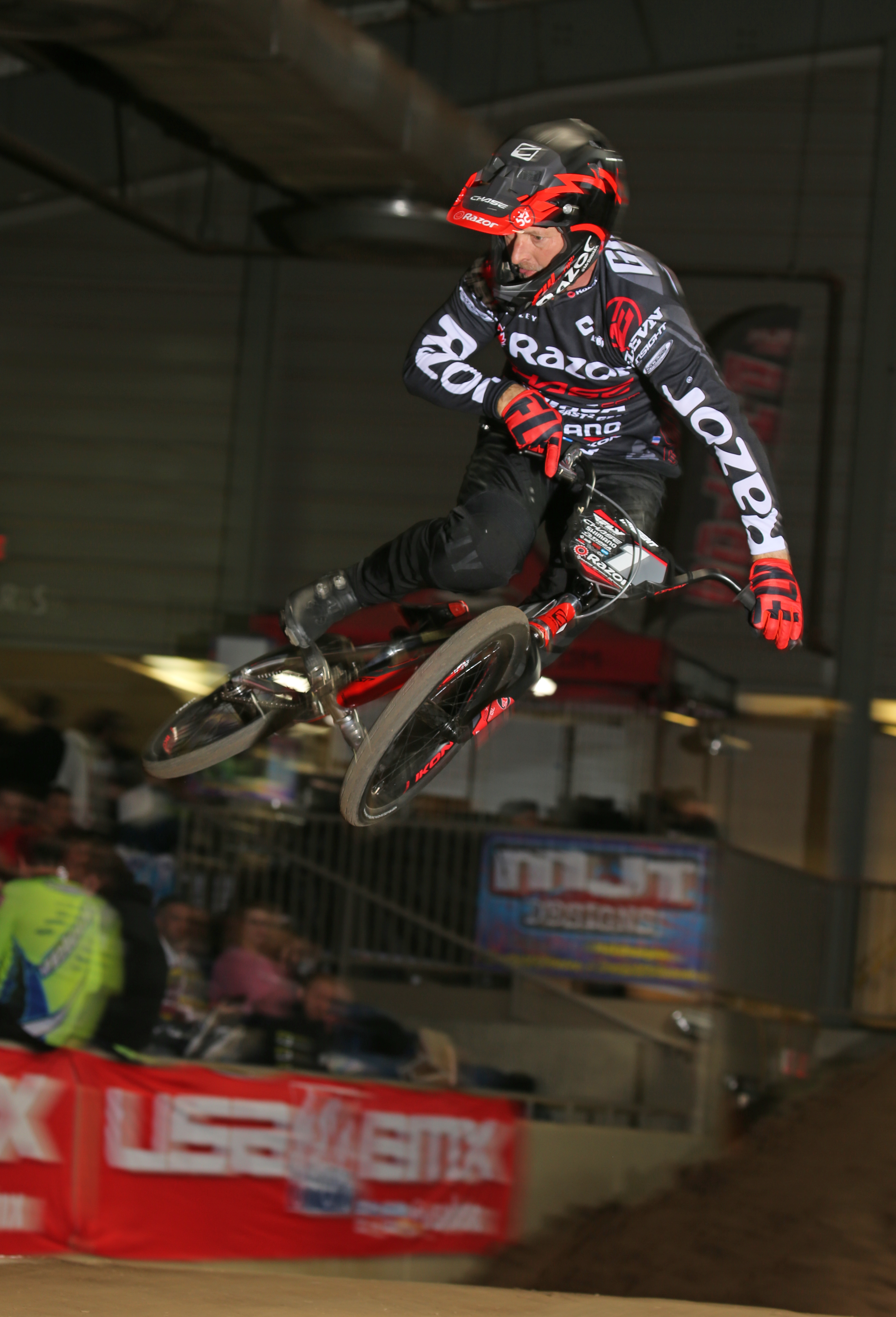 For the first time in his BMX life, Billy Griggs is running a grey NAG No.1 plate. That also means he has a big ol' target on the back of his Razor-Chase jersey. And among those who have that target in their scopes are rivals Bubba Hayes and "The Commander" - Cody Smart.

On Saturday, it was like the Grands-main match-up, only without Eric Rupe in the mix - and Alfonzo Giganti playing the part of The Big Daddy. Mr.Bill grabbed the holeshot, but coming out of lane one, the Colorado folk-hero Bubba Hayes had the inside line on Griggs, and wasn't about to back off in turn one. Blazing out of the first berm was Hayes, but now Griggs pulled up alongside the SE legend and took back what was rightfully his. With Hayes blazin' hard beside Mr.Bill's, Griggs suddenly blew out of his pedal - undoubtedly from over-excessive use of leg strength, as Hayes and Cody Smart fly past him like F-18 fighter jets in a scramble. Their after-burners must've blasted Mr.Bill, as he fell over in the rhythm - unfortunately, landing right in front of Papa-G, Alfonzo Giganti, who had nowhere to go except straight into Griggs.

Meanwhile, out front, Cody Smart made a Pro-like move on Hayes in the last turn, to take over the lead ... or so he thought. Anyone who knows Bubba Hayes, knows that he doesn't give up that easy - and it was a grip-to-grip, axle-bolt-to-axle-bolt battle to the stripe. With the push, amazingly, Hayes stole away the win and all of the glory from Commander Cody.

So - please, PLEASE, spectators and BMX families - heed my advice, and don't leave the races until the last main has ran. I promise you, it'll be well worth your time and these 51-plus ams are guaranteed to put on a show for you and your kids!
They are living proof of what BMX is all about - having FUN, never growing old, and doing BMX for Life.