Welcome to the ROC - the first event of Grands weekend held on the Friday after Thanksgiving. While most people call it "Black Friday" - we prefer Red Friday.  Red, as in red numberplates with a big No.1 on it.

After a long 15 hours of practice over Thanksgiving Thursday, Friday kicks off the first of three action-packed days of BMX racing; with the illustrious red ROC No.1 plate being the reward at the end of the day.

The ROC has always been the Pros last-chance for points, coming into Grands - not many points were gained as the No.2 and 3rd-in-pointer peeps were still in the mains and kept things close. in the Womens class, things were completely wrapped up for Alise, but her ROC win assured that it'd be a bit easier, while Cristian Becereine basically had it all wrapped up coming in.

Practically tied in points, the Chase boys both made the cut in the main - and duked it out first round. But when it came time for Main No.2, most of us were shocked to not see Joris in the gate. Where was he? Did he get hurt? Did you space out and miss the call? None of the above. Food poisoning from bad hotel food had caught up with him and you could say - literally, that he blew it. Good thing Connor doesn't hang out too much with Joris, or he'd probably have been doing the same. Now - without Joris, it was all Fields' race to win or lose. Anthony Dean and Sylvain Andre were out to keep him honest, but it already looked as if the Con-man was unbeatable.

While the last-chance points earned on Friday wouldn't be huge or make up for any 80-point deficit, the win for Fields surely would be a big boost for his psyche.

With well over 500 motos, the 2017 Race of Champions still hails as the largest single-day races of the year. It's nonstop action from Ron Jones' first gate drop until the very last. Red background ROC No.1 plates are awarded at the finishline at the winners are photographed for infamy. And the excitement never stops!

The weekend began great for Answer-Rennen's Marshall Gehrke, and it would get even better by Sunday. The talkative 10X - just like last year, looked unbeatable. At the ROC, the "Major" doubled.

Much to our disappointment, SE's Jason Morris "The Cat" wasn't healed up on time from his Reno race injury, so he was put on Daddy-patrol this weekend while the wife tore up the track and tried to make up for his loss. ...and that she did. Morris' better-half, Courtney Tomei (also a former Pro herself) would wind up with a ROC double and keep things rolling on into Grands in the same fashion. 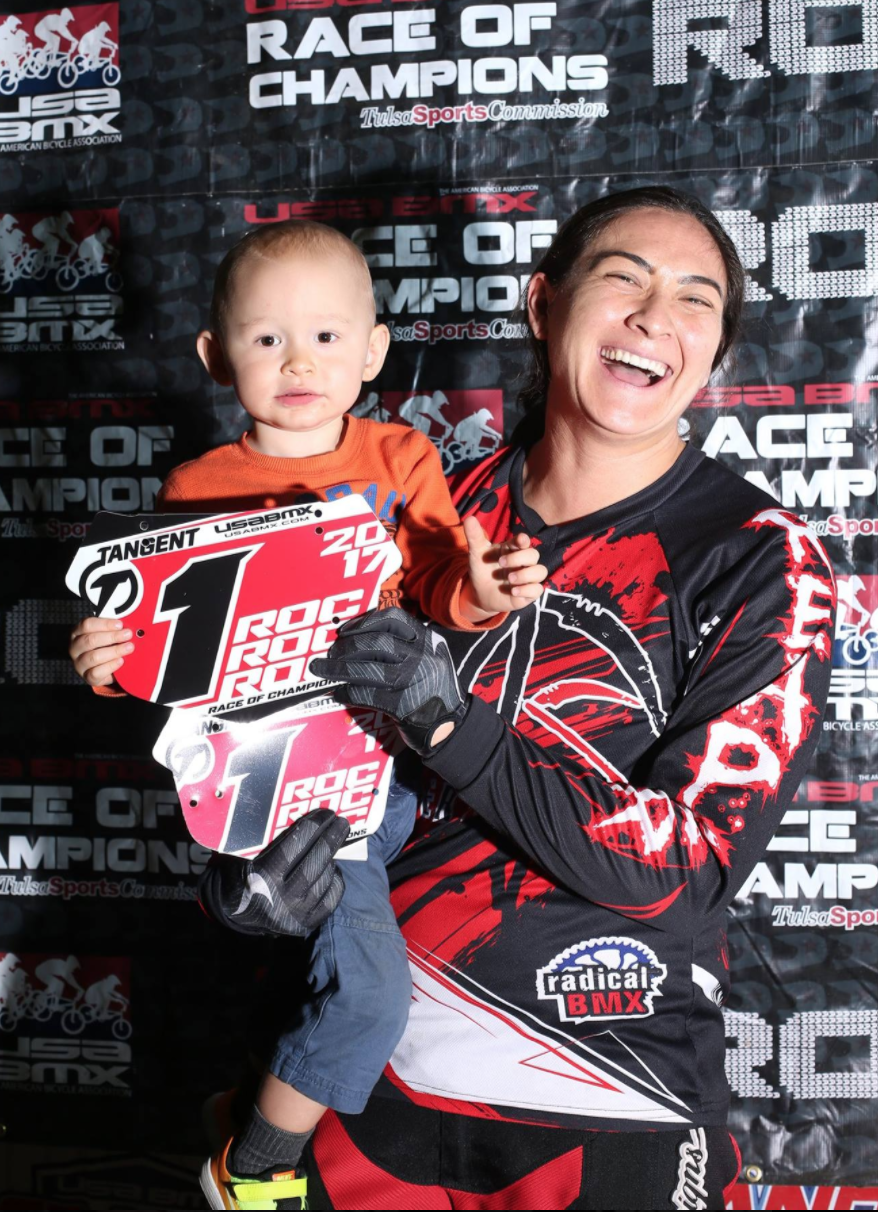 It's become normal to see Elite's Shane Harlow winning the ROC. Seems like he just always steps it up to go home with a red plate. ...and this year was no different. "It's my race, I guess," Shane told me with a big smile. He'd not only win 21-25 cruiser, but also X-Open. As usual, he also did it with a whole buncha style. 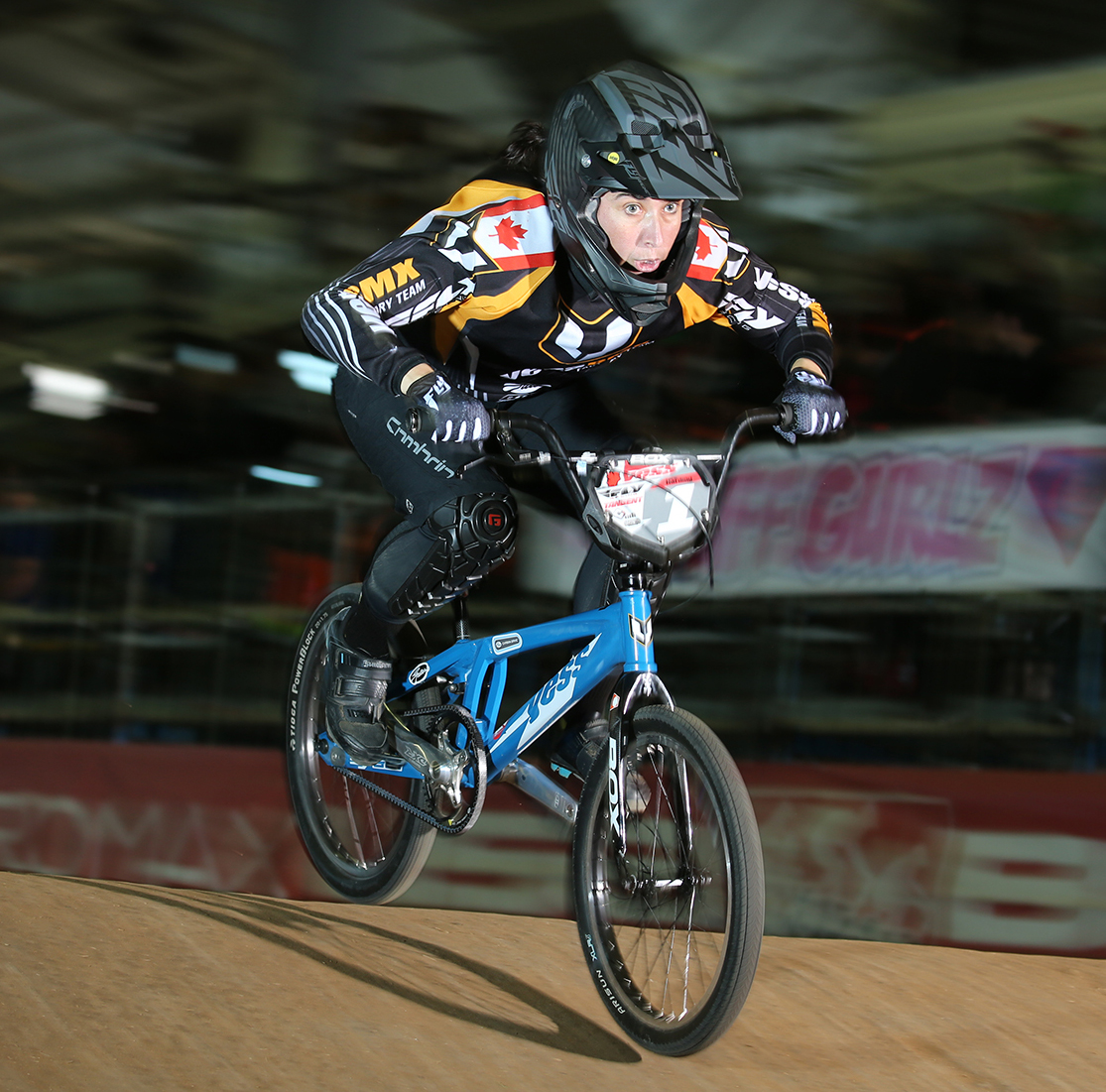 It seems that this year, Canada racers came to Tulsa with winning on their mind - not just the wishful "making a main or two." Whether you credit it to the increased seriousness of the BMX Canada series, or the always-improving skills and speed of Canada's finest - either way, they didn't come here to play.

First up, in the women's field, we had the dominant gals on 24's - from Shylo Orchard to Laurie Harding, Canadian ladies owned the upper-age cruiser classes just as they had last year. Then, followed newly crowned BMX Canada No.1 Girl Piper Graaten in 7 Girls. Riding for the Tangent-Rift Canadian factort team, she'd not lose a race all day.

Another ultra fast Canadian Champion - Alexander Booth, also seven years old, would do the same. He too, was recently crowned a black National No.1 Plate in the North - and was now on a mission to do teh same in America. On Friday, he added a red No.1 plate to his growing collection. The fact that he beat J&R's unbeatable one - Hayden Passanisi, speaks loud and clear of his skills.

But perhaps the biggest surprise in Canadian wins came in 16x; a class that is usually chock full of the fastest American racers - are which rarely loses to International competitors. Doublecross' Zach Frier - who has ripped it up all year on the USA BMX circuit, pulled out all the stop to defeat Dahvin Childs (J&R) and Noah Ramos (U.S. Jr. Devo), Evan Sinchak and Aram Schwinn (just to name a few). Frier is now the ROC No.1 and would be a factor to contend with at Grands.

In the weeks leading up to the Grands, U.S. Jr. Devo rider Kamren Larsen was training for Grands and bailed hard, busting his collarbone with just a few weeks to go. The date? November 5th. Less than 20 days until the #GreatestRaceonEarth. When we heard the news, we figured that was one less rider - two less rider points, for the 17-18x's.

Larsen must be one of the toughest kids in the class, proven by the fact that he not only came to Tulsa but also raced the ROC and Grands (probably a safe bet, against Doctor's orders.), but would go on to win 17-18x against some mighty tough comp. Wong, Lee, Kinchloe, Dey and the Elliott brothers were no match for the super smooth skills of Kamren with-a-K. 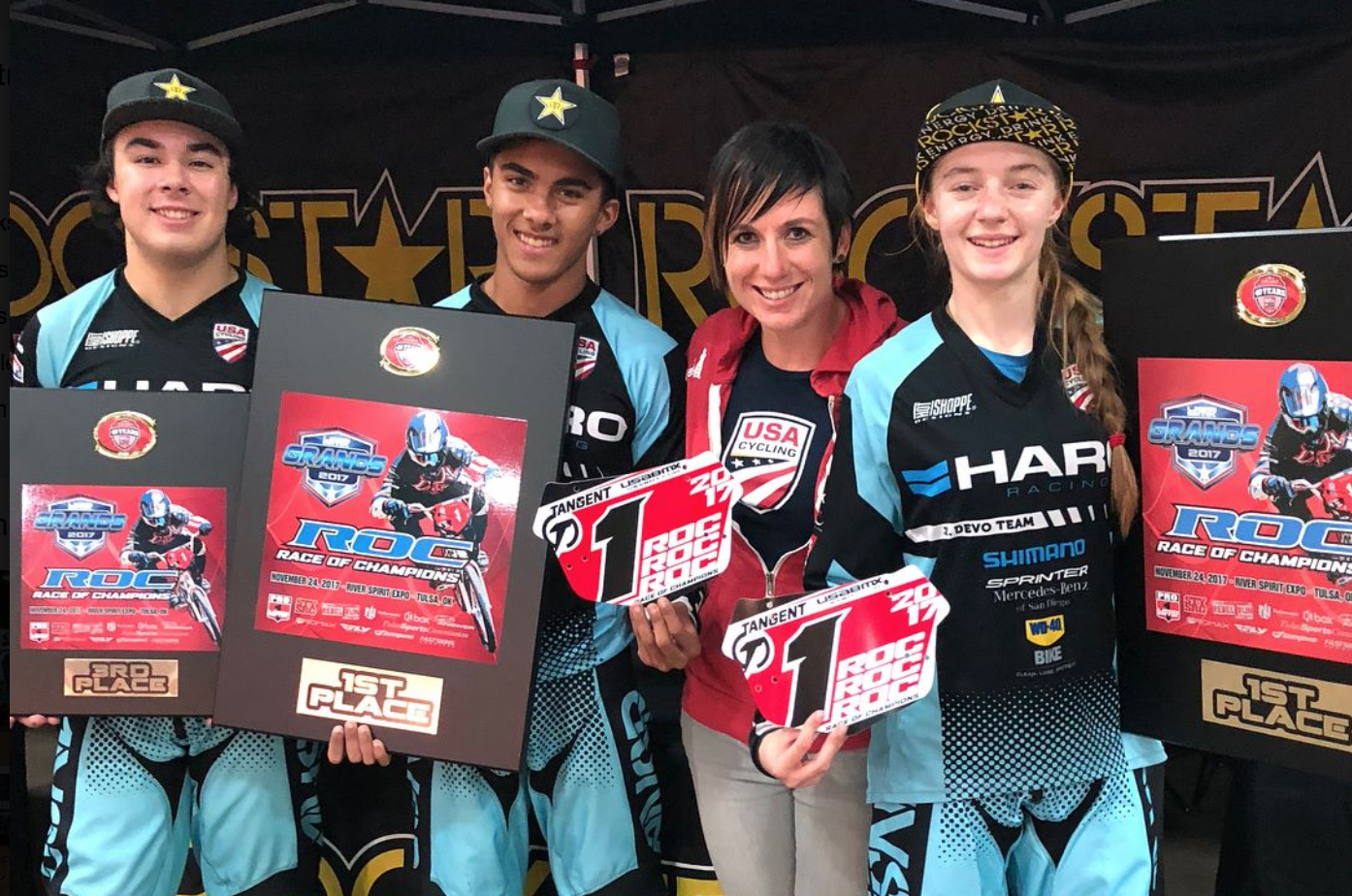 In fact, it was a great day all around for the USA Cycling Jr. Devo Team. Under the tutelage of former Pro Arielle Martin (Verhagen), and with the support of Haro and Rockstar Energy, Larsen wasn't the only team member to take home a red plate. "P-Nut' Peyton Ridenour got off to a good start with a triumphant win in 15-16 girls.

After winning the Worlds on Cruiser and getting World #5 on his 20"harocarbon, the pride of Rum River - Taylor Riedemann has suddenly thrust himself into being the dude with a big target on his back. His nickname of the "Big Tree" is appropriate, since he's about the size of a giant Sequoia. Scoring a ROC win was just the beginning of a great Grands weekend for Riedemann.

This year, USA BMX's new rules made it a tad harder to get an invitation to the Race of Champions, and the elimination of Foreign riders racing class also kept the moto-count down to a more do'able number of motos. So this year's event didn't run as long as last year, and everybody was able to get to bed at a slightly reasonable hour.