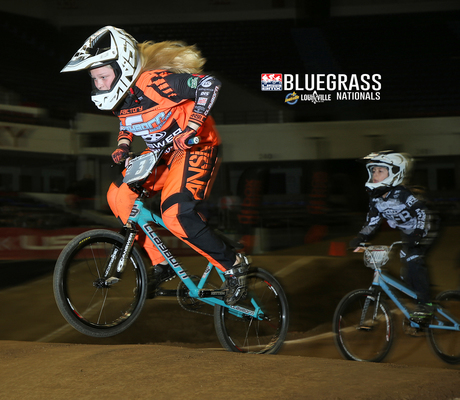 The indoor circuit continued in 2018 with stop No.2 on the 2018 National Schedule, as USA BMX returned to the historic KEC Freedom Hall on the fairgrounds. With 129 motos for the Friday night pre-race, it was obvious from the get-go that everybody came here ready to race and kick off the new year. 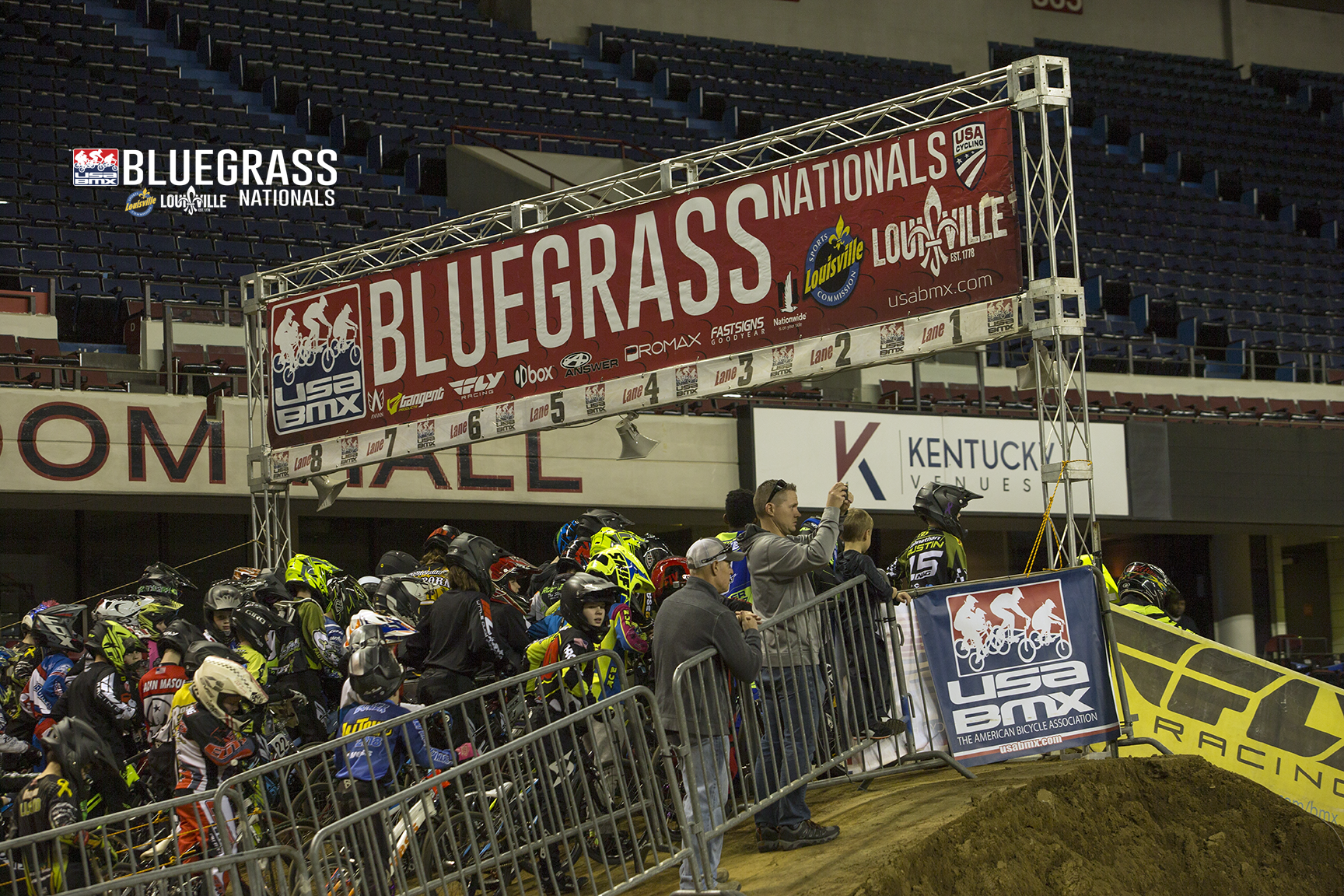 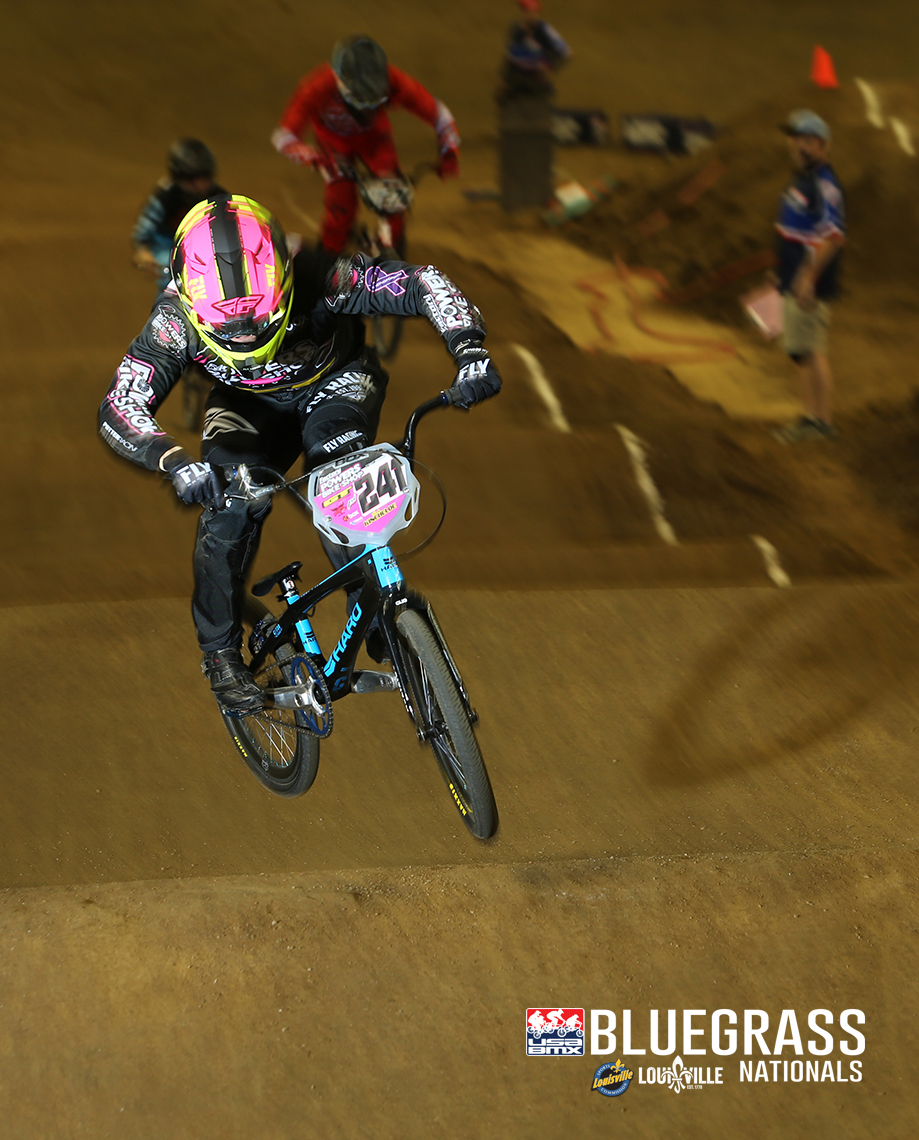 CH, CH. CHA, CHANGES
As soon as we walked into the west wing entrance of the pit-row building, we immediately spied a few new changes for 2018. Powers Bike was all set up with their vending setup and team pit space, but there were some new logos that popped out. GT is their new frame sponsor, and their roster was lightened up a bit. But perhaps the biggest change we were told of, was that their superstar Amateur Brady Kinchloe, had decided to go pro. This weekend would be his Rookie Pro debut - and we were anxious to see how he'd hang against all of the other 2018 Rookies.

Next, we ran into George Costa, over by the ice cream stand - grabbing a double-scoop of the blueberry beltdrive delight. The TM of the 2-time National No.1 Factory team informed us that Justin Knapper had also just filled out a pro application and would be making his debut this weekend.

Surprisingly, Knapper told us Sunday morning that the Pro ranks were more Fun than the Am class; due to getting to race more often (three motos instead of just twice).

It's going to be a tough call come September - when PULL magazine asks you to vote for your favorite Rookie Pro of the year. The field is heavy this year - as it always is.

FRIDAY NIGHT LIVE
With 126 motos for a Friday night pre-race, it was obvious that the BMX world on this side of the country had been itchin' to get back on their bikes and rip up a track. It almost seemed like it was a 3-day national - but this time around, it wasn't. That didn't stop the masses from kickin' things off early for the new season and the packed sidelines stands were treated to some killer racing.

SATURDAY SHOWDOWN
"WOW!" That was a frequent comment heard along the moto-wall, as people got to the far end of the boards and saw 286 motos taped to the wall. As we said - this side of the country has been chompin' at the bit to get the new year rollin' and it was obvious from the first round of motos all the way to the mains.

During the semis, turn two was where all of the action happened. Riders cuttin' the corner hard were slip-slidin' away and takin' down their comp like bowling pins. Fifth and sixth place riders were goin' for it - in those patented do-or-die situations, to make it to the big show. In some case, the ones already in qualifying spots were washin' out while trying to hold onto their ticket to the main.

With 18 riders in the 10 cruiser ranks, they were the largest class of the weekend - so you can assume that the winner could get an early jump on National points with a win or two in Louisville. Free Agent's Avery Fulton got off to an impressive start with a Saturday win, up against some hefty comp in the way of Texan Quay Edwards and Thunderbeach's Harley Dias.

As it has been for the past few years, the older 24 classes also brought out the numbers (and bonus rider point for National standings). 46-50 had 17 riders - tied for rider-count with 8 cruiser.
Former National No.1 Cruiser rider Shawn DiPrete, who is now riding for C-Yaa, had his work cut out for him against Blackcrown's Jim Bramer. Those two put on quite a show, and are like polar-opposites when it comes to size and muscle-mass. In the end, the big, buffed dude said C-yaa to Southpark's wirey one. But the season is young and we're bound to see these two battle it out all year. 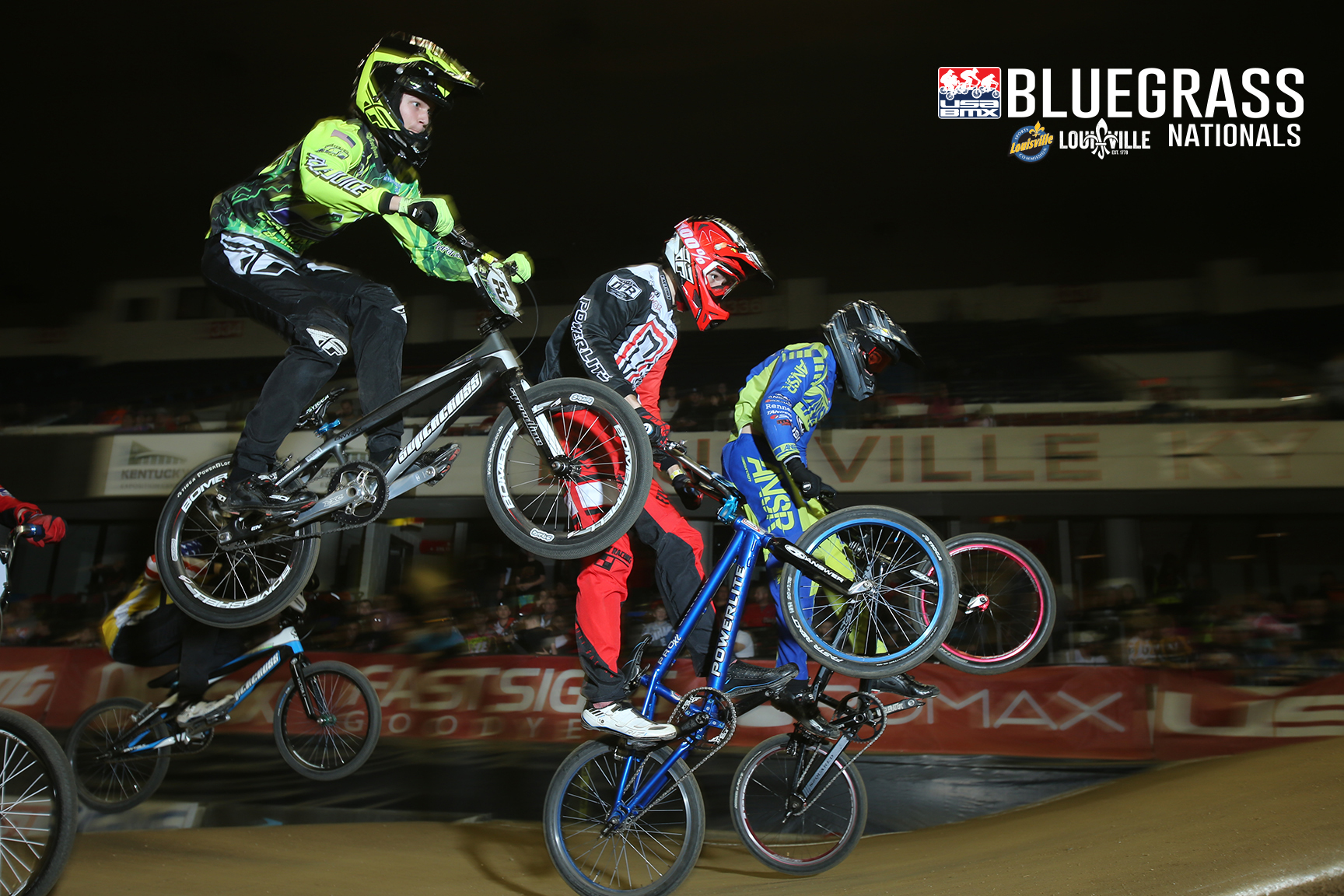 PRO OPEN
Throughout qualifying, the Pro show looked to be the Powerlite show, with Las Vegas dominator BJ Ensey and Nic Munoz frequently seen out front, showing the rest of the rookies the fast way 'round the track. Free Agent's 2017 Rookie Pro of the Year was right on their tails, and was hoping to pull off that one great lap in the final. This was Alec's first race back - after his Louisville injury back in September. Seasoned AA-pros like Elliot McGrath (for Staats~Ciari) was present, on his Catylist pedals, and along with Dan's Comp Tyler Faoro, were hoping to show these young guns how the Elites do it. Faoro was aboard his new FTB (Factory Team Bikes) frame, and said he was loving the new whip.

In the main, we all expected Ensey to nab the holeshot - but it was Munoz who survived the turn two carnage to grab his first victory of 2018. With 23 riders, the Pros really put on a show for their fans. 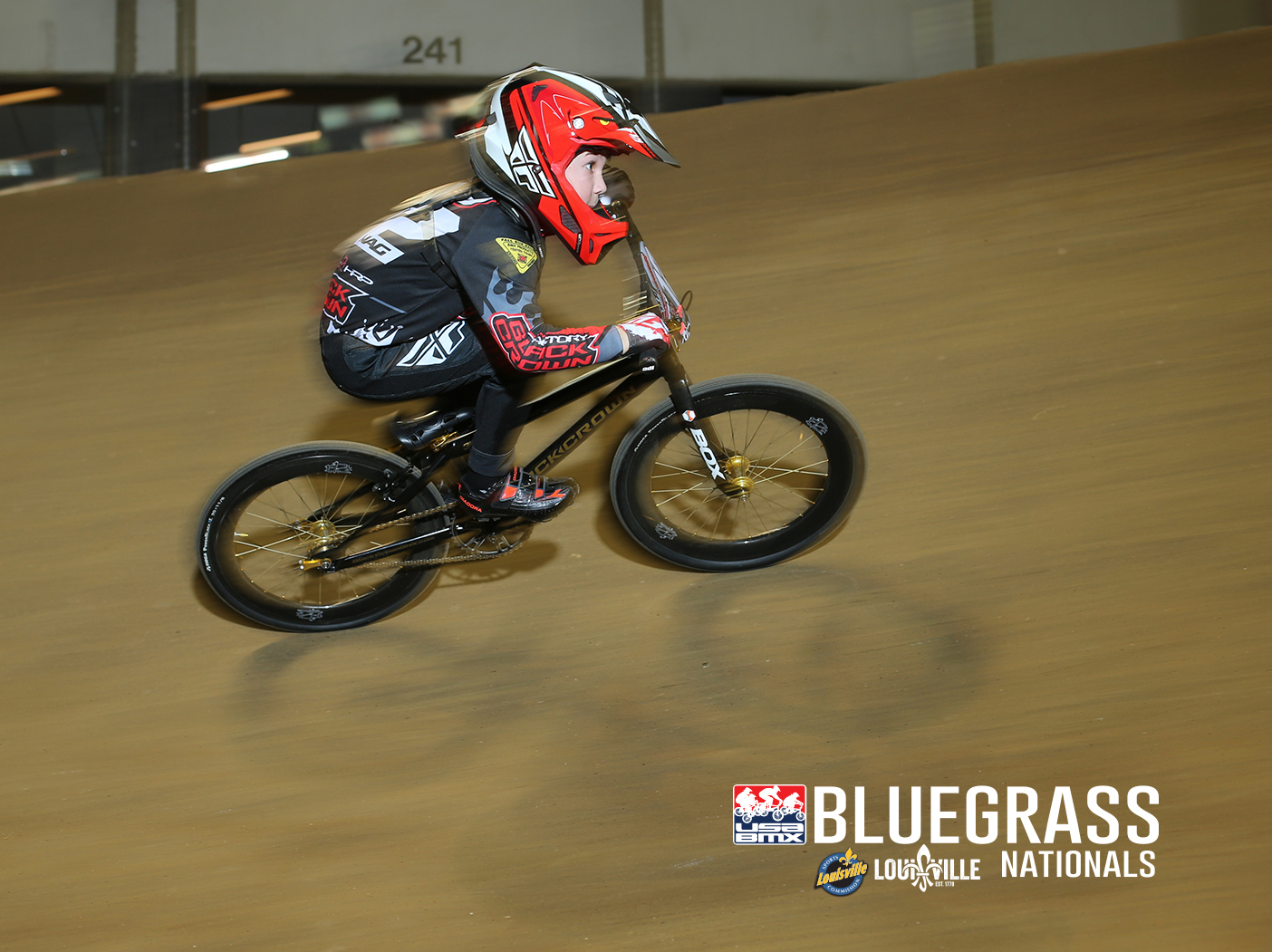 It didn't matter what main you saw in Louisville - it was bound to be a hot one. The track - while seemingly "simple" with not-so-monsterous jumps, seemed to level out the playing field and everyone we spoke to summed it up at "fun."

From the first flat tabletop jump to the good-sized step-up into turn one, each class remained really tight - which made for some exciting races.

THE MIGHTY TYKES
Two of the largest classes in L-ville were 10x and 17-20x, so any wins on those ranks .

UFO's AND OTHER FLYING OBJECTS
By far, the most exciting main of the night was 17-20x; which got a bit hairy in turn two.

FAST FEMALES
The two largest classes for the girls were 15-16 and 17-20 (with 19 and 20 riders, in that order), and each main was packed with some of the top NAG-rankings from last season. In 15-16, it was all U.S. Jr Devo rider Payton Ridenour's race, from start to finish. As P-Nut showed her dominance, Carly Kane and "Skittles" got into some carnage in the corners, while Powerlite's new pick-up Ashley Hayes and Jaycie Sinclair (now racing for Donovan Long's WiaWis team) tried to reel in Ridenour. 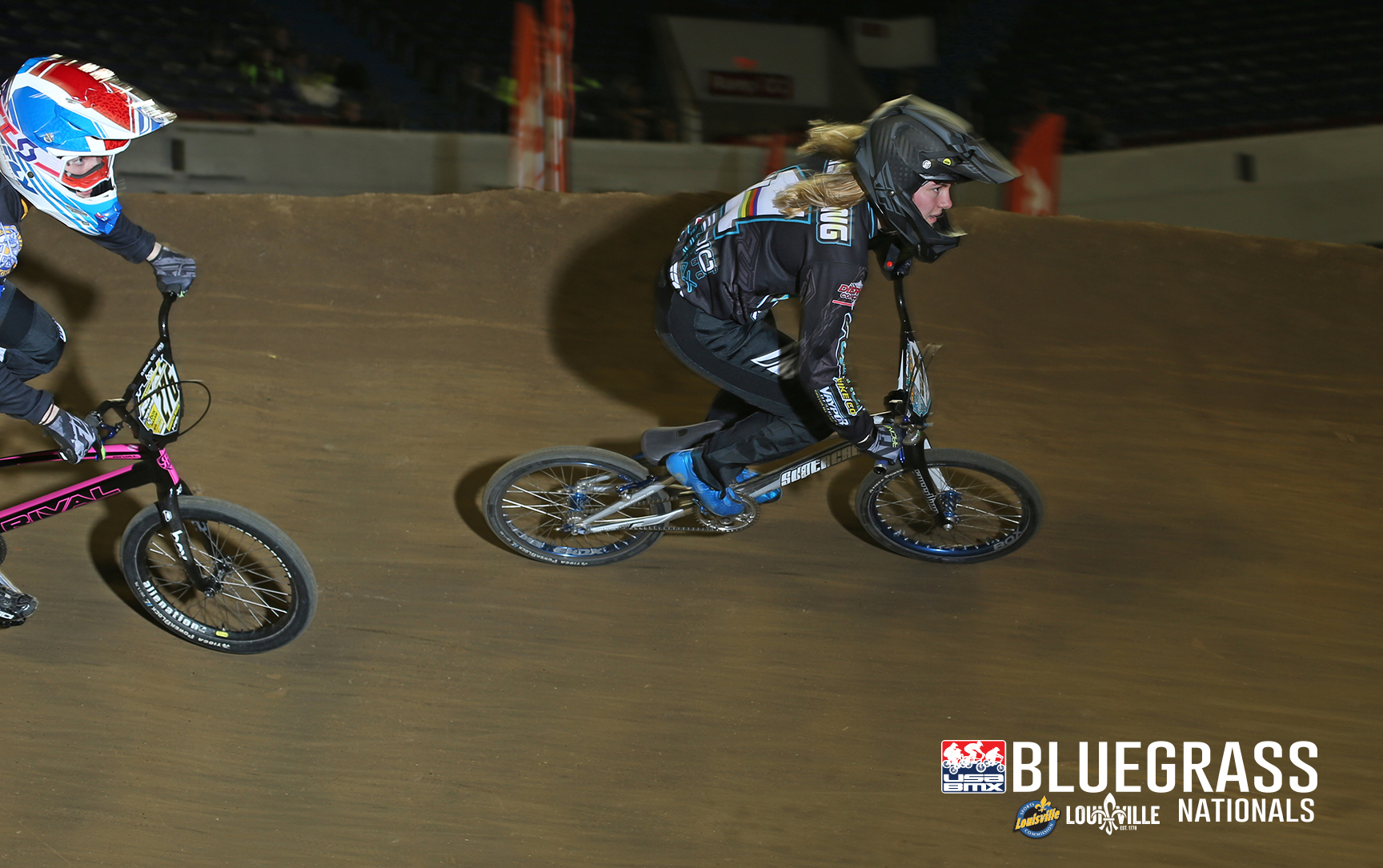 Oregon's Olivia Armstrong - returning to the FullTilt team for 2018, had come to Lousville a couple of days earlier and had visited the campus of Marian University. She was impressed, but also has a ccyling scholarship offer from Lindsey-Wilson (among others) here in Louisville. Armstrong is among the top of those high school seniors this year who every cycling college wants to sign on. She not only has the grades as well as the skills for any form of bicycle racing, but she also brings with her some serious volleyball talent as well.

In the largest girls class of the weekend, Olivia - in the Johnny Cash-like FullTilt kit, completely dominated her comp, with a solid start-to-finish final.