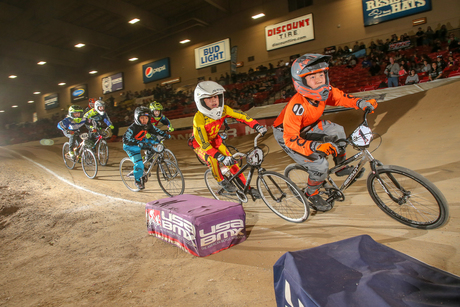 The SoCal city of Corona has quite a history with the

and most legendary downhill tracks. Plenty of BMX

Hall of Famers - like Stu Thomsen, Kevin McNeal, and Eric

Carter have also called it home. But today, in modern-day

Tilt uniform - then the news was announced that you’d

be riding for Box-Components in 2018. How’d that all

RONNIE: It happened all too quick! Right before Christmas

Amateur Program for 2018. My name came up and we went

in for an interview. Everything turned out to be exactly what I

wanted. I have always been supported by Box Components,

while on Haro and Full Tilt. I love the brand and it has been

a winning combination since I started racing BMX in 2011.”

RONNIE: “Have a lot of FUN! To represent my sponsor and

co-sponsors well. Go to all the biggest USA BMX Nationals

to possibly capture the National No.1 Title!”

Are you planning on going to Baku for the Worlds?

RONNIE: “Yes, I want to go and defend my World-1 title and

try to win both class and cruiser. It’s a long flight and a long

ways from home, but we are currently thinking about it.”

particular that stands out the most as your favorite?

RONNIE: “The 11-year-old Challenge main event at the

World Championships in Rock Hill was my favorite. It was a

long day full of fun and excitement. I got to hang out with all

my buddies, representing the United States of America and

at the same time making new friends all around the world. It

was an experience I will never forget.”

racing, or are you really working hard to be on top?

RONNIE: “I am not a natural. I am very consistent and I feel

very blessed to have learned from BMX icons like Richie

Anderson, Mike Redman, and Donavon Long. They are

all excellent trainers and mentors who made my success

possible. My dad was a BMX rider in the 80’s and has had

a big impact on my success. He has been my secret to my

How hard do you work at being as fast as you are?

RONNIE: “I work hard, all around, to try to be consistent.

We go to the track a few times a week. When I am not at

the track, I am at the gym working out two to three times a

week. Mostly I do a lot of reps and work my core muscles. I

am learning new exercises that are really helping me on and

off the track. Most of my training at the track is between two

to four hours. Most clinics and training sessions are three to

four hours. I also do a lot of off track training near my home.

my friends since I started BMX. I have built a lot of strength

and stamina riding the steep trails on my BMX racing bike.”

For you, what is the most fun thing about BMX racing?

and making friends all over the World.”

How much did his support in those early days help

make you what you are today?

All of my BMX foundation started from there. Mike showed

me how to become a great racer. He showed me all the

manners and respect that goes with BMX. Still to this day

he trains and mentors me to be focused and ready! I can’t

thank him enough for all the love I get from him.”

I remember way back in 2012, talking with Bob Morales

- Dane’s dad, and he told us flat out: “That Ronnie Kim

kid is the real deal. He’s going to be hard to beat.” And

then you won your first NAG No.1 plate the following

year and have owned it ever since. What’s it feel like to

be No.1 in your age group for five straight years now?

RONNIE: “First, I’d like to say it’s been a privilege to train

and race Dane Morales. He was so mentally and physically

focused and confident. I needed to do a lot of training to

compete at that level. Dane is part of the reason I had so

much success. To be honest, there has not been anyone

that gave me the type of competition like Dane did. It has

been an awesome feeling knowing you are the best in the

country for the past five years in a row. It’s been a privilege,

with a lot of hard work. Being a Champion

is tough - knowing that everyone is

training hard to take the crown. I know

I must work harder and wiser to keep

what I got. Importantly, I must act and

Of those five NAG No.1 plates - which

one has meant the most, so far?

RONNIE: “My first NAG No.1 was the

I would come this far and win the title

from the toughest champion, competitor,

The record for most consecutive NAG

Jack Kelly. How many more

consecutive NAG plates do you think

RONNIE: “Jack is incredible and he’s

an awesome friend of mine. To achieve

to take a lot of hard work, perseverance,

and training. I will be focusing year by

year to stay undefeated in my age group.

I plan on following in Jack’s footsteps.

So, do you just take it just one race at

a time or look at the entire series or

to the biggest races, facing my hardest

competition, and focus on being ready

for the Grand Nationals.”

In your class, you’re always up

against some mighty tough competition

- from Ty Beadle to Bobby Wasabi,

Wyatt Worth to Michael Villanueva,

all the way up to that Brazilian ripper

Lucas Zimmerman. In your mind, who

is the toughest guy to beat right now?

RONNIE: “Looking back at my past

races, Bobby has been my toughest

competitor. He has a heart of steel and

has come a long way since we both

are all strong competitors that can take

your spot. For example: Wyatt Worth has

He is extremely powerful at short tracks

and will not be overlooked. Lately, Lucas

and Michael have been more competitive

than ever. Watch out for these guys!”

How much does that help you to

gauge yourself against kids one year

riders. It gives me a better idea where

I stand. Racing Open classes has

mentally and physically prepared me to

be better throughout the year. Since my

birthday is in January, most older kids

will transfer out of my class before the

into my class. My goal is to age up and

start winning and each year the gap is

BMX is definitely a mental sport as

much as it is power. What is your

mindset when you get up in the gate

for a National main?

RONNIE: “I try to stay calm as much as

possible right before any main event. I

have a lot of confidence when I am faced

with the same age riders at the Grands

but when I am facing top NAG riders

from one age up, I do get a bit nervous.

I’ve been taught to never doubt myself

so I remain confident that I can win with

anyone in the main event.”

There are so many great things available

for the best racers in BMX - from

glory, or even a future working in

the bicycle industry. What are your

dreams and goals for your future?

RONNIE: “I hope to continue racing

BMX and continue my education. My

dream is to someday be able to represent

the United States of America in the

Olympics. Then I hope to be an innovator

in the BMX/Cycling industry after

We have no doubt that you will succeed

with that mission. Thanks for

the interview Ronnie, and best of luck

to you this year.

Favorite Bike of All Time?

Favorite Thing to Do besides BMX?

Go to the gym and hang out with