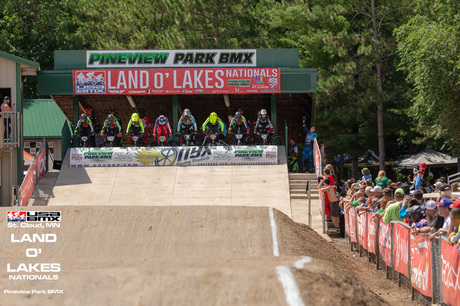 Minnesota was a buzz with activity last weekend with an AMA outdoor Motocross National, the XGames and of course the Land O’ Lakes Nationals. The latter took place at the home track of Alise Willoughby, Pineview Park BMX. This year’s event brought some of the worlds fastest elite men and women to the gopher state.

Alise continued her winning ways and captured the top step of the podium during both days of Pro racing.  Day one saw a determined Felicia Stancil grab a second and Brooke Crain in the third slot. On day two Brooke would step up one spot to second and New Zealand’s Zoe Fleming would score the third.

On the Men’s side, Chase pro Joris Daudet was unbeatable, but his teammate Connor Fields was right behind him with a second each day. Connor has been recovering from a crash in Florida in February but looks almost back to his #1 Pro form. Scoring the third each day was Rift/Tangent’s French National Champion Romain Mahieu, who has been in the states for just a few weeks.

The showdown of defending #1 Vet Cristian Becerine and newcomer Tyler Brown was on once again this weekend and TB316 added another couple wins to his effort to become the new vet champion. Cristian definitely kept him honest with a pair of deuces and the elder statesman of the class, 49-year old Domingos Lammoglia, brought home third place honors on day one. Third place on day two went to the always-smiling Luciano Roque.

The A Pro class was slim with six and seven riders but the racing was some of the best on the weekend. J&R Bicycles’ Dakota Cody was on a mission and had to come from behind on a few occasions but he’d secure the wins each day. Tyler Smith brought home second place each day and an unsponsored Austin Palasota finished in third on day one with Supercross’ Makieva Hopson taking that spot on day two.

Looking at the amateur standouts for the weekend we have to start out with another Supercross hotshot, Justin Perkins. The May 2018 cover boy came all the way from Arizona to terrorize the 9 Expert class and that he did racking up 3 wins.

Another dominant little guy was 10 Expert Minnesotan Cole Frederick. He never lost a lap the entire weekend, at least that we saw. The world champ has been darn near invincible not only in his home state but also just about at every national this season.

Australian Kye Affoo, who is currently living in Minnesota, has been a force all season long in the 17-20 Expert class. After playing second fiddle to Anthony Bucardo last weekend in Vegas, he stood atop the hottest class in BMX right now. We can’t wait until Tulsa to see if he can earn himself a NAG #1 title.

The ladies also tore up the track this weekend. 14 Year Old Teigen Pascual went double-double-double in the 13-14 Mixed Open and 14 Girls class. The Rift Tangent sponsored Canadian was on top of each lap she raced.

“Skittles” Mckenzie Gayheart took her rainbow-colored Throdwn frame to the top of the class all three days in 15-16 Girls.  She jumped her way down the second straight to victory.

All in all, the weekend was just about perfect. The weather and atmosphere was envied by a lot of folks with the summer heat wave going on just about everywhere else. If and when the USA BMX national tour returns to St. Cloud you should definitely put this one on the short list. The Minnesota “nice” moniker is certainly true.