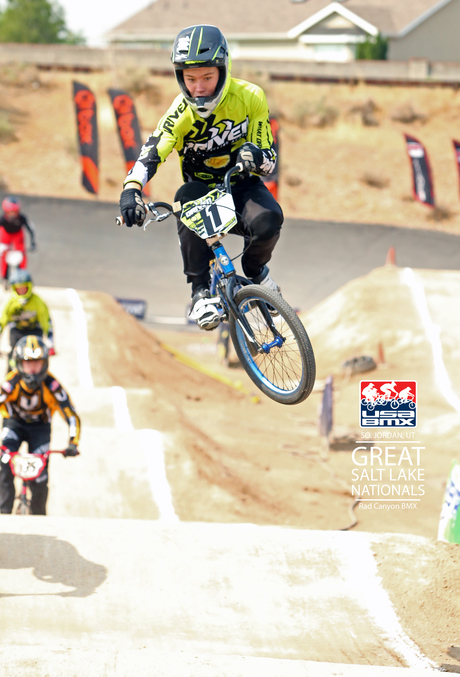 Rad Canyon BMX has been a traditional stop on the National series since the mid-90's - due to its stellar facility and central location. As a suburb of Salt Lake City, there is a ton of cycling fun all around South Jordan - including next week's Tour de Utah road series. But this weekend, this first week of August, there was the Great Salt Lake Nationals.

TGIF
After a very short break for mother nature to water the track (and top it off with a big o' hail), Friday's pre-race got goin'. The track, as usual, was dialed in. The pros kicked off the action, and we saw a couple of fresh faces to the top-tier of BMX - including Extreme's Hunter Brown and ginger-headed Utahnian Ethan Alvey.

While a couple of the "bigger" name pros sat out the pre-race, it was all Tyler Faoro's to win or lose, and rookie pro Hunter Brown kept him honest after a little crash 'n burn in turn two took out most of the pack. 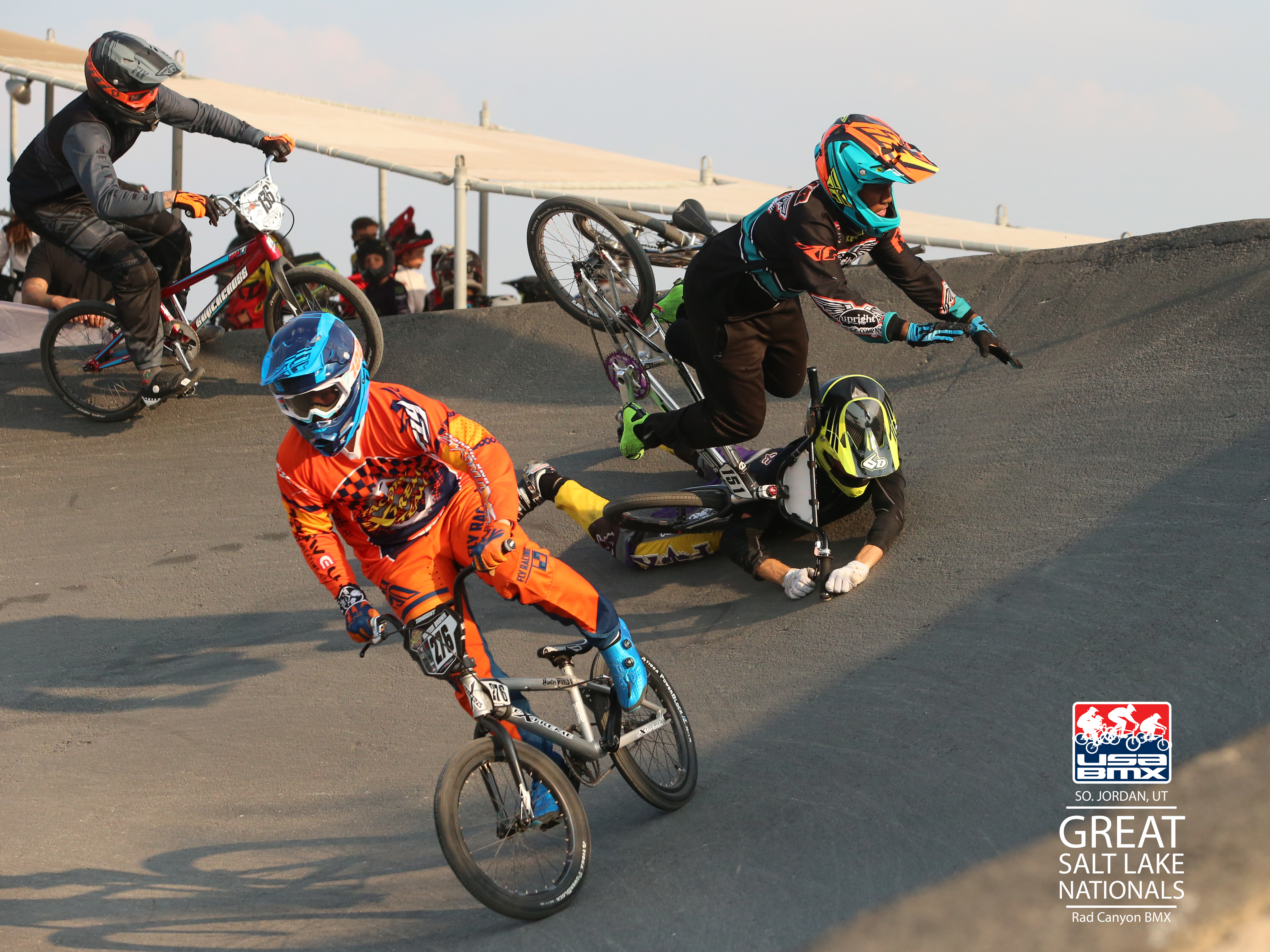 For Saturday and Sunday, Jeff Upshaw and USA Cycling Jr.Devo rookie pro Kamren Larsen showed up and wreaked havoc in Pro Open. Upshaw took the win on Saturday, while Larsen scored another victory on Day 2.

THE 8-YEAR BATTLE
We've all heard of the "hundred year flood" - right? Or those rare lunar eclipses that seem to only happen every fifty years? Well, in BMX - this weekend saw one of those similar rarities: The 8-year Battle, between FullTilt's Gavyn Fox and Supercross' PULL cover-boy Justin Perkins. Rumor has it, that because of their "odd" birthdays, they'll only race against eachother in another eight years. We didn't do the math, but you know how those Factory Dad's are on specific details. We believe 'em.

Fox - aka "The Mohawkian," is a Rad Canyon local, while Perkins is the reigning NAG No.1 champ who's been having another great season. This match-up, starting on Friday night would be one of the major showdowns of the GSL's. The two are pretty evenly matched, and it'd be a toss-up tryingto predict the winner.

Fox was stoked for this; not having a backyard national - but he was also featured on the USA BMX national decal for the weekend. His job was to defend his turf, and he did it well - winning both Friday and Saturday.

Perkins, on the other hand, put up a great charge on Friday but was hurtin' from heat exhaustion on Saturday. He wasn't able to put up a fight as we'd hoped, but receovered strong for the Sunday win. 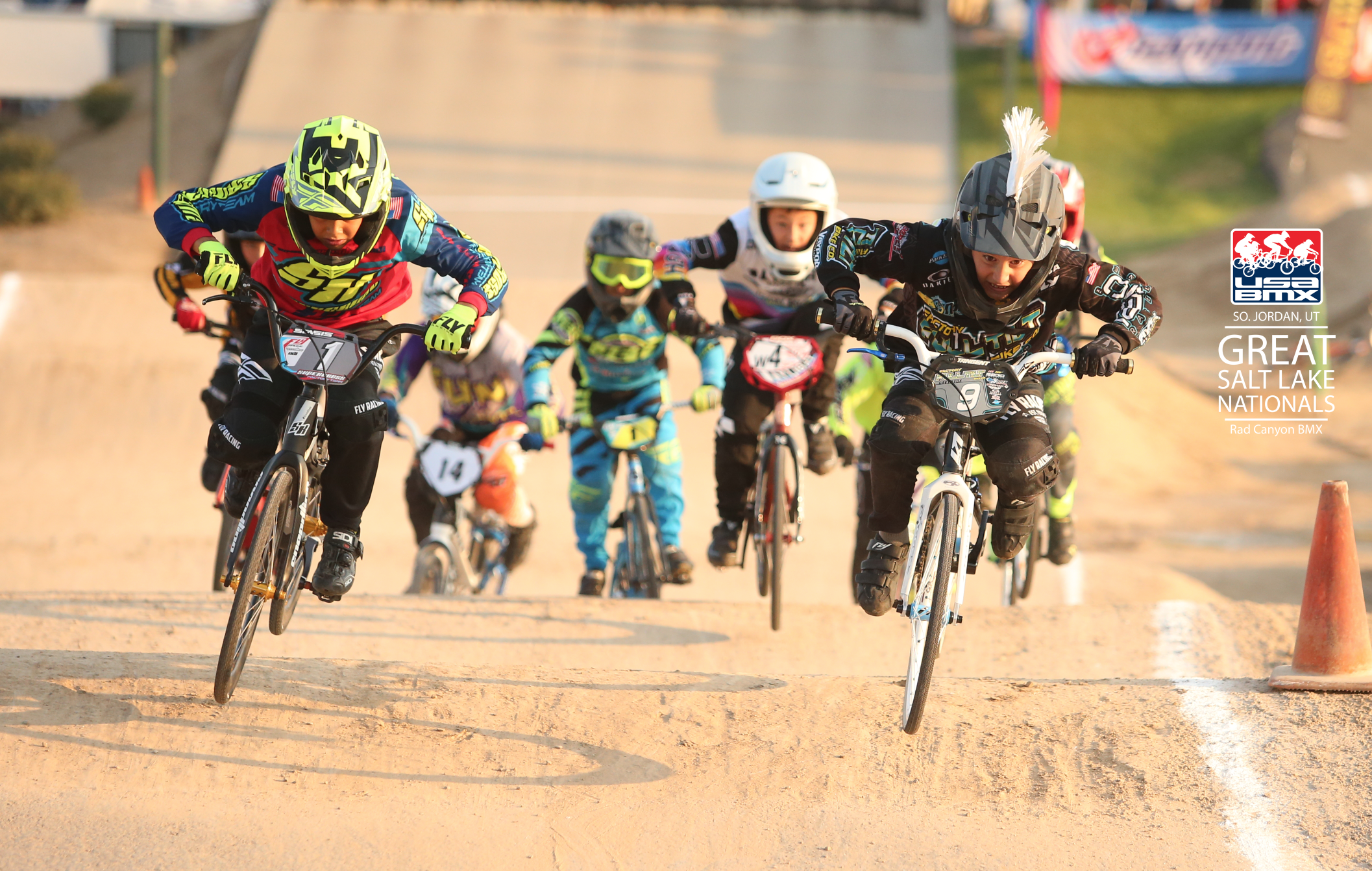 PRETTY FLY FOR A WHITE GUY
Fly Racing's longtime BMX salesrep of the decade, Ray Hudson, used to be mighty fast. And before you get all mad at this writer - Ray will be the first to tell you that he "used to be." The former A-pro and Nac-nac King of Idaho, has been doin' BMX since he was a pup and a string of injuries over the past five or six years have kept him off of the top of the podium at any race. 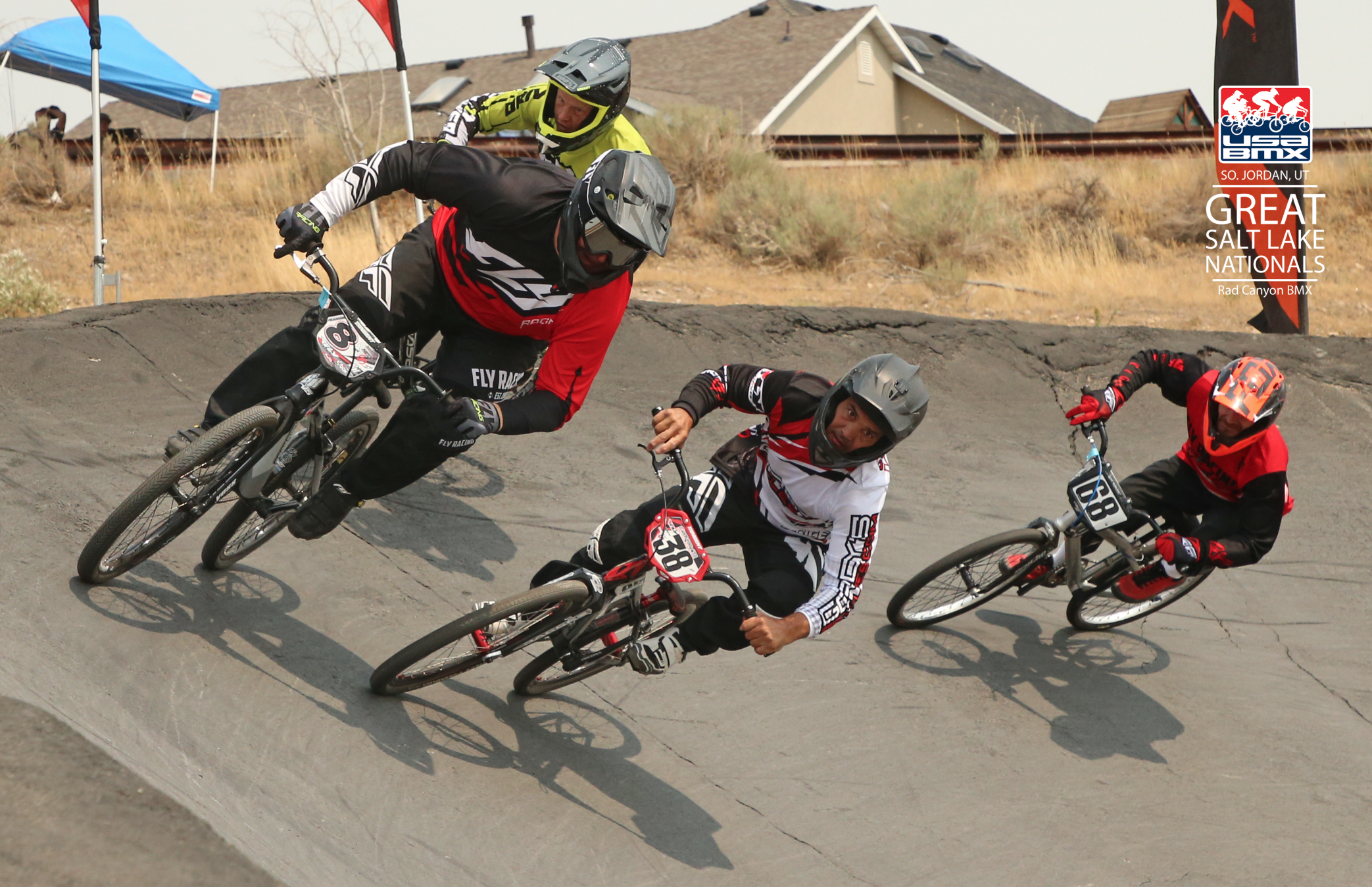 On Saturday, Ray broke a six-year drought of wearing that "L" on his forehead. Maybe it was him donning the sharp new 2019 Fly kit, or maybe he's finally got the ol' snap in his step. For whatever reason, Ray Hudson proved that you should never give up, and alway have fun. For the rest of the weekend, "Sugar Ray" has a sweet ol' smile on his face. He's an All-star. He's a rock star.

The 15-16 year old girls class has been on fire this year! No matter where the USA BMX national circuit travels to, you are always guaranteed a good turnout and an even greater race for the win. In Utah, we had the "P-Nut," Payton Ridenour make the trip out west, to take on Colorado's dynamic Duo of the Hayes twins on their Powerlite rides. P-nut's teammate - USA Jr. Devo rider Maddie DeSantis, freshly turned 15, was also in attendance and has quickly adapted to this combo-age class. Dk's Carly Kane also came all the way out here from Indiana, to try her manualing skills on Rad Canyon's two rhythm-filled straightaways.

And then there is Gordy's Lexis Colby, who has been on a tear as of late and has her eyes firnly set on capturing the National No.1 Girls title come November. With three groups of 17 riders, this class was stacked and action-packed! Colby scored yet another win on day one, but ran into troubles in Sunday's main, as the Hayes sisters went 1 and 2. AS Colby and the Hayes' climb a little higher in the National standings, we can hardly wait to see how the 15-16 Girls final goes down at The #GreatestRaceonEarth!

YOU"VE GOTTA LOVE UTAH
If you're never experienced Rad Canyon, with it's incredible track and awesome facility (complete with full sets of bleachers lining both sides of the course), you need to. It never ceases to amaze us why this race isn't pulling moto-counts in the 200 to 250 range. It should. Saturday's 160 moto count was a tad disappointing for all attendees, as those-who-know know that this event is a don-t-miss stop on the National tour.