While much of the United States was covered in snow or ice this weekend, the BMX crowd was able to escape the frigid temps and went indoors, to the plush confines of Tulsa's Ford Truck Arena - for Stop #3 of the 2019 national series. Inside the warmth of the building, which is located right across the parking lot from the big Grands Expo center, the USA BMX crew built a sweet track for the weekend's action. Switching things up a bit, this was a U-in-a-U design, which had a cool camel for the first jump, a wide Daytona-like first turn and three consecutive sets of doubles down the second straight. After cranking thru the whole first turn, racers had a TON of speed going as they exited the big ol' bankage, and jumping these dubs would be no trouble. It was GREAT to see more wheels than usual defying earth's gravitational force! 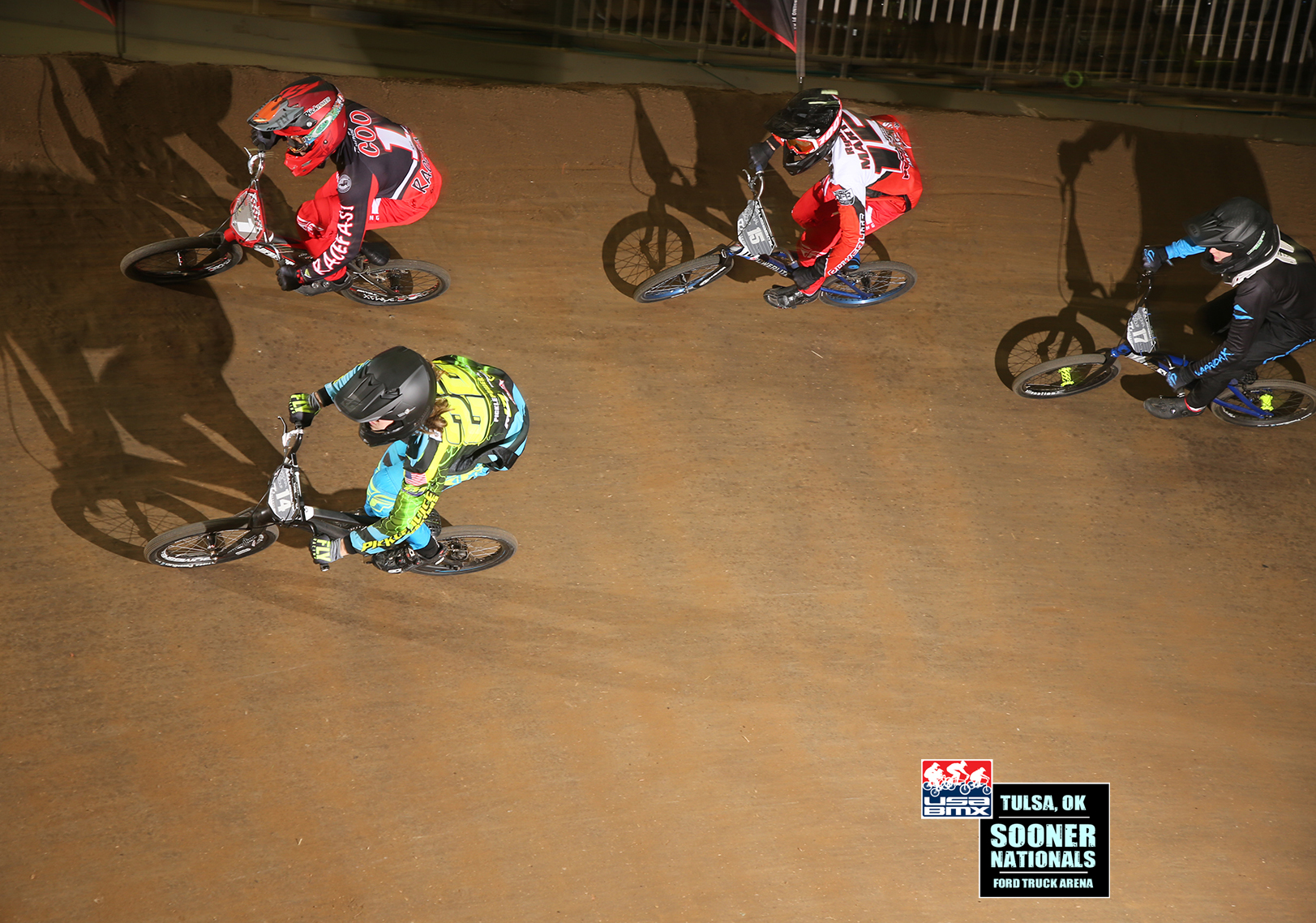 At the end of the jump-infested straight came the #TulsaTurn; which was easy to spot from afar thanks to re-purposing the 8-foot tall T-U-L-S-A letters from Grands. It was a cool touch, and best of all - not one single rider this time attempted to take out a letter or buy a vowell!

This was also a Presidents Cup race; which meant riders were out for individual point chases in their ages, as well as the State-vs- State battle that was the backbone of the Prez Cup tradition when it first began way back in the 80's. For the past eight years or so, California has reigned supreme in the P-Cup and this year would be much of the same - although Texas and Arizona made 'em sweat for a little bit.

Here is how all 38 States in attendance came out: 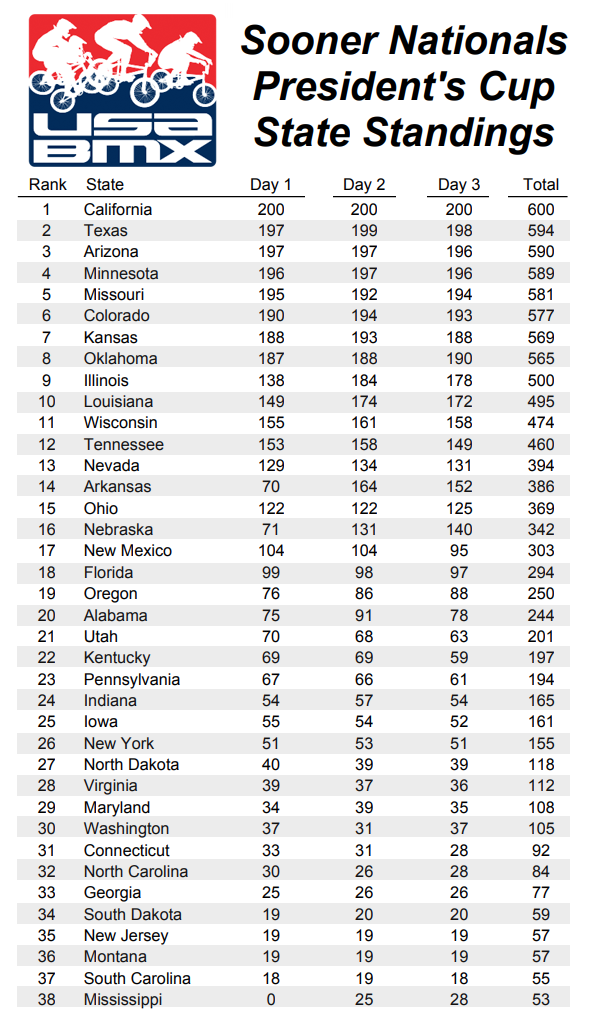 If there were a President's Cup for Pros, Free Agent's star college student would've won it. Bob, wearing his Marian U jersey all weekend, was the Man to beat - and came out on top all three days. The other two spots on the podium was mixed around each day; sometimes with new rookie Pro Justin Richmond up there, and at other times AA-pro Jake Peebles holdin' it down. It was also good to see the return of DeSoto's Brandon Elmore - now donning Extreme Team colors, showing that he hadn't lost much speed during his time-off from racing.

After USA BMX came two straightaways away from handing over its first No.1 Amateur cup to a foreigner, the Australians are back again in 2019 - seemingly stronger AND faster. And if all goes as planned, we might see more than just one Am from down unda' up for the big silver Cup come November. Chances are, they'll also be wearing a Full Tilt uniform.

The newly crowned (defending) No.1 Factory team - Full Tilt, brought in their big guns from Oz. 13x Tommy Tucker and 17-20x Kye Affoo returned to T-town, and proceeded to tear up the track. Tucker was unbeatable all weekend, scoring three straight 13x wins to secure himself a Presidents Cup.

In the tougher 17-20x ranks, Australian Affoo was hoping to get himself some Tulsa redemption. If you recall, the last time we'd seen him here in Tulsa, he was flying over the bars at speed, while leading the Grands main, sending him bike high into the air and nearly clearing the goal posts of the big Tulsa letters. But, unfortunately for Affoo, it was not to be this weekend.
Instead, he racked up a whole lotta seconds. On Friday and Sunday, the wins went to Alpha's new pickup - Cam Wood (the NAG-5 Challenge victor from last November), and on Saturday, Affo's teammate Race Lee picked up the big win. 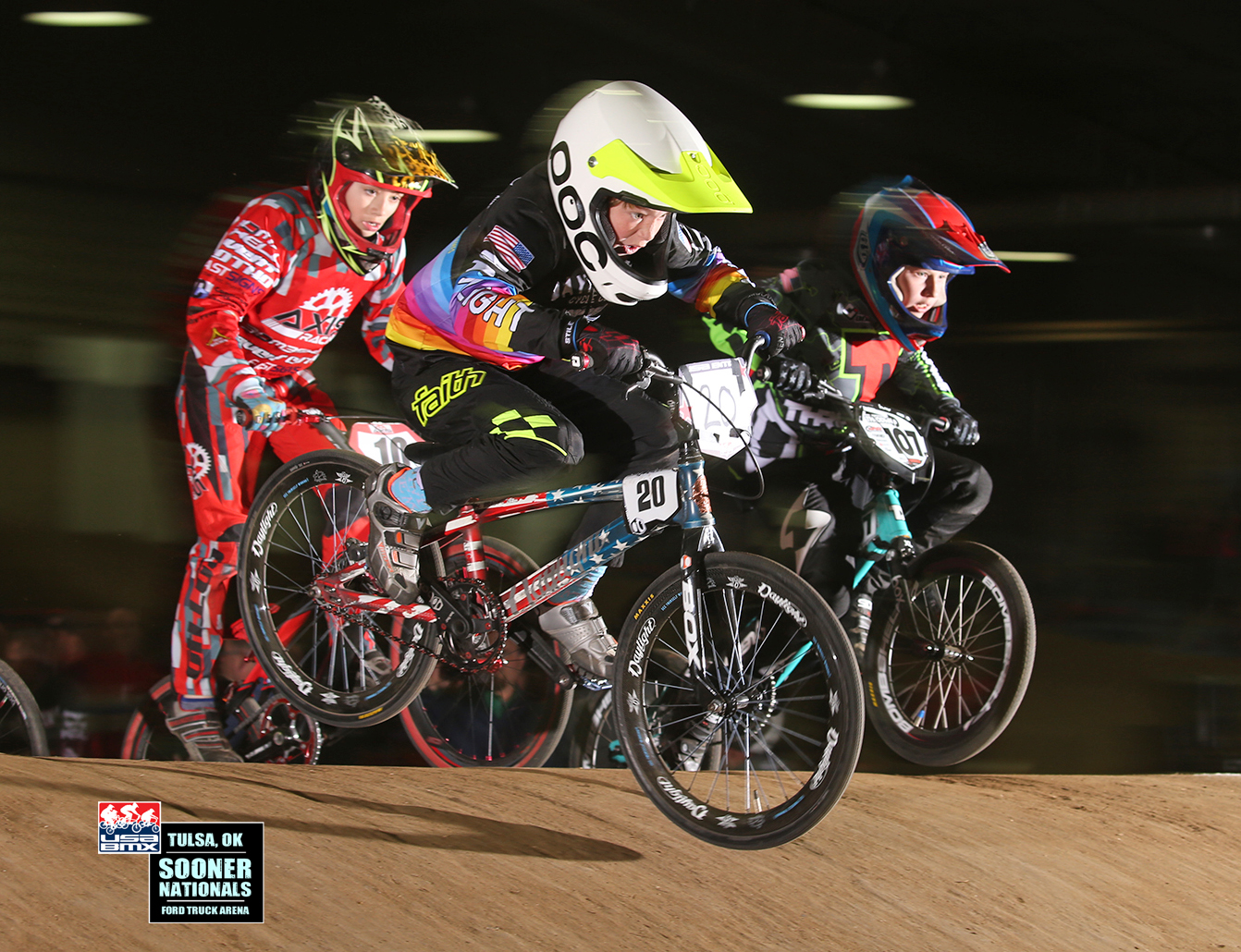 For many of us, this was our first time to see many of the new factory riders on new bikes, wearing new colors and racing for new teams. There have been quite a few changes since we were last here in Tulsa. As we'd just mentioned, Cam Wood is making his Alpha ride look impressive - winning 17-20x twice. The switch-overs from Throdwn to FullTilt were goin' hard and helped their leader, Jim Buchanon, win Factory team all three days. (Of course, the odds are in their favor, when they've got 2 or 3 guys in each expert main event!)

THE COOLEST NAME IN BMX

Over the years, our sport has seen its share of riders with cool names. From Chase Digit to Tank Carder, there are just some names that roll of your tongue and sound tough. Currently, we'd have to say that the one rider with a name that is destined to become a NASCAR driver is Rowdy Holzer. As the eventual winner of the Presidents Cup for 9 year olds, Rowdy's dad told us that he was named after

One of the best battles at the Sooner Nationals was between these two top contenders in 15-16 girls: Full Tilt’s MacKenzie Gayheart and WiaWis’ Jaycie Sinclair. Neither one was backing off, in a battle of elbow-to-elbow combat. Things got even crazier when they had to do a re-start in one round of motos, due to a downed rider on the track and track official Zach Allen doing a scorpion to faceplant after Skittles dove low and gave him the smack-down. It was one of the most viewed videos of the weekend, after macKenzie posted it on her IG and FB accounts, writing "Sorry, dude."
Despite wins on the first two days, Skittles lost the President’s Cup to Sinclair after a hard crash in the main on Sunday. Her 1st-1st-7th score of 54 pts, lost to Jaycie's consistent 2nd-2nd-1st and 58 pts, for the #PrezCup.

Overall, Tulsa was more awesome than ever. The track is always top-notch, the temps are always perfect INSIDE the building (no matter what it is like outside - and it WAS a cold one in the parking lot). And judging by the tight action in the mains - and the too numerous to count wins by riders in Full Tilt gear, we'd say that it is safe to assume that 2019 is going to be intense over the next nine months.

Tulsa; it was fun. We'll see you again in November!