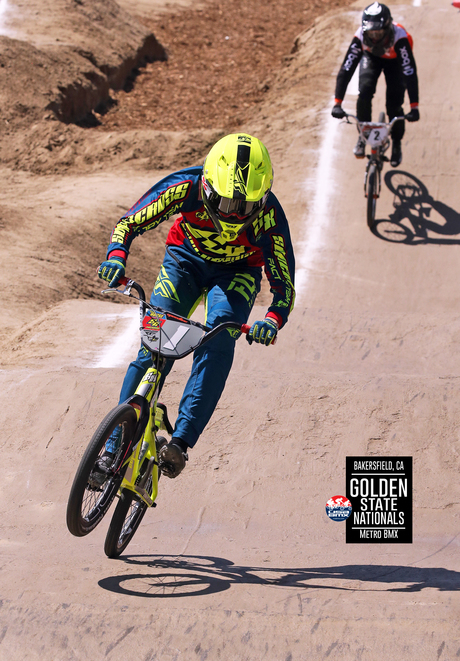 THE TRACK
We kicked off May in a big way - as the BMX World headed to centrally-located Bakersfield, California, to Metro BMX. With such major improvements to this facility over the past few years, this was the third year in a row racing on their slurried surface and smooth, concrete turns. This year, we arrived to find a huge concrete pad from the finishline all the wat aruond the second turn, up to the starting hill. This meant no dust being kicked up as riders crossed the finishline - making it refreshing for the spectators.

THE TEAMS
As home to plenty of top-notch Factory riders and teams, the talent runs deep in Bako, and the racing was even hotter than the temperatures this weekend! As home to the the RaceFast squad, all of the top points-chasers in the Bike Shop category would be out in full force, and ready to score some extra points. Scott Angus and his J&R Bicycles team, along with the (da, da, DA, DA, DAA, DAAAA) BMX Sharks, we'd surely see some intense battles for the bike shop wins.

Now without the big-score of Peter Choat (since he left to ride for Throdwn), RaceFast had a slight disadvanatge - but still has plenty of stars that shine. Right now, only 34 points separate #1 to #3, with J&R in the lead, followed by RaceFast and the Sharks in third.

Donavon Long's carbon'ized WiaWis crew wound up with the Saturday win, edging out Answer Factory and FullTilt, by a solid margin. While a 209 score isn't bad, it could be a throw-away by the end of the year, at the current pace they are racing at. Could Donavon and his team win yet another silver Cup this November? We've lost count of how many he's already won.

THE PROS
Although this wasn't a Pro series race, you'd never know it - as plenty of top-notch AA-pros came out to join co-track operator Jordan Miranda on his awesome track. Haro's U.S. Olympian Nic Long just loves to race, and it was cool to see him here at "just a regular National" - hanging out with the fans, signing autographs ...and scoring first place money both days.

Where was Shibby?! Rookie pro Anthony Bucardo was again on the podium, scoring thirds both days for the Alpha posse (even after being a no-show for the first round on Sunday morning), while Throdown's Zach VanKammen and Jet-setter Jake Peebles split the 2nd place spots for the weekend. It was cool to see so many top pros making it to a regular-season national, and putting on a show for the fans.

THE MAINS
As if the qualifier rounds weren't action-packed enough, the intensity kept building up through quarters and semi's, until we reached the crescendo of the super exciting main events. 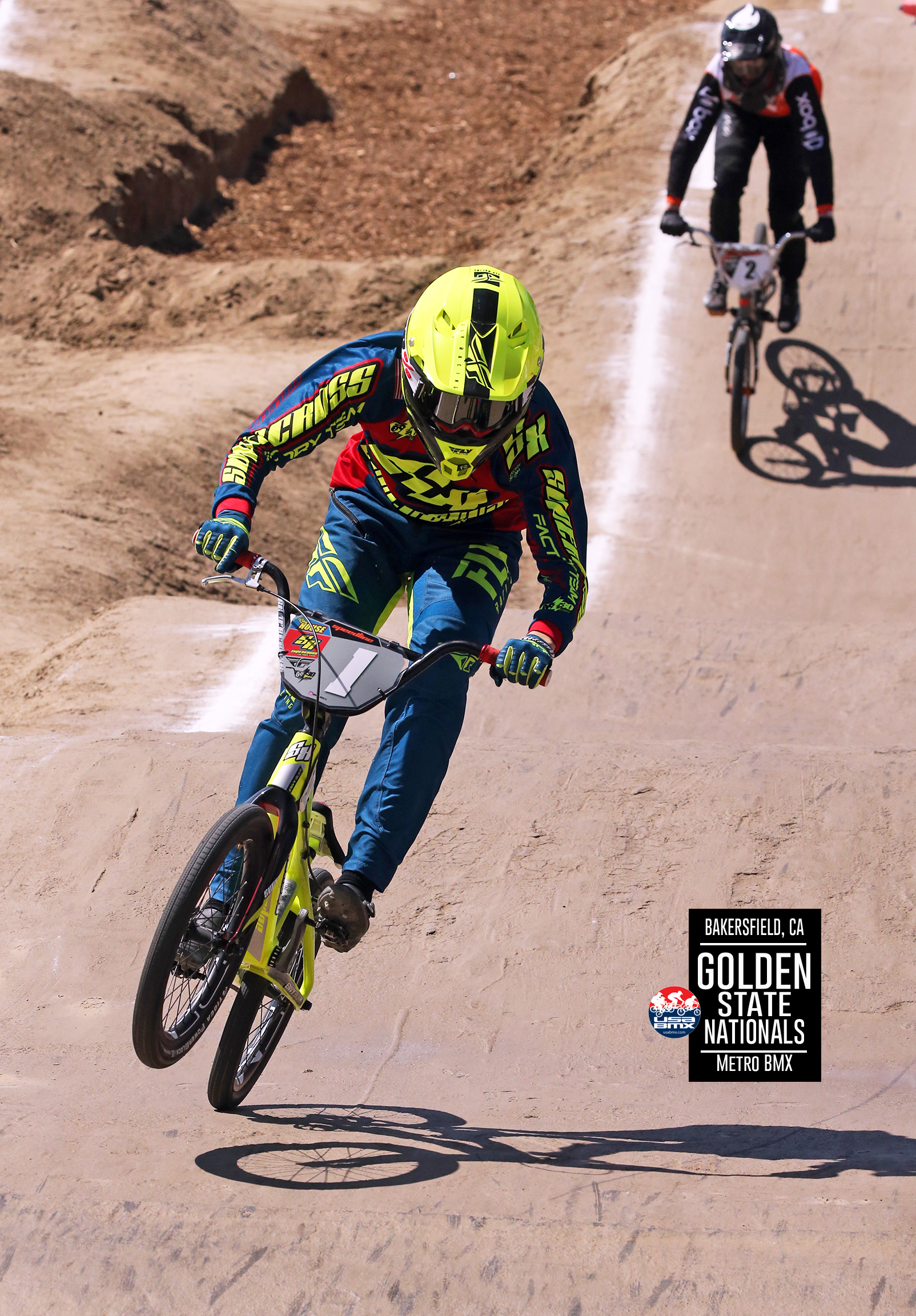 When it comes to mains, the one that everybody is always anxious to watch, is 17-20x ...and this weekend's action did not disapoint! From the start of practice, it look as if the battle would be between Pull magazine cover-boy - Supercross' NAG #1 of Riley House, and the former No.1 Amateur of Jesse Welch (for Throdwn). But you never want to count out the other contenders - such as Alpha's Bryant White or those gnarly Elliott boys for NorCal/NextGen.

The only thing that was for-sure, was that you did NOT want to miss this main!

With 24 riders in 13x, it would really come down to just two guys for the victory. Normally, your current No.1 Amateur in USA BMX - Ronnie Kim, would be seen as The Unbeatable One, but not this weekend. In the undisputed best race of the entire weekend, the BMX Shark's Cedric "The Entertainer" Cade did what many thought was impossible. And then, he did the unthinkable. But, living up to his nickname, it sure was entertaining!

In Saturday's main, Cedric closed in on Ronnie Kim down the second straight and saw daylight as they carved into turn two. Cedric took the low line, and came up into the big Box boy upon exiting, shutting down Ronnie in the process (or, so he thought). Thru the rhythm, Cedric pulled away from Ronnie even more, and had a solid 3-bike length lead as they came out of the last turn.
But Ronnie doesn't give up that easy; which explains that big white No.1 on a black background on his Box numberplate. Kim kept charging as our man Cedric did his best to hold him off. Through the last turn, the crowd was on their feet and announcer Grindle was going bonkers. Right at about the same time that Erick was exclaming "It can be done!" ... Ronnie proved it couldn't. 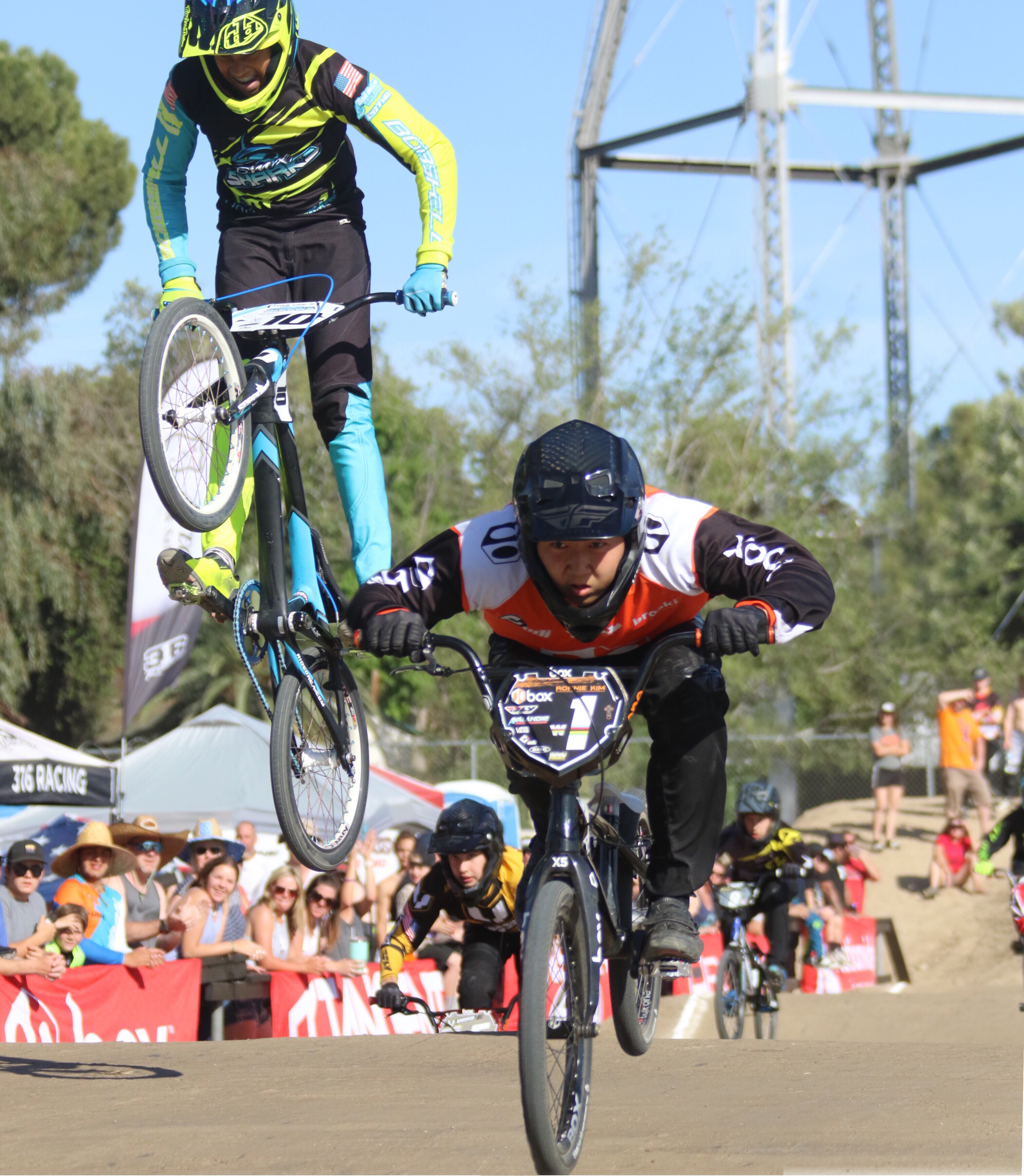 * photo above by Morris Images

Over the last jump, Cedric decided to sky it out, while Ronnie srubbed it and laid down his power. BLAM! As you can see above, Cade gave the win away - getting passed over the tabletop in what was no doubt the wildest main of the day. ....and perhaps, one of the best races so far this year!