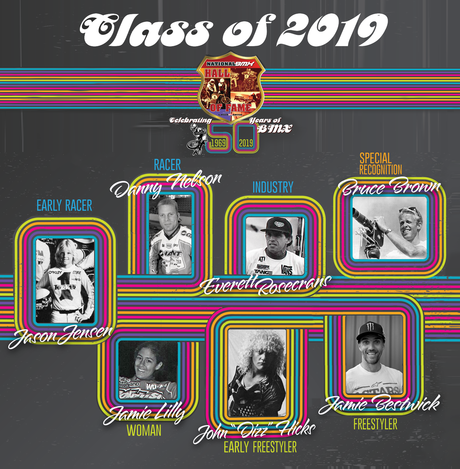 The entire BMX World is super excited for the 2019 Hall of Fame Ceremony, which will once again take place in Chula Vista, California - at the Elite Athlete Training Center, on Saturday night - October 5th.

Your 2019 Inductee for EARLY BMX RACER is … JASON JENSEN

Known by many as Juicy Jaws, this Factory Torker legend was a BMX idol in the younger age classes during the early 80’s.

Your Inductee for BMX RACER is … DANNY NELSON

The 2019 Inductee for BMX INDUSTRY is …   EVERETT ROSECRANS

Hired by Vans shoes as their Skate and BMX team manager in 1978, the “Vans Man” was vital in helping grow the shoe brand over the next three decades, helping numerous Pros, BMX riders and teams in all disciplines

Our WOMAN BMXER Inductee will be …JAMIE LILLY

Jamie Lilly is from the original ABA Pro Women class - formed in 1998, and is a 2-time ABA Number One Pro.

The 2019 Inductee for EARLY FREESTYLER is …JOHN "Dizz" HICKS

One of the most colorful freestyle characters from the 80’s, Dizz rocked the show circuit for CW Racing for half a decade - and still to this day, is the undisputed King of the Wedge ramp.

Your 2019 Inductee for FREESTYLER is … JAMIE BESTWICK

The British import has had a long and illustrious freestyle career. With fourteen X-Games gold dangling around his neck, he is tied with Dave Mirra in the medal count. At 48 years young, Jamie Bestwick still remains a podium favorite and gold medal threat in BMX Vert.

Also, this year, to help celebrate the 50th Anniversary of Bicycle Motocross, the National BMX Hall of Fame will be adding a Special Recognition Inductee…  BRUCE BROWN

The late, great Documentary filmmaker BRUCE BROWN, director of ON ANY SUNDAY -  whose opening credits - filmed in 1970, helped spark national interest in the great sport of BMX.

There you have it - congratulations to: 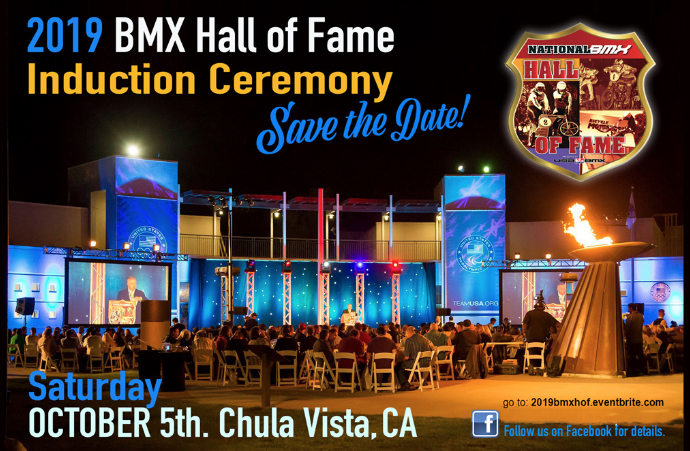 We invite you to join us on Saturday night - October 5th, for the 2019 Hall of Fame Ceremony - held in Chula Vista, California at the Elite Athlete Training Center.

Tickets are on sale now - at EventBrite.com.
Save $25 with early-bird pricing, for a limited time only.  We hope to see you there!