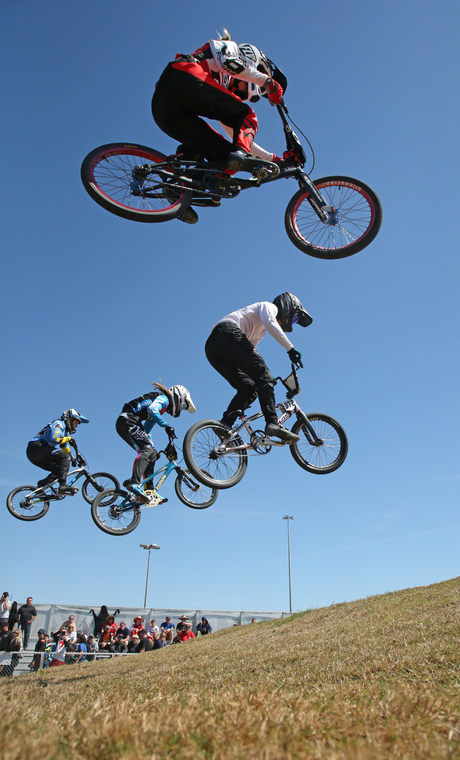 For the American Ams = Worlds Qualification.
For the pros and International racers = Worlds Preparation.

For those who hadn't been to Houston's Rockstar Energy Bike Park before, they were in for a treat! This 23-million dollar facility has something for everyone who loves riding a bike. They place is like a candy store for the BMX-loving kid in all of us. 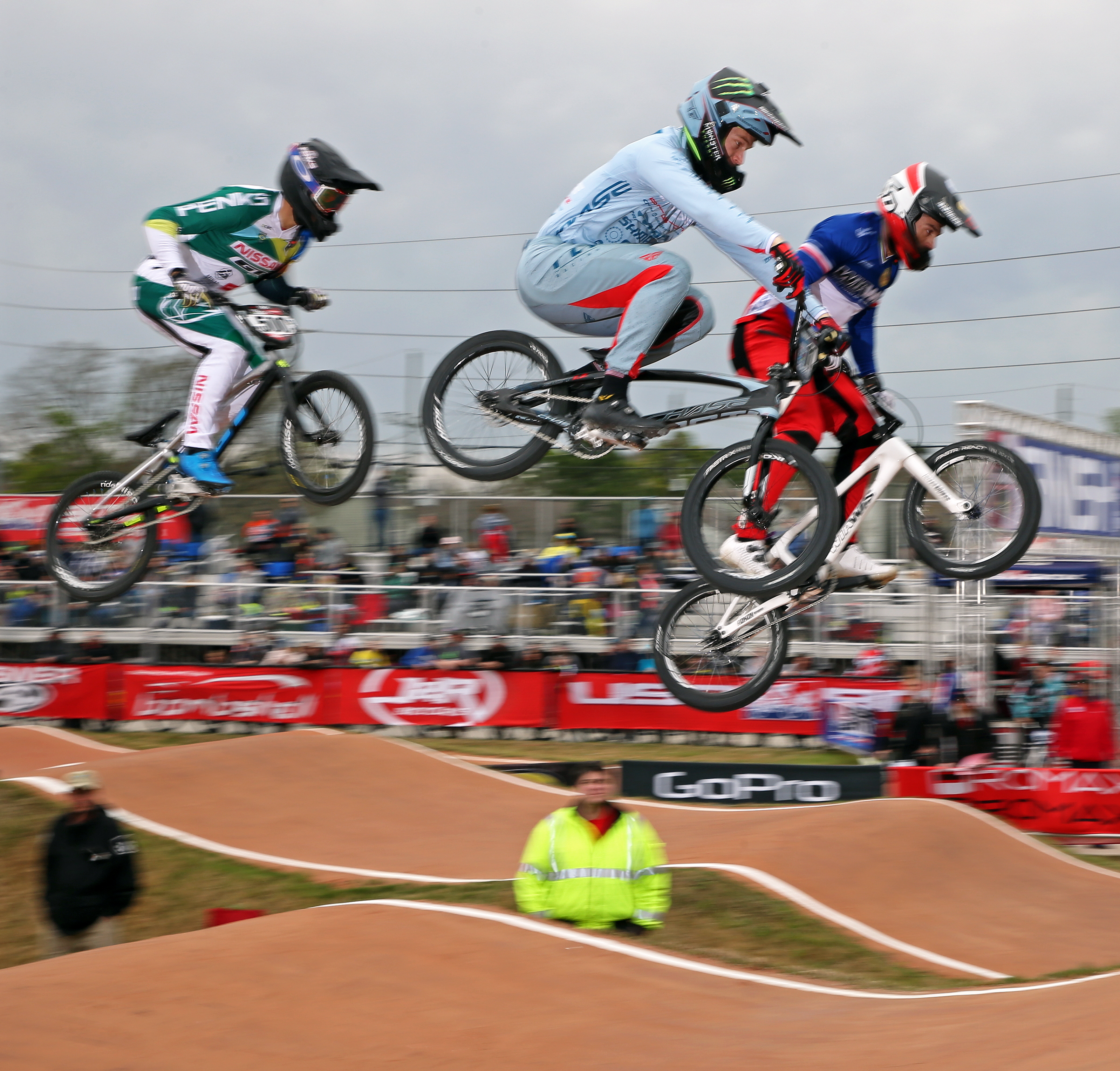 We started the weekend off in conjunction with USA Cycling where the best in the U.S. battled it out for the Stars and Stripes sleeve.

In Elite Women, the reigning USA BMX No.1 Woman Pro and Olympic silver medalist, Alise Willoughby (Saint Cloud, Minn.), did not lose a lap all day and was able to add another national championship title to her name. That’s nine national championship wins for Willoughby in the past 10 years. Last year’s winner, Felicia Stancil (Indianapolis, Ind.) finished second place overall. Brooke Crain (Visalia, Calif.) had two close third places, and tried to move up in the last round with a second, giving her third overall.

During the Elite Men’s race, Olympic gold medalist Connor Fields (Las Vegas, Nev.) was on fire, and also didn't lose a single lap. That’s now four national championship wins for Fields, as he regained the reed, white and blue sleeve for his Chase jersey.
The rest of the race was constantly changing with passes in every turn. When it came down to the finish line, Jeremy Smith (Dayton, Ohio) was in a solid second place, followed by Zack Van Kammen (Lake Elsinore, Calif.) in third.

What this means for Alise and Connor, are a guarantee to make the U.S. Olympic team - as if that wasn't already a "given" coming into this race. But now with the patriotic sleeves on their right arms, they might as well book their ticket to Tokyo right now - and then cross their fingers that the Olympics doesn't get canceled due to the Corona virus scare. 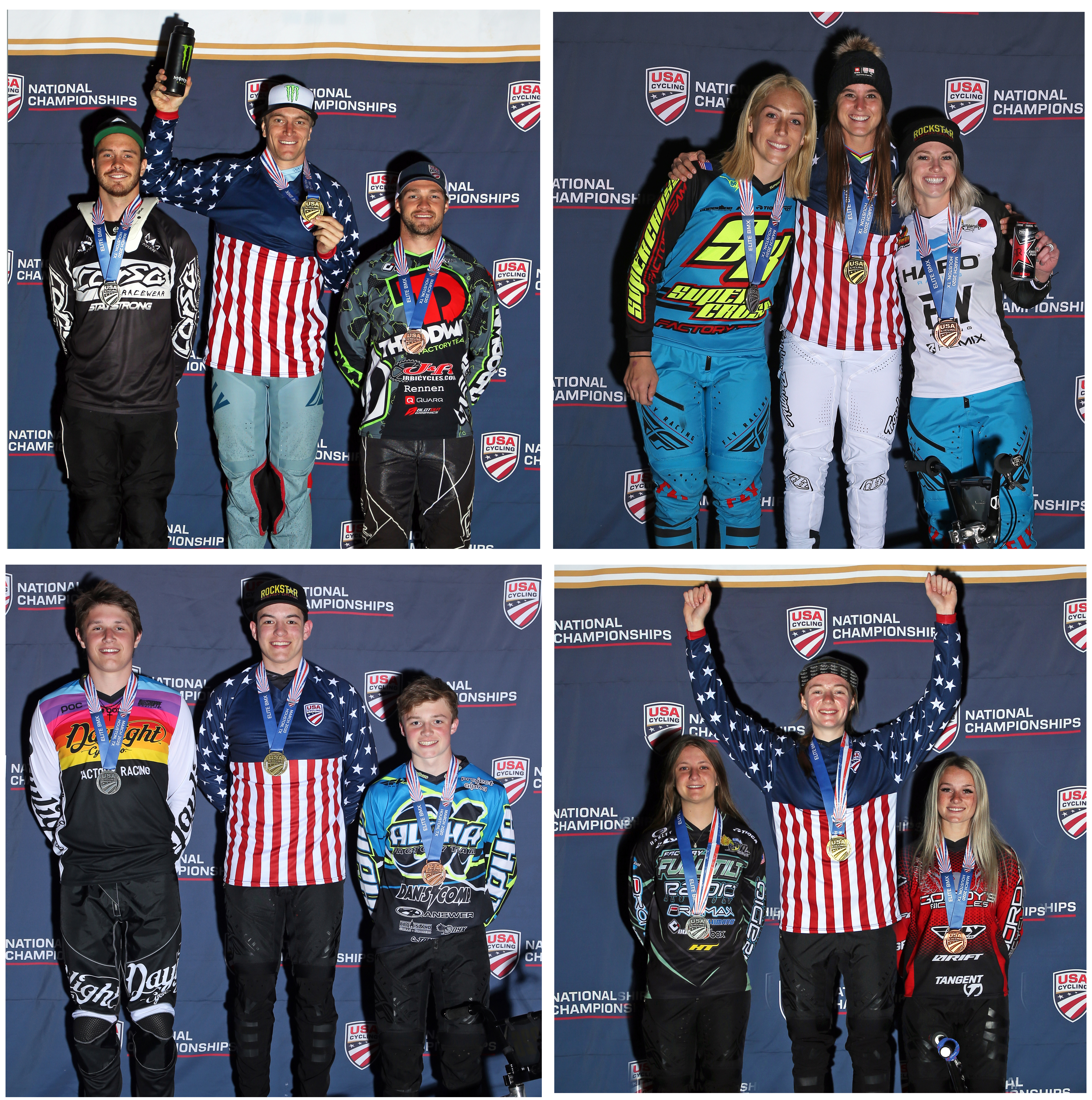 The Junior Women hit the 8-meter supercross hill in style, and Mongoose's Payton Ridenour (Pottstown, Penn.) and Full Tilt'er McKenzie Gayheart (Fort White, Fla.) were back and forth throughout all three rounds. Ultimately, Ridenour would come out on top, with Gayheart finishing in second. Gordy's Lexis Colby (Phoenix, Ariz.) rounded out the podium in third.

During the Elite Junior Men’s race, Tangent-Rift's Nick Adams (Orangevale, Calif) came out strong out of the gate, but Zach Jacobs (Mt Juliet, Tenn.) was hot on his tail and sprinted to the finish trying to overtake Adams at the line. It was close, but not quite - as Jacobs finished second. Alpha-male Brayden Kempel (Ramsey, Minn.) ran it in for third with a close push at the line.

For Adams and Ridenour, they both get bumped up to contention to compete in the limited Junior Elite class for Team USA at this year's Worlds in Houston. USA Cycling is still counting their best four finishes to decide the Jr. reps. 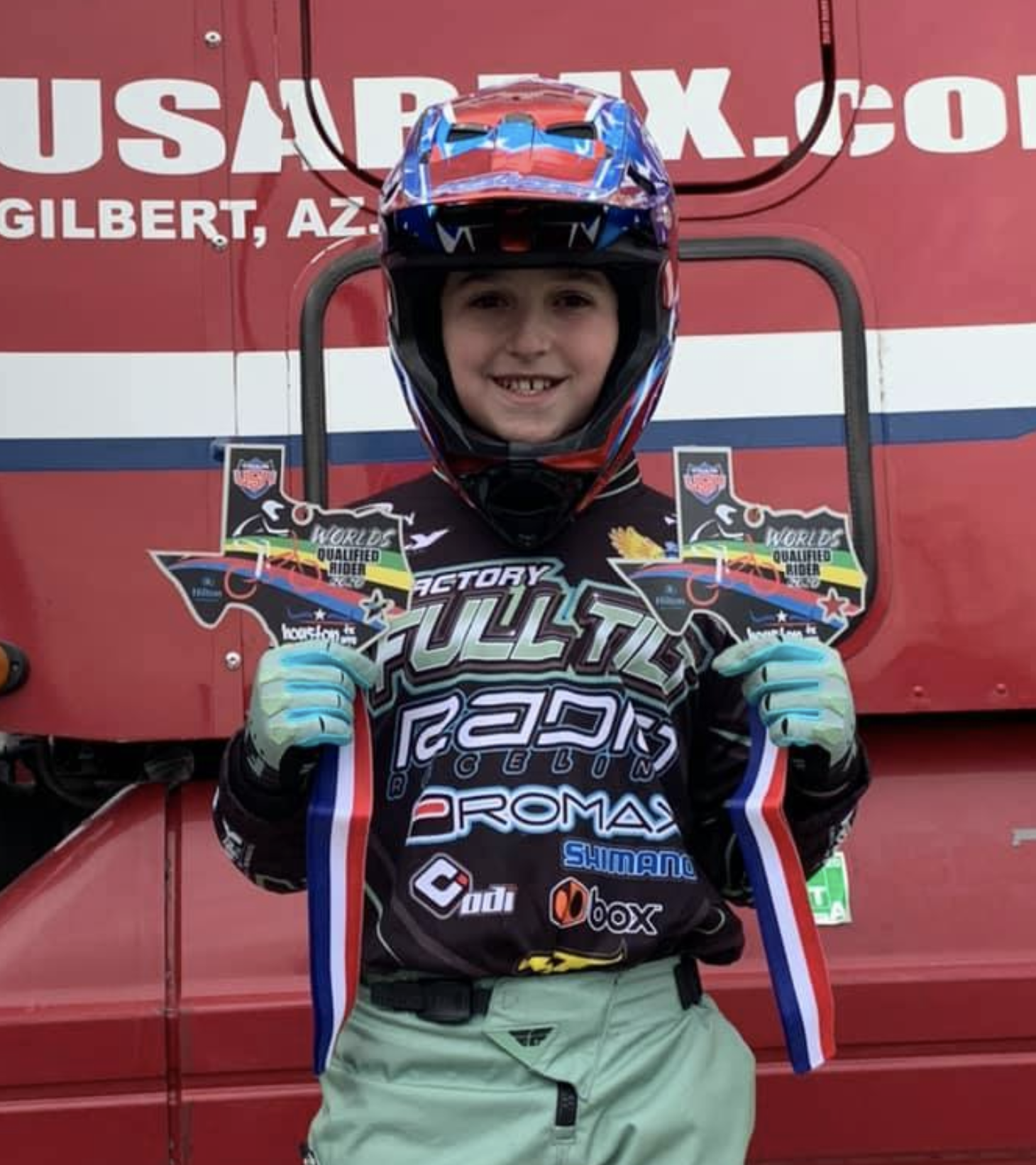 Meanwhile, on Friday night, a ton of kids quaified to become members of the amateur TEAM USA, earning the right to compete at this year's UCI World Championships. This was the second Worlds Qualifier (of 4), and being held on the actual Worlds track would be important; as a good sign of things to come this May. If you qualify for the Worlds, you'd receive this big Qualifier medal in the shape of Texas. In typical Texas-fashion, DeSoto TO and national announcer Chris Allen suggested making a belt buckle out of it. ...just be sure to file down those sharp edges!

Listening to a lot of the riders in the pits, they told us a key factor to making the Worlds main and getting a shot at the illustrious W#1 title, will be jumping the Rockstar's big triple into turn one. Many of the older riders noted that they weren't going for it this weekend, but admitted they'll have to step things up this May. 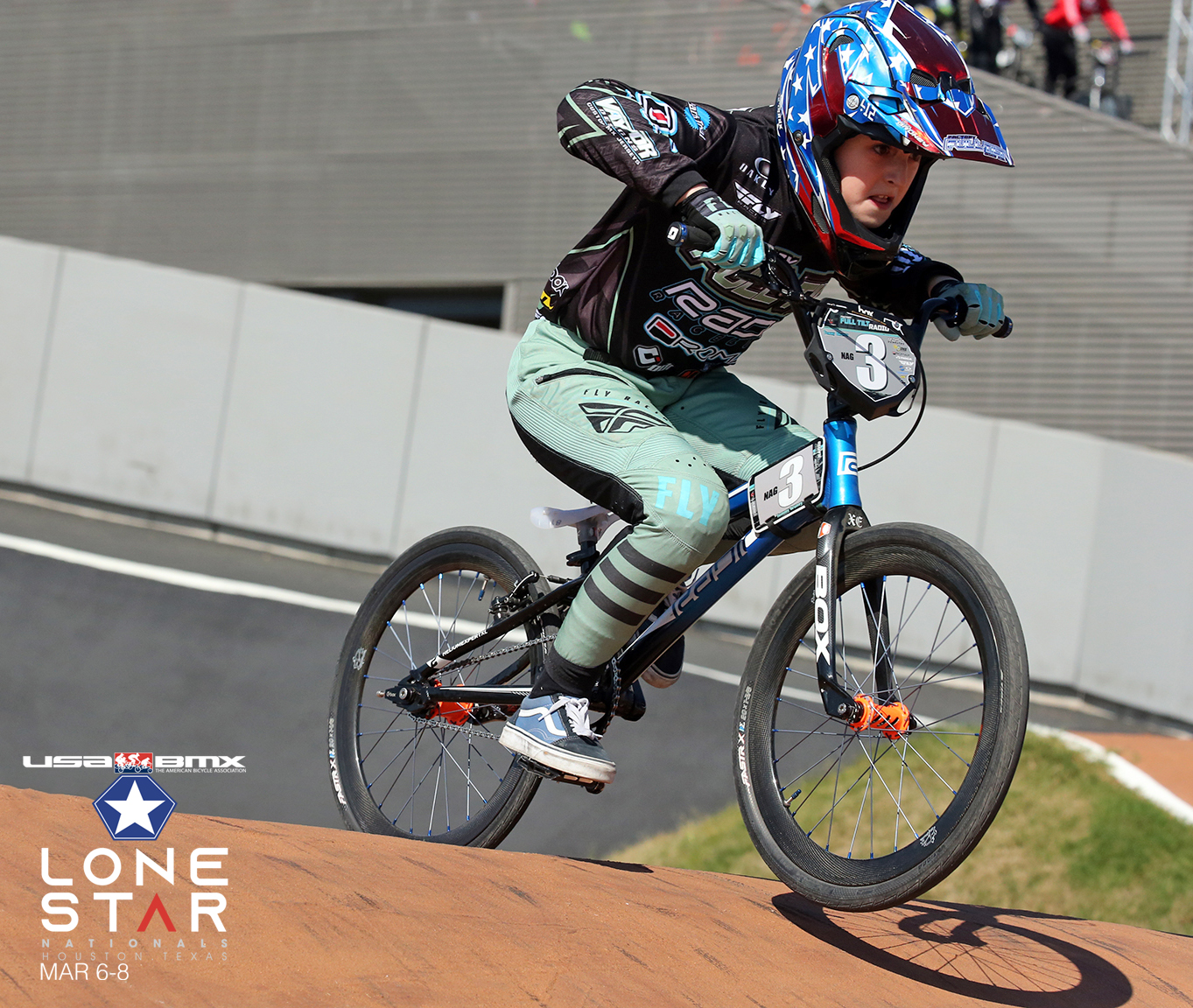 ...and, of course, its always cool to see ALL of the 12 & under riders racing on platform pedals, and most of them wearing Vans, to prepare for the UCI Worlds (where it is required).

Since Friday's pro action was for Americans-only, Saturday saw the International riders signing up to get prepped for the upcoming Worlds. Surprisingly, France and Japan were the main two countries to send out their heavy-hitters and get some pre-Worlds track time. Where were the Dutchies and Brits?!

Saturday's Elite Men saw their numbers grow to 25 riders, dueling for the $10,000 purse, with 3,000 bucks going to first place. Once things were whittled down to the great eight, it was a full-on International finale' - with two Americans (Fields and Wood), two Frenchies (Andre and Mahieu), two Brazilians (Souza and Rezende), one Equadorian (Campo) and one Aussie (A-Dean). At least six of these eight are practically guaranteed a ticket to Tokyo, to represent their home country at this year's Olympics.

Surprisingly, Fields blew his gate and was shut down quickly - and he decided to play it safe, shut it down early and watched the main go down from the back of the pack. What he and everybody witnessed was France's Romain Mahieu

In the end, The Beast continued to rule the roost - and was joined on the podium by Stancil and Saya Sakakibara. 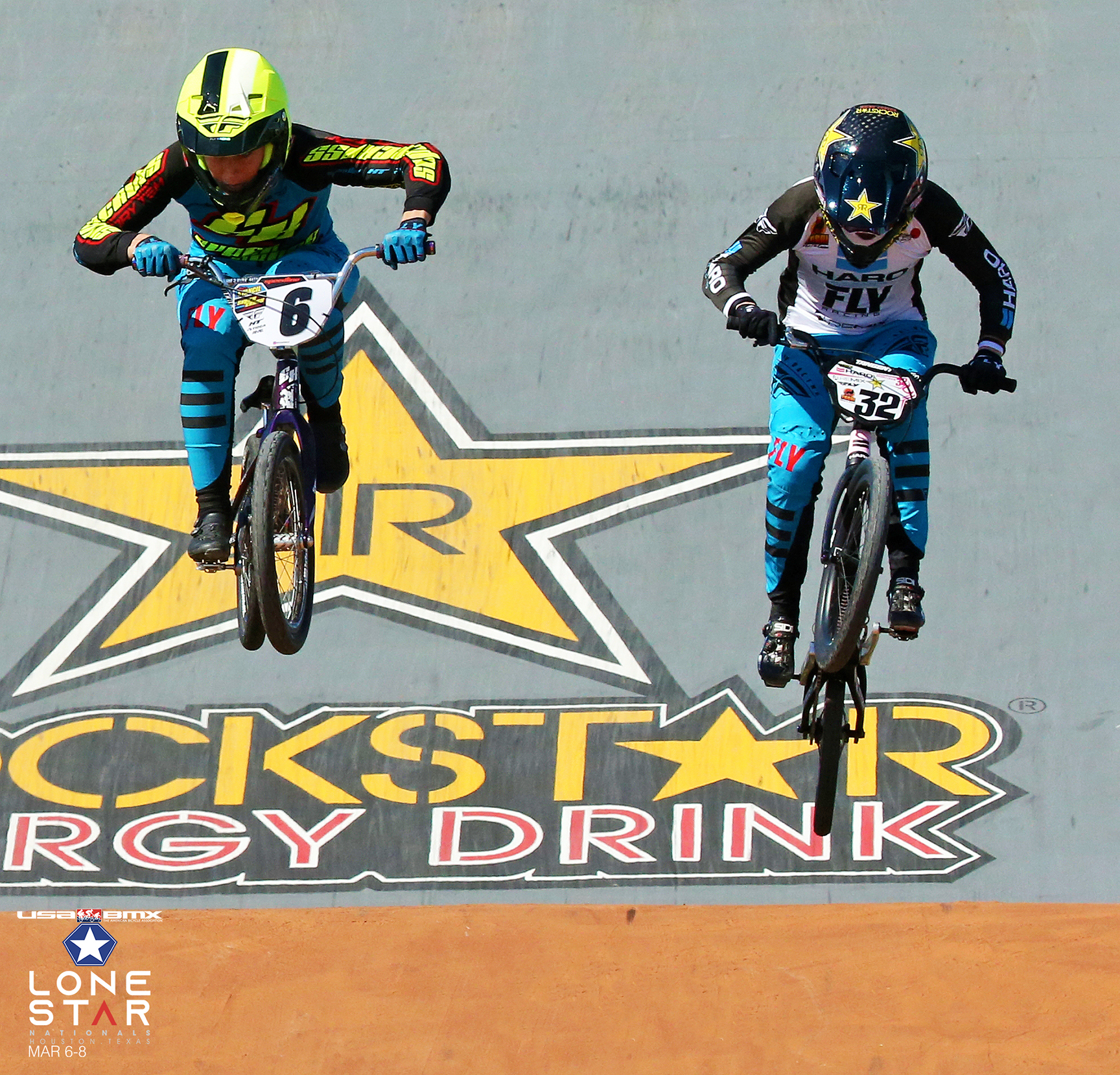 After last year's Grands controversy in the third main title-chase, Alpha's Jonathan Suarez is on a mission in 2020. So far this year, The Mosquito has put the bite on the Vet class, and continued his winning ways in Houston. With wins both days, that's six wins out of six tries - and gives the Alpha-male a solid points lead for this year's No.1 Vet plate. 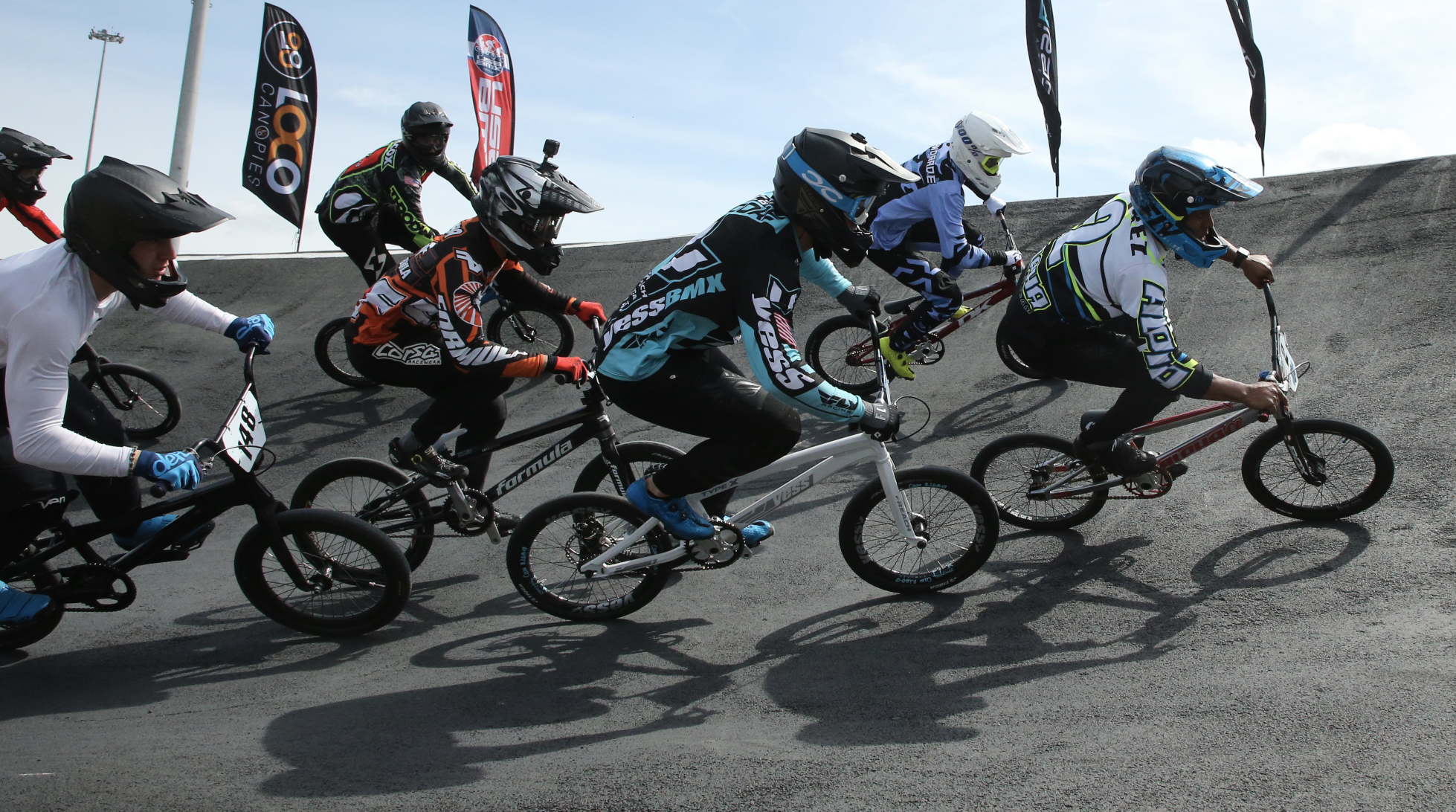 AMATUER ACTION FROM THE VIP TURN

You can't help but be impressed at the incredible millions-o'-dollars Rockstar Energy bike park. Thanks to the full support from Houston Sports and the city of Houston, nothing has been skimped on when it comes to this venue and this race. When the World comes to Texas this May, they are in for a treat.

Just check out the view from the second turn's VIP section: 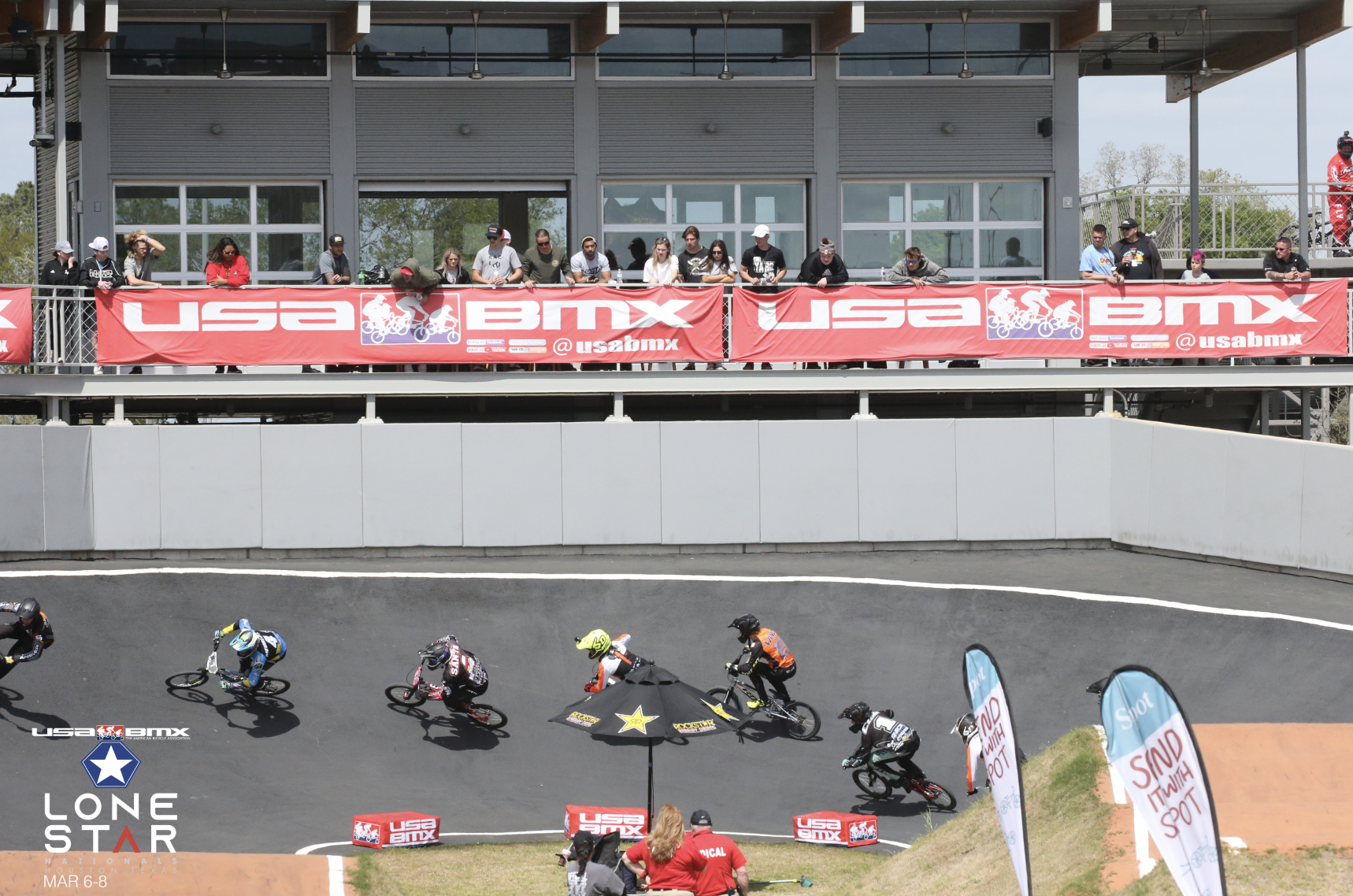 For Saturday and Sunday's mains, the excitement had built up to its peak, and the riders were amped up for the finals ...partly due to the endless supply of free Rockstar drinks near staging.

Among the standout races, of course, is 17-20x. With 25 riders on Saturday, everyone as anxious to see who'd come out on top - and bump themselves in the Amateur point standings. 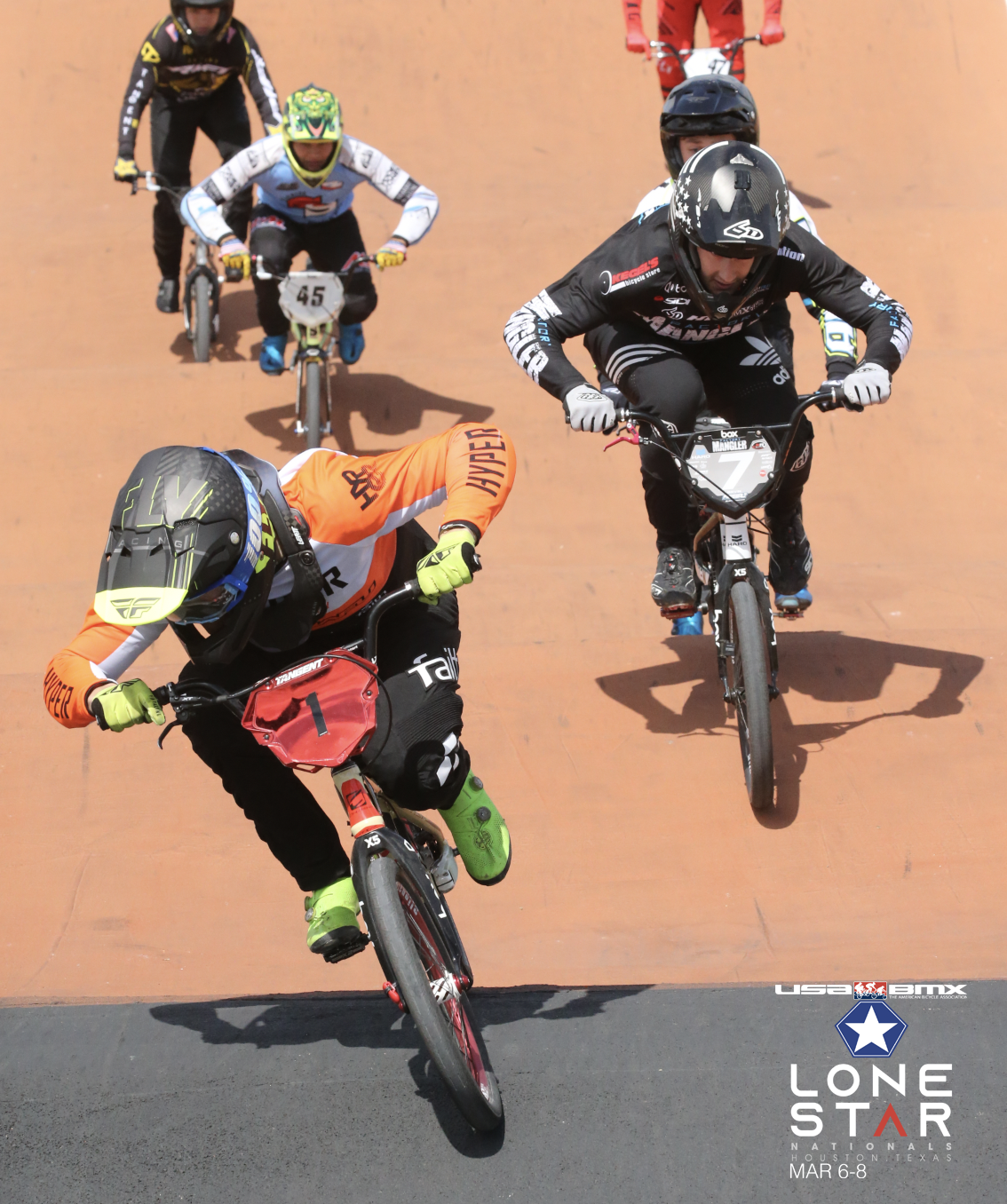 On Sunday though, Affoo got caught up in a top-tube tango during semi's, while blasting down the first straight. The Aussie's day was done, and that left Day Two's 17-20x final all up for grabs. Since there wasn't any Junior Elite racing on the big hill, the class had jumped up to 32 riders total - making it an important one for National points chasers.

Without Affoo in the final, it was all Hyper's Alex Antil, the Marian student, firing off his retro-rockets down the first straight. New Texan-transplant Gavin Freewalt was in hot pursuit, but couldn't catch Antil and his ROC#1 Chase-colored Hyper, and scored the 2-spot, ahead of this year's Junior sensation - Brayden Kempel.

THE RONNIE-CEDRIC SHOW ON THE ROAD

Ever since this time last year, one of the most exciting battles to watch has been the Ronnie Kim -vs- Cedric Cade showdown. While the majority of the time, Box's W#1 of Ronnie Kim will score the win, but you've gotta love the intensity of challenger Cedric the Entertainer.

In Houston, as P.T. Barnum would say, the show miust go on! And that it did. Cedric had his moments, dueling with the Factory Box superstar, but for the most part - Ronnie remained dominant. ...that is, until Sunday's 14x main. Kim blew his gate and found himself in a peculiar psoition - fourth place. Meanwhile, Cedric had the snap and never looked back. In the first turn, Ronnie got balled up with the mid-pack and wound up sampling the Rockstar asphalt. 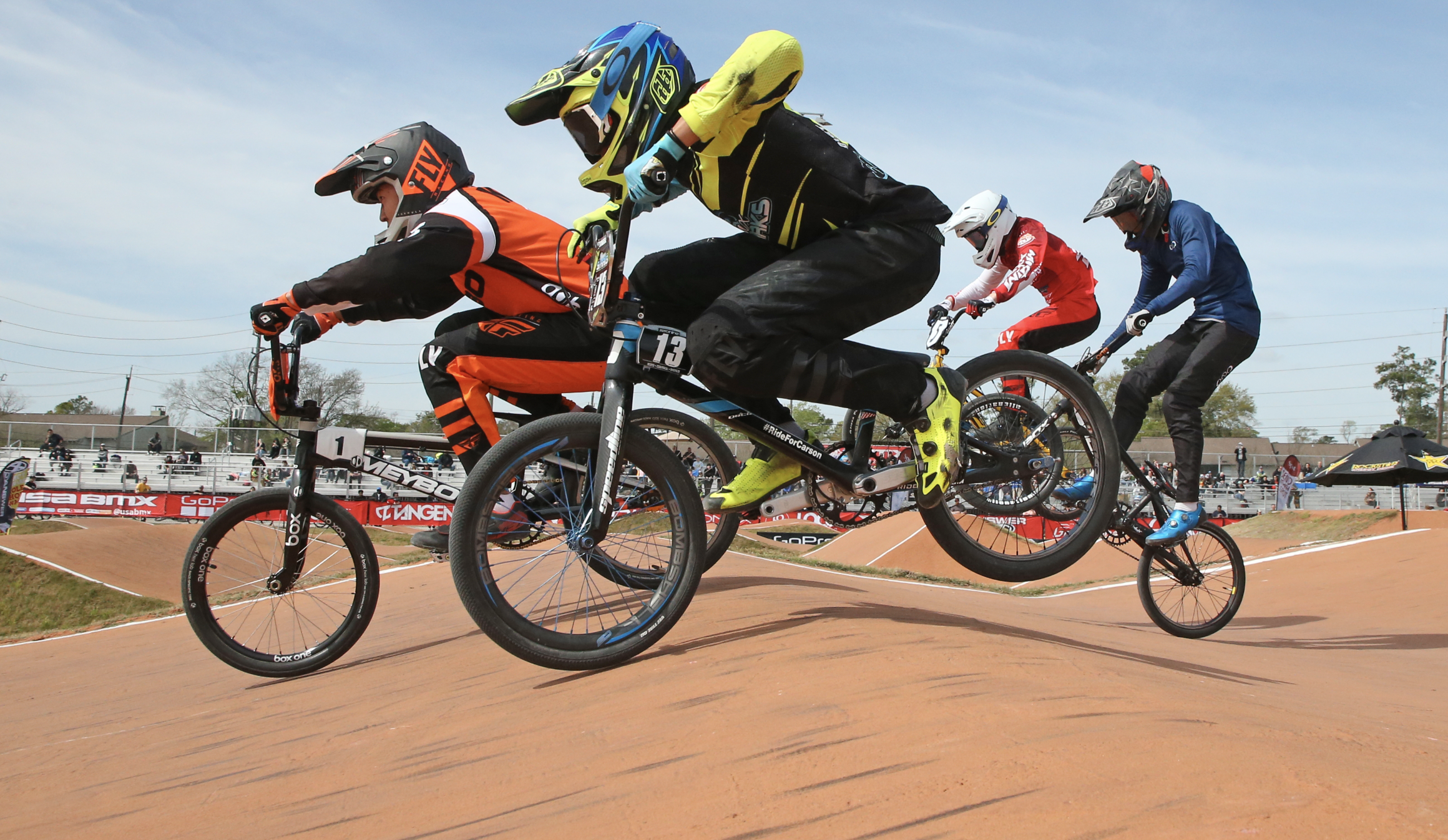 The Bay Area bunch brought out all of their big guns this weekend, including their fast South American secret weapons, as well as the notorious Shriver Sisters. On Saturday, Esja and Richelle had to race eachother in 15-16 girls, and they were battling out front all weekend. On Saturday, they went 1-2, with Esja scoring the first.

On Saturday in 17-20X Women, Olivia Armstrong came out on top, but Sunday was a whole 'nuther story for the fastest ladies in BMX. FullTilt actually scored a 1-2 punch, with Olivia's team mate Stephani Morin hot on her heels.

Sunday, it was still a Full Tilt win, but this time 'round it was Skittles - McKenzie Gayheart getting the big win. Most impressively was 2nd place finisher Jui Yabuta, from Japan - who came to Houston with a very fast contingent of Japanese riders, who all train under former AA-pro Masa Sampei. The Japanese riders are definitely improving, and Jui's 2nd place against America's finest, is proof that you don't want to count them out at this year's UCI Worlds. 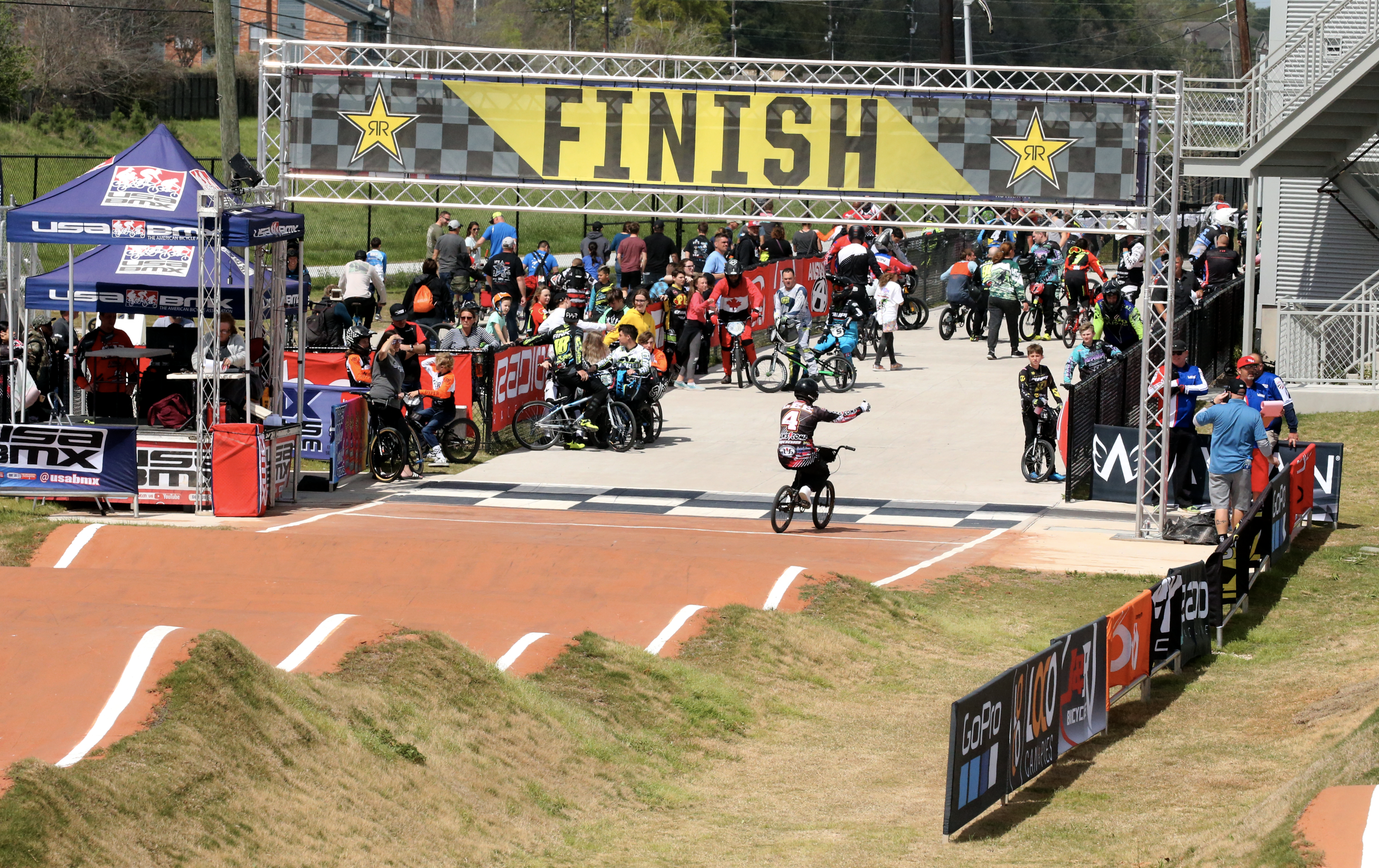 ...and just like the above photo shows, this race report is finished.