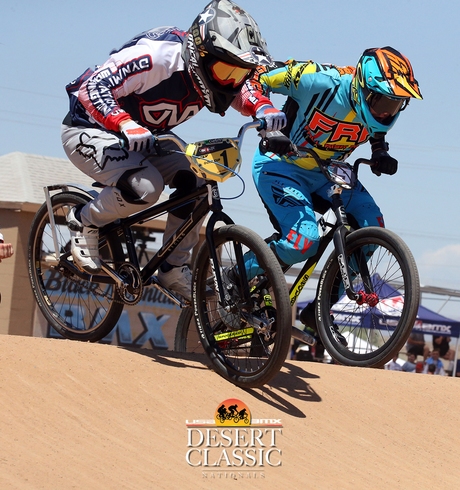 After months of lockdown and sheltering-in, the BMX world - along with most of America, is finally back on track. The second stop in the all-new 2020 National schedule brought us back to the home of the Winter Nationals - Black Mountain BMX, in Phoenix, Arizona!

Amidst all of the COVID craziness over the past few months, the USA BMX National circuit has been forced to look for new locations for their races, in States and cities that are open to having sporting events with large turnouts and plenty of spectators. With new rules and guidelines to follow, Arizona was a good option for re-hosting another big race - and Black Mountain BMX, who'd hosted the Winters back in February, was all up for doing it again. The biggest obstacle, however - wouldn't be an infectious easily-trasmitable virus. Instead, it's the first week of June in the Arizona desert. Temps in the 100 to 110 degree range could wind up being as challenging as the rhythm section. 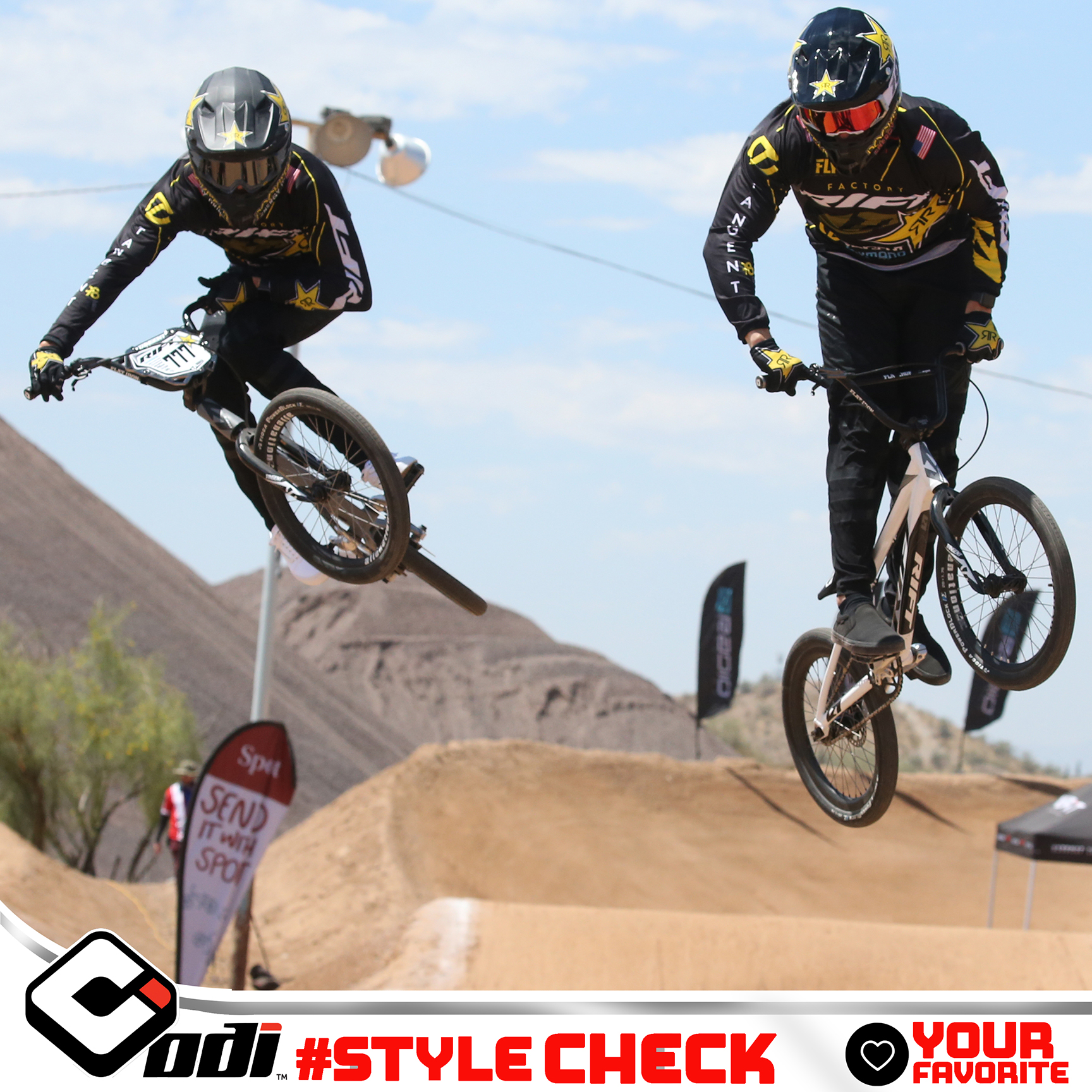 The Ams weren't the only ones ready to get #backonTrack after all of this crazy Covid crisis. Phoenix saw a great turnout of Pros, including AA superstars like Nic Long (Hyper), Corben Sharrah (Daylight) and Tangent-Rift's Corey Reid. New Rooke pro sensation Riley House was ready to take on the big guns, and everybody was left wondering - where the heck was Cam Wood?!

On Friday, it was Tangent's Rookie - the reigning National No.1 Amateur from last year, holding off Long and Peebles to score the big victory.

This weekend, for the first time ever, USA BMX debut'ed the Womens Pro Open class - and the first-time turnout was impressive. Arizona is home to a whole lotta fast chicks - so it was easy to make up a class at the #DesertClassicNats. Full Tilt-Radio's Ashley Verhagen and DK-316's Daleny Vaughn would end up duking it all all three days to split uo the wins.

Originally, all of the men pros had discussed the idea of having a flat-pedal Sunday, but they just couldn't wait that long. A gentlemen's agreement was made by all, to run platform pedals on Saturday - leaving some of the guys scrambling over to tangent Pro Shop to buy some pedals or shoes. It was interesting to see the variety of shoe/pedal combinations being used, and it did seem to make the racing more fun - with an occasional foot-off turn manuever being seen. 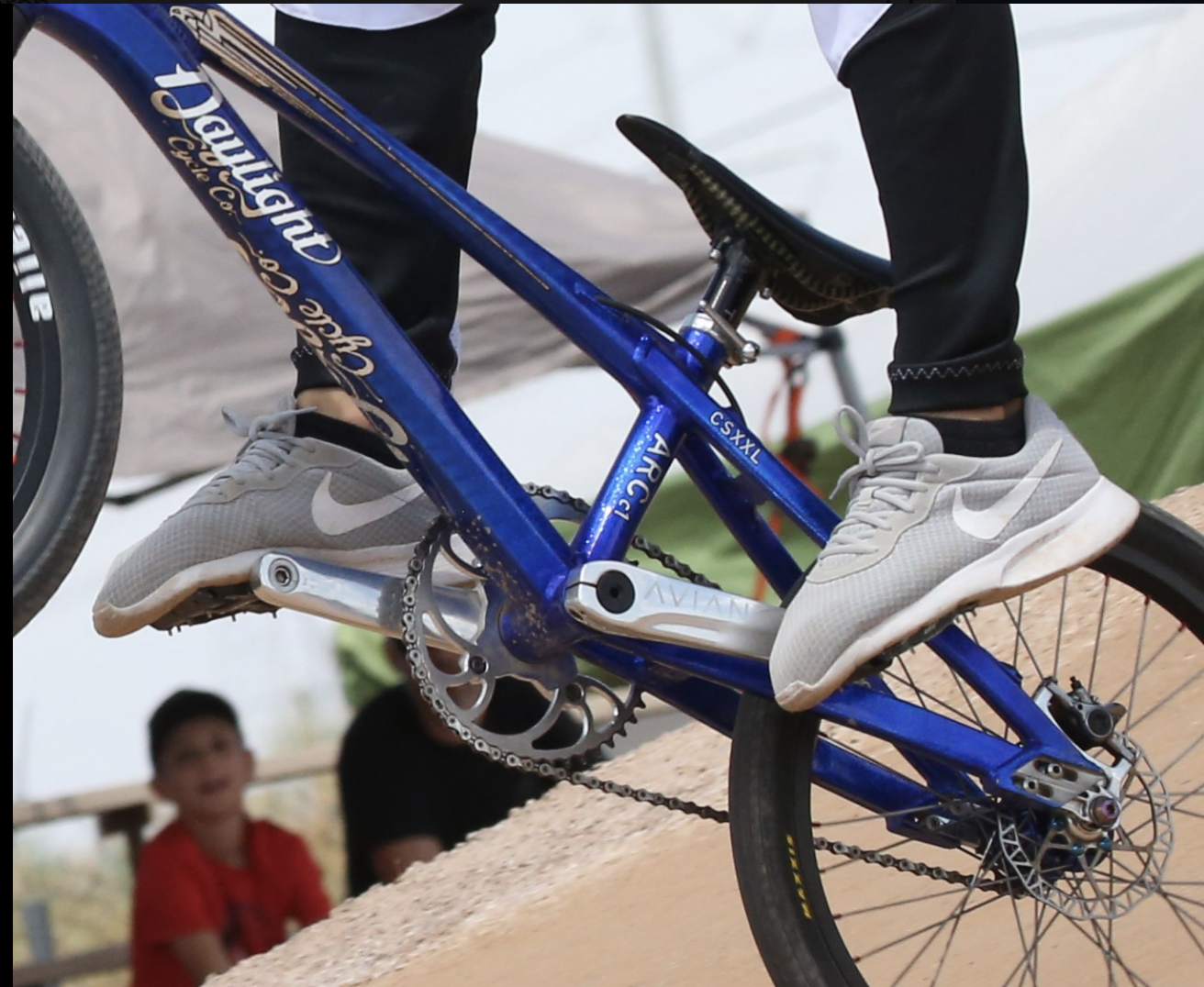 Right before the main, Nic Long was overheard teasing Corben Sharrah, saying "Corben! Are you going to a track meet after the races?" - referring to the Daylight rider's choice of Nike's he had on.
Corben just grinned and responded by smokin' them all from Lane 8.

In that final, Corey Reed took an un-memorable digger in the third turn. He bongo'ed his head hard, but eventually walked to the medic tent on his own - despite not know where the heck he was going. Reed would be pulled for the weekend with the concussion protocol, and we wish him a speedy receovery.

Hyper's Nic Long was seen doing double-duty, as he had a special documentary film crew following him around all weekend - putting together a pilot for a proposed BMX show. if there's any personality in BMX who would be entertaining for a TV series. it'd be Nic!

Whether it was a moto or main, Full Tilt-Radio superstar Cole Frederick was ON FIRE! For a 12x, the Kid looks more like a 15 or 16x, and he looks t obe in a class all by himself. By the first jump, he'd have a 1 or 2 bike-length lead - every time. Then, after pullin' his comp even more around the track, Cole usually finished with a entire last-straight lead (keep in mind, Black Mountain's last straight is a pretty short one - but it sounds good, don't it?). 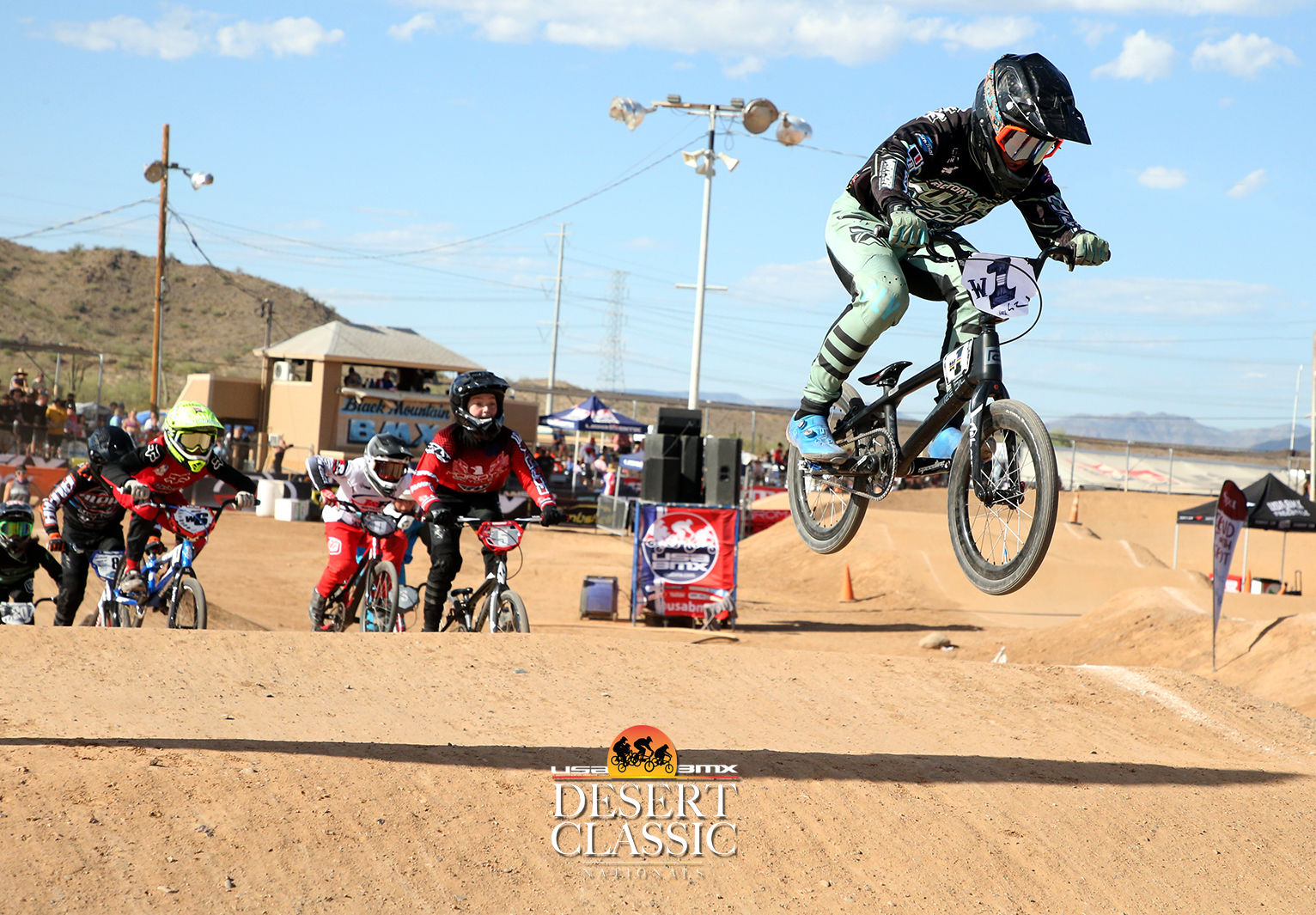 There is little doubt that a National No.1 Amateur title is in the future of the Minnesota madman, and if he sticks with the sport 'til his 20's, we can foresee a bright future as the sport's No.1 Pro - as well as plenty of World Championships and rainbow jerseys between now and then.
Cole already has the build, strength and skill of a Connor Fields and all of the work he does with Burlin at SuperCamp clinics, is molding him to become the next Bubba Harris.

On Saturday, it looked as if the FullTilter and his Radio bike would again, beat 'em like a rented mule. Cole again had an easy five or six bike length lead in the main and was blasting down the third straight, when suddenly, all by his lonesome, he took a hard digger. Just blew-up, all by himself. if it wasn't so hard of a crash, he might've been able to get back up and still win, but he splatted on the hardpacked Black Mountain track pretty good, and that handed seocnd placer Frankie Stubbs the lead. J&R's Ryder Santos was hot on his tail, and suddenly it was a race!

To say that Stubbs was stoked on the 12x win would be an under-statement!

We ran into Cole on Sunday and asked him what happened in that main. He blamed it all on the wind, which was blawin' prety strong during the mains. "I just caught a big gust, and it blew me away," Fredereick explained.

On Sunday, the wind-factor was at an all-time low by the time 12x's lined up in the gate, and Cole wasn't about to make the same mistake twice. Just like he did on Friday, he whupped up on his competition and crossed the finishline as everybody else was entering the last turn.

Take our word for it - Cole Frederick is the FUTURE. He could very well be the next Bubba Harris or Connor Fields. Bookmark this and come back to this in ten years, to see if our prediction is right. 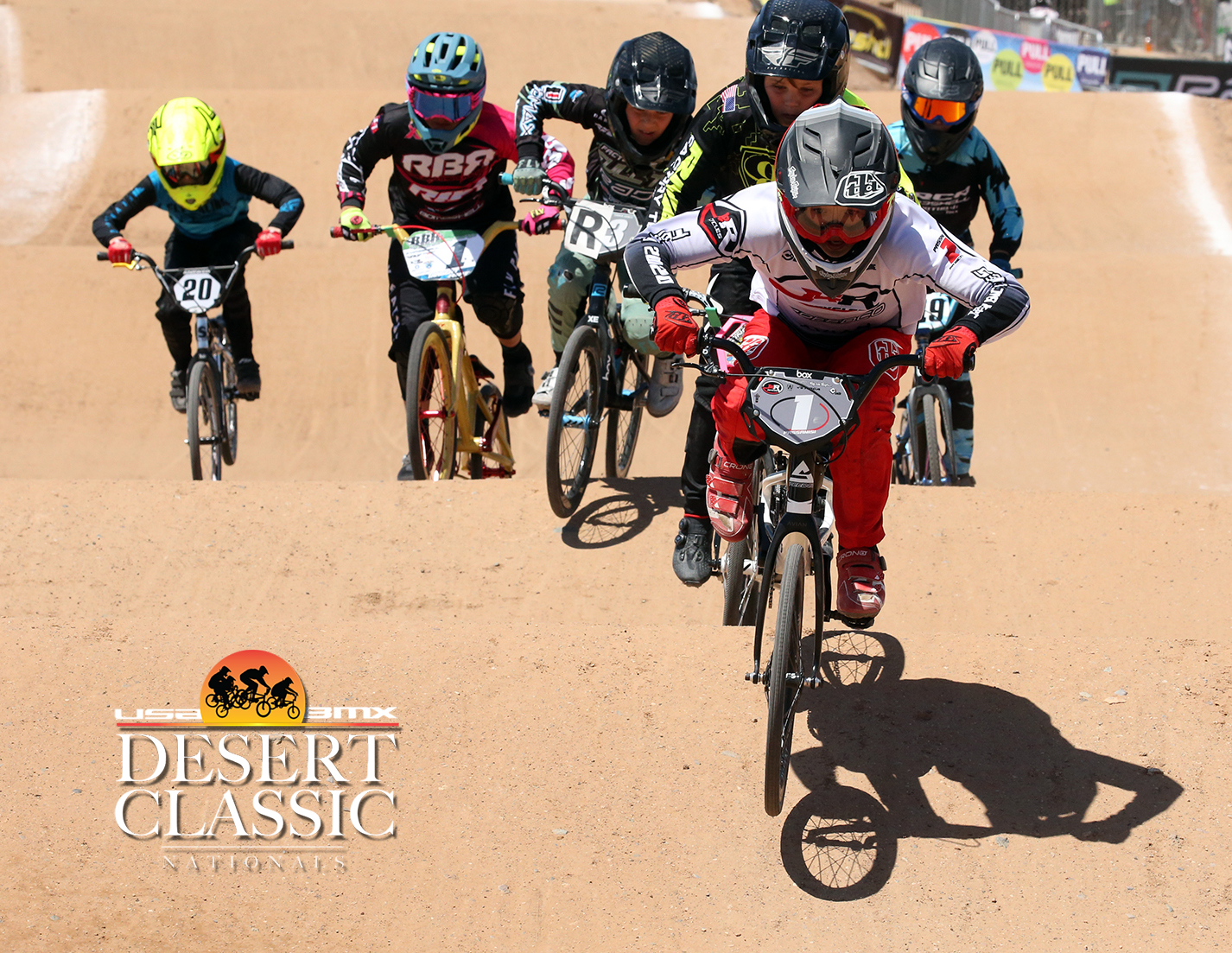 J&R's former No.1 Cruiser kid - Hayden Passanisi, was an other dominato all weekend long. He barely lost a race during all three days, whether it was in X-Open, cruiser or class. We'll have to double-check, but it's probable that "Passin'-ain't-Easy" doubled or tripled each day.

In the girls ranks, we witnessed some awesome racing, whether it was Box's Jemma Tollefson in 8girls ot Black Mountain's very own Hannah Leakey in 12girls, or all over and inbetween. But of them all, nobody does it with speed, style and confidence like Danica Anderson. The BMX prodigy continues to amaze us with her jumping skills, wether she's doubling-it-up over the triples with a quick lil' cross up or manualing thru the rhythm at Pro speeds, there really is no other girl who can ride like she can. 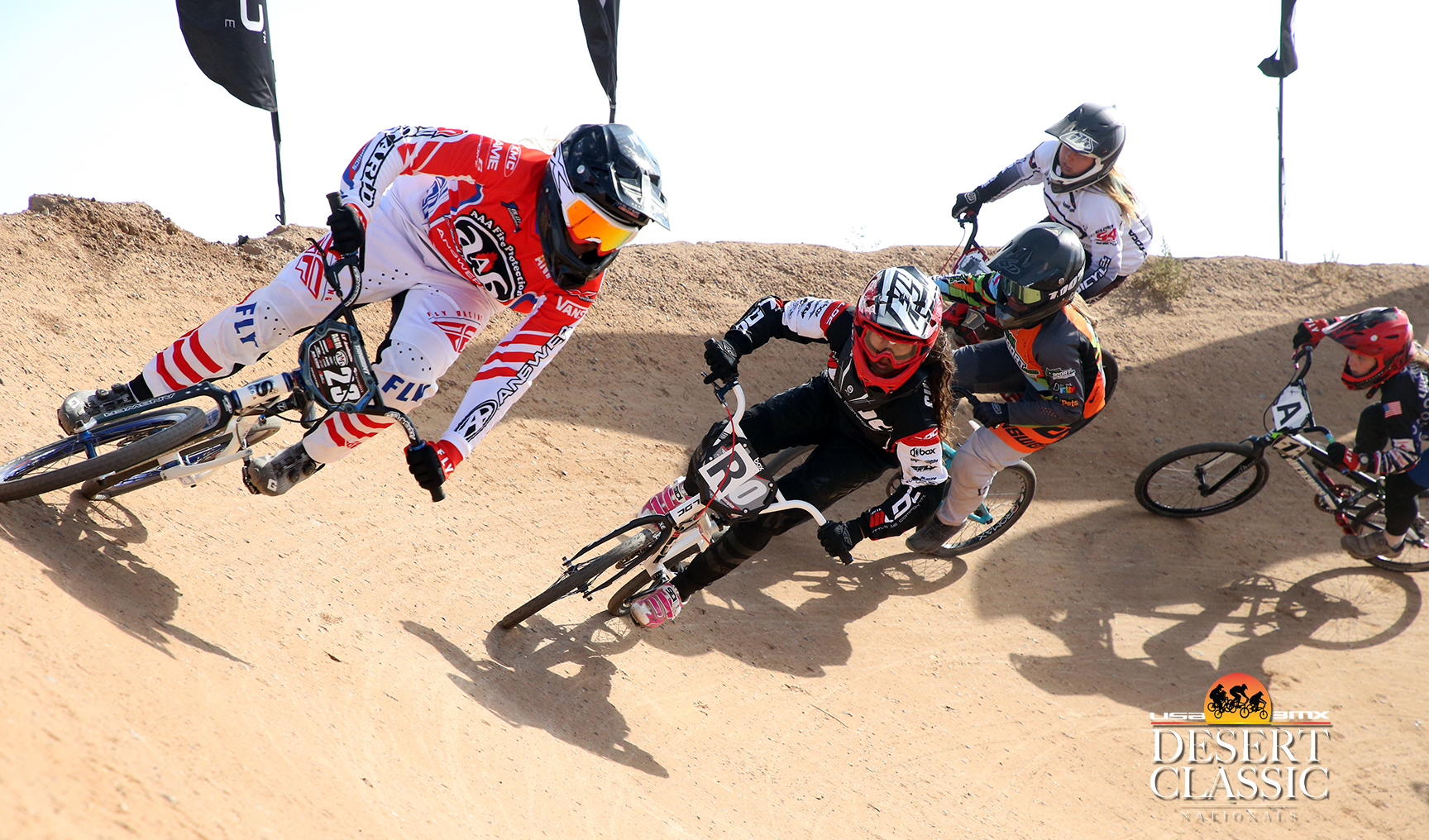 The Ronnie Kim -vs- Cedric Cade Show continued in Phoenix, and it was one you didn't want to miss! Showtimes were daily, in the 14x motos, semi's and main. 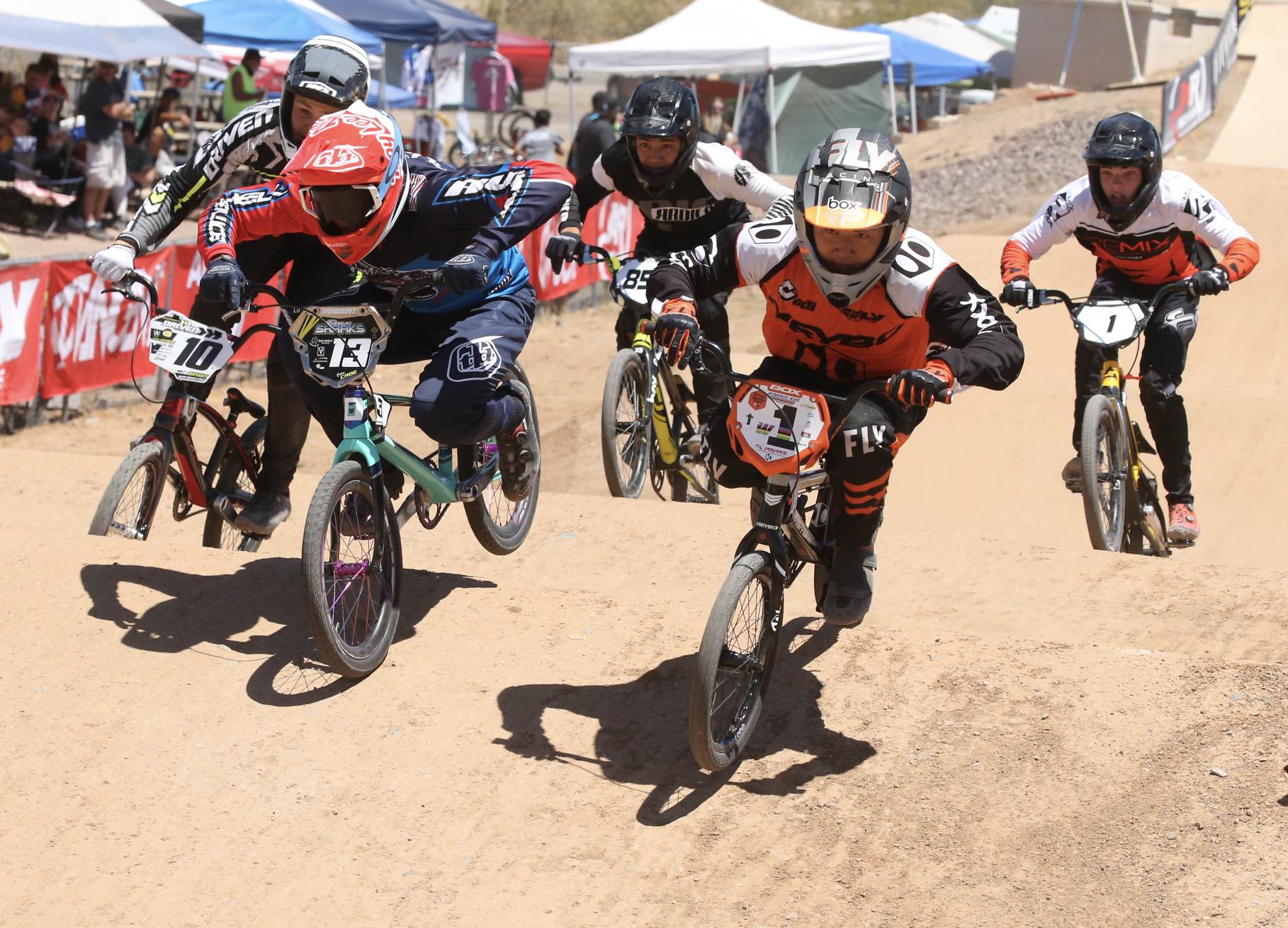 By the end of the weekend, the final tally was Cedric: 2, Ronnie: 1.

On Friday, The Entertainer was said to have moved over hard on Ronnie in the main, or that Ronnie just got the worst start of his life, but either way - the outcome was a huge 3-bike length lead by Cade as he entered the first turn. He was gettin' up and GONE on Friday - as Ronnie found himself stuck in third place, behind ReMix's Andrew Rassi, and was forced to play catch-up.

Cedric the Entertainer scored the win again on Saturday, snappin' hard on the entire 14x class from lane 8, as if he were Corben Sharrah. You could tell that Cedric's confidence meter was running at an all-time high, and that Ronnie was struggling to get his head back in the game. It's always a tough one when a rider as dominant over the past five-plus years, finally starts getting some competition - and has to battle from behind. But if you know Ronnie Kim, rest assured that ti won't be that way for very long. The dude has a reserve-pack of determination.

In Sunday's 14x semi, Ronnie and Decric were again lined up - for yet another awesome showdown. It is a semi, so you only need to take top-4 ... but Cedric, in his constant quest to get into Ronnie's head, carved a bit hard into turn one and slid out while in seconde place. Maybe Ced was trying live up to the grindle-theory - trying to show him a wheel, but he def didn't seal the deal. Now out of the main, Sunday's 14x main was all Ronnie Kim's, to win or lose.    ..and you get one guess at which one it'd be.

After three days in the desert, and national moto-count ranging from 160 to 170, racing was wrapped up a lil' after noon on Sunday, leaving everybody refreshed and ready for a nice drive home - already reminicsing about what a great time it was.

USA BMX's CXhris Luna wrapped it up nicely - "The weather was warm, but it was nice to have an event here in Phoenix with no worries about rain ...which also meant Mike Tradup wasn’t grouchy. Haha. Hats off to Debbie Keg up to Grindle'slley & the Black Mountain crew for getting things done in a short amount of time to make this event happen. The track was probably the best that I’ve seen it. Thank you Mikey and Beaudie, and everyone at Black Mountain, who help make the track surface like glass." 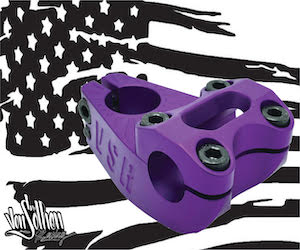 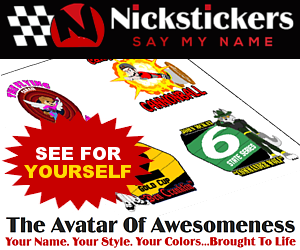