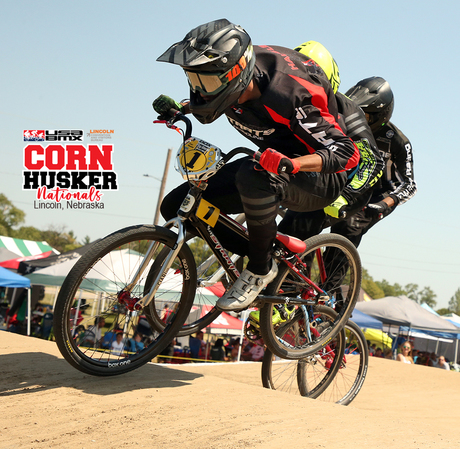 Star City BMX has hosted some big events in the past - from Nationals to Gold Cup Finals. One year, they'd even made the entire track white, with red stripes - classic Husker colors. This time 'round, the Staf City crew had the track completely dialed in. Jumps were pretty compact after the 100-ton roller smoothed everything out, but there were still some spots left to catch air if you'd like to.

Among those was the "Dean's Exit" decision maker, which was even equipped with a tiny Aligator-infested swimpool inflated between one of the doubles. Every once in awhile the wind would blow open the mouth of the gator and it'd snap at the tires as riders flew by. 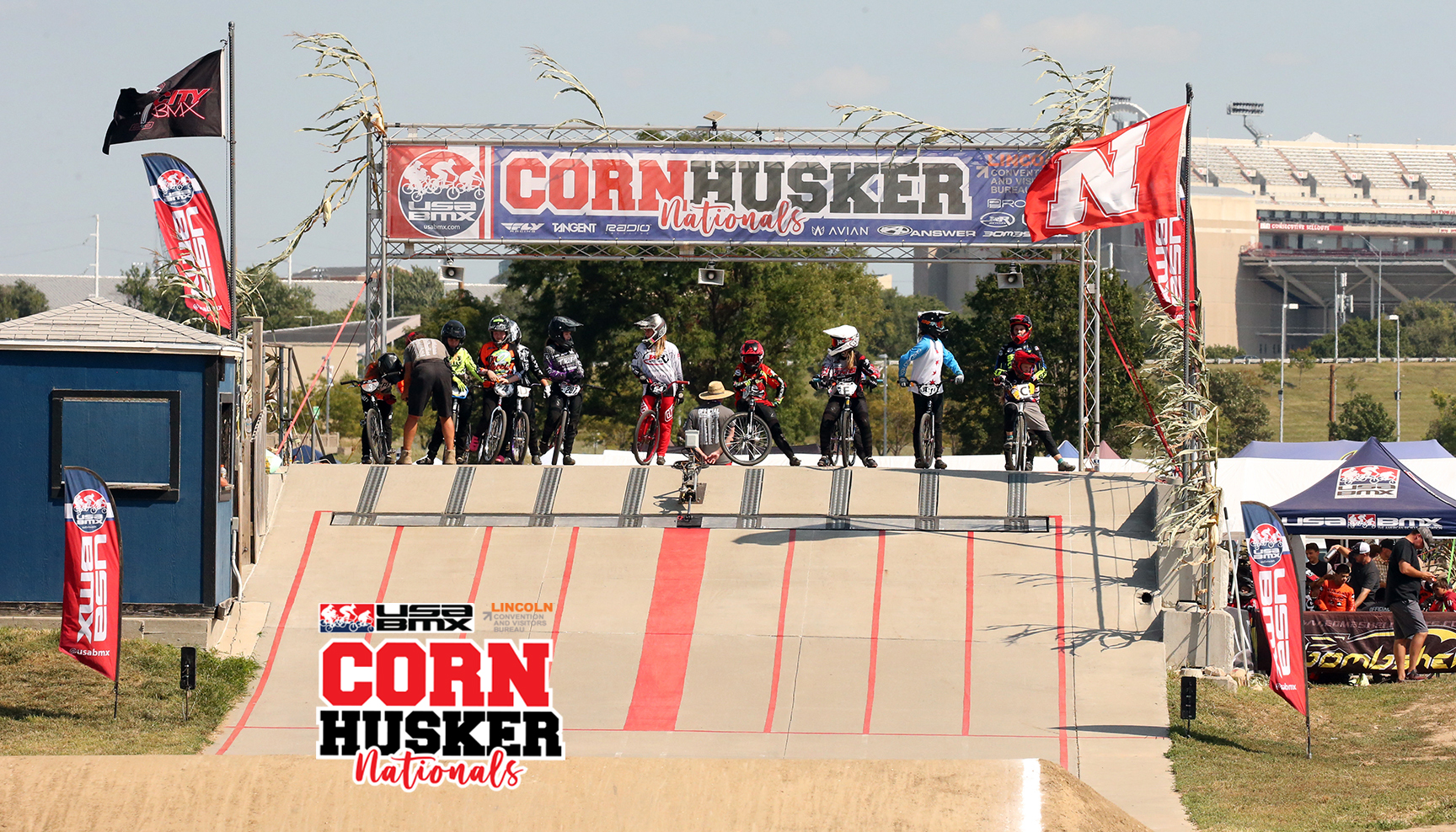 TO Josh Larson and his crew even decorated te sidelines and starting hill trussing with corn stalks, giving it a touch of Wizard of Oz (or Halloween). Also on the sidelines, past the finishline sat a spiffy new John Deere tractor, and behind the second turn was parked a sweet Humvee from the Nebraska National Guard. Along with the Lincoln Convention and Visitors Bureau, the entire City was stoked to host

To say Star City BMX went ALL out for this one, is an understatement.

NEBRASKA TRIVIA: Nebraska Has More Miles of River Than Any Other State.

When it comes to the hot-topic race action, we of course have to begin with the continuing saga of "The Assassin -vs- The Entertainer." Box's Ronnie Kim was in Nebraska, and so was The Shark's Cedric Cade; so we knew it'd be a great show in 14x. But seeing how this track was - mostly rollable and high-speed, every one knew that the World #1 of Ronnie would have the advantage coming in. Even if Ced skimmed the mellow Pro section, it wouldn't really give him much of an edge.

As predicted - Ronnie took the W's all three days, but that's not to say that Cedric was off his game. Ced was still holeshotting half of the time, and even led Sunday's main to the first turn. Ronnie was neck-to-neck with him and got just enough groove into the turn to squeeze Cedric to the inside and just took off like a rocket from there. Another lesson learned for Ced.

Talking about National titles - let's talk 17-20x! This is the class that traditionally has the rider-count to earn some a No.1 Am title, and we wouldn't be a bit surprised to see another #1 come out of here in 2020. The biggest question, tho - is, Who will it be?!

Could it be Alpha's Brayden Kempel?! After watching his main in Nebraska; some might say Yes. 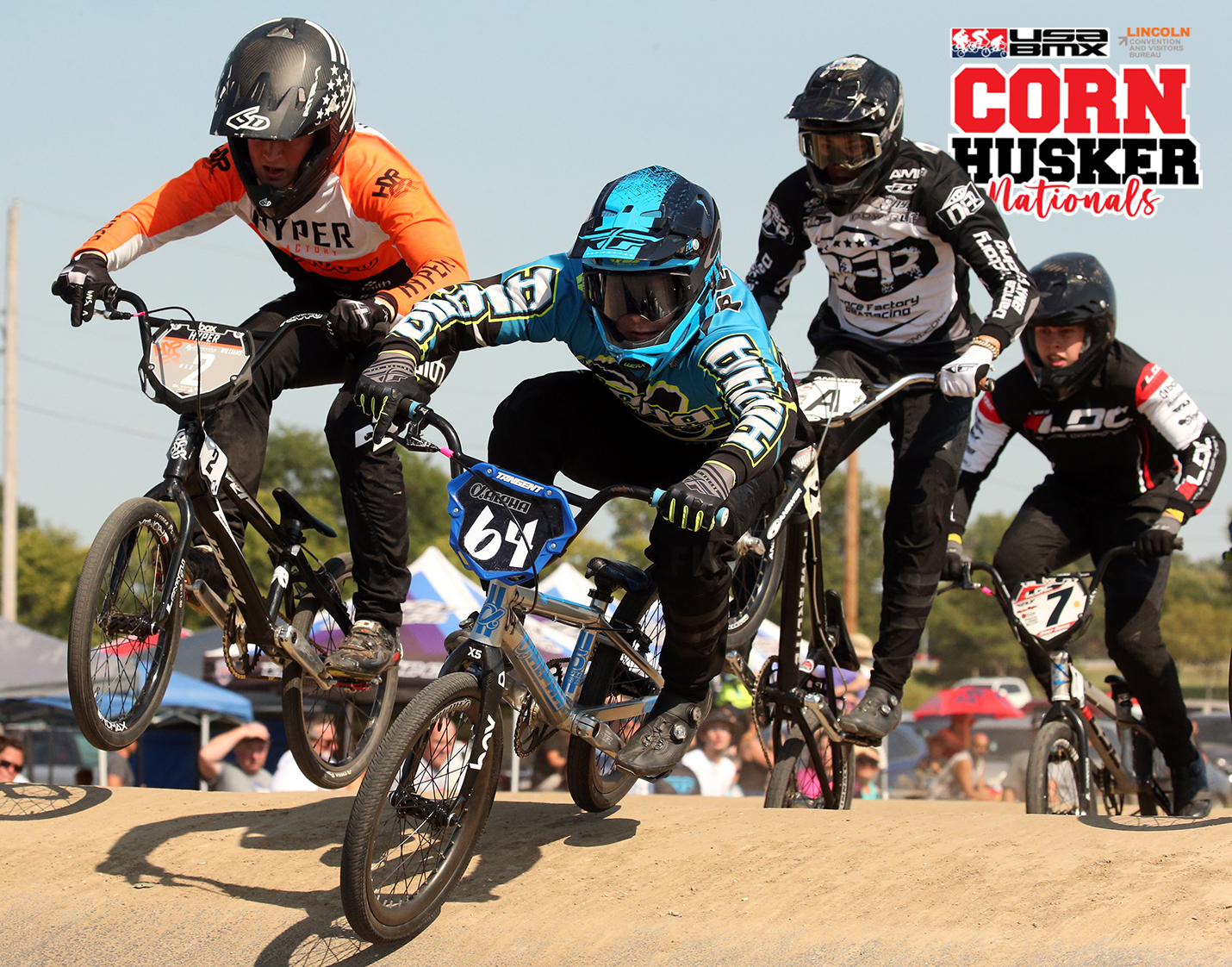 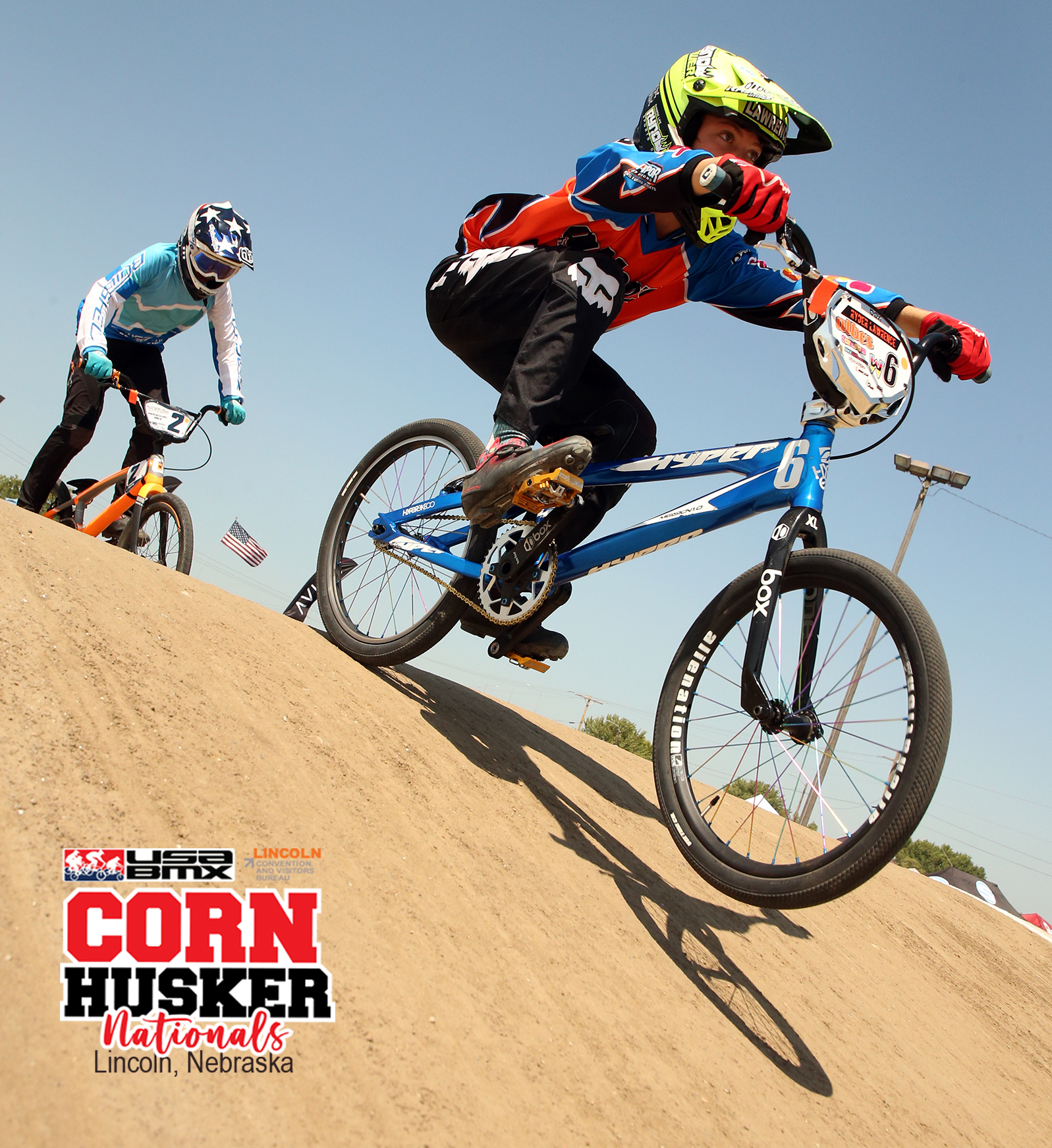 Above: Wearing an Albe's/Fox jersey all weekend, Ryder Lawrence was flyin' all weekend in 12x - winning two of the three days with style and skills.

Speaking of high-points, the small but potent LDC Factory brigade had another stellar weekend.
Their weekend update was posted on social media - and included the following: 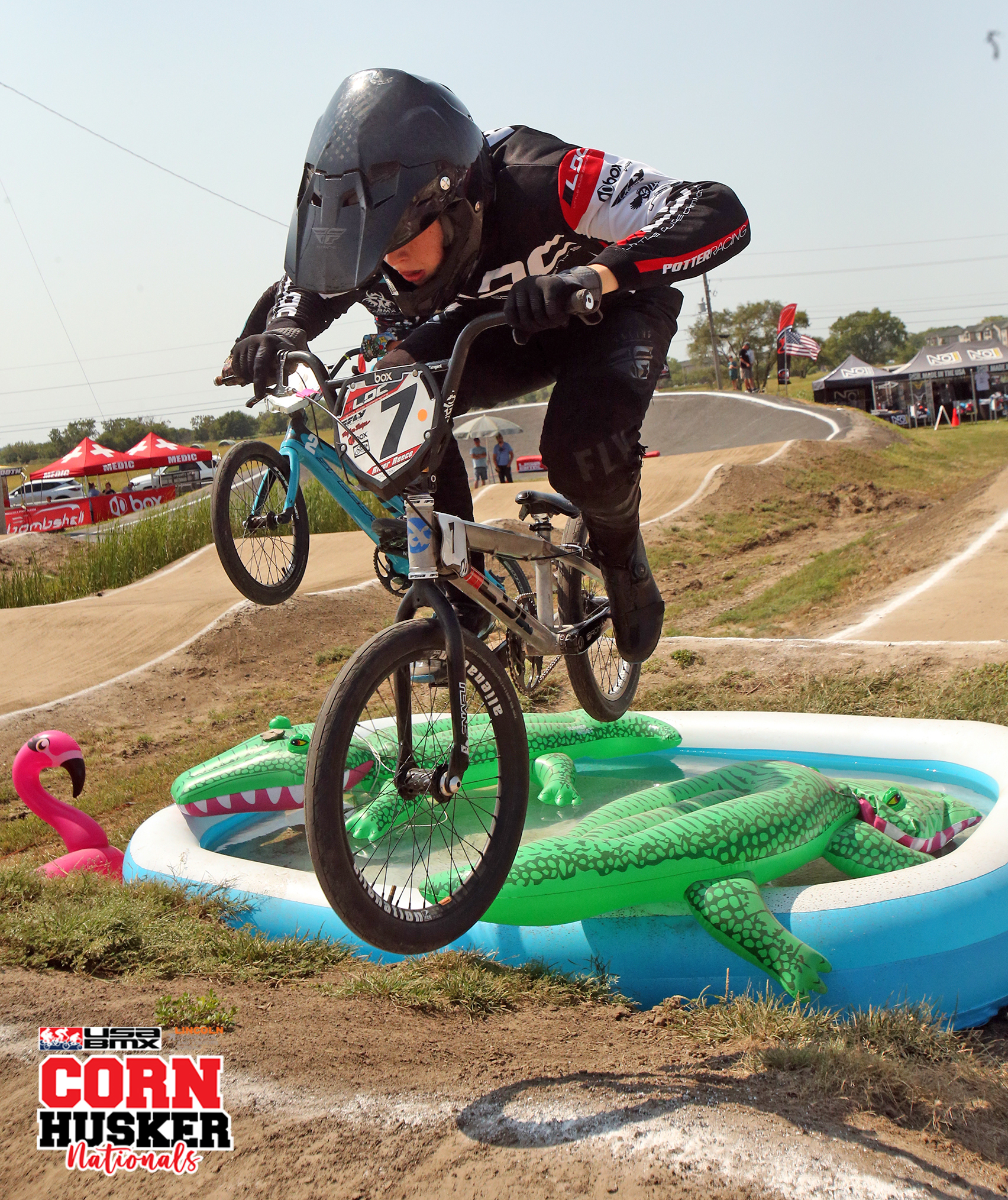 LDC really enjoyed themselves in Nebraska and had some great racing and results.
With 7 riders, 8 Wins, 17 podiums and 22 Top 4 finishes, our riders really made us proud.
10 year old Diamond Lil Ashley put on a show, going 5 for 5 in Wins and won it about every way possible! She did it from lane 8 with a strong kick down the last straight, to coming out of lane 7 and doing a perfect high-low in the corner, to going beastmode for the W out of lane 1. Hard to imagine she has only been in the sport a couple of years.
Another rider who was on fire this weekend and has only been at it for a few years (his second season with LDC) is 13 year old Chase Buller. He has really stepped it up this year. Chase got his 7th, 8th and 9th Win in Cruiser and three solid / no questions 2nd’s to the World Champ in the biggest class of the weekend.
15 year old River Reece just keeps growing and we are having trouble keeping a bike size that fits under him. With another bike change and very little time on it, River still scored three podiums and with his hard work will just keep getting faster.
The 7 year old World Champ Ashton Hester has been a real Road Dog lately hitting up all the post lock-down Nationals. Ashton came away with two podiums and four Top-4 scores. I am sure the wear of the road is starting to kick in, so a break soon to get back to training will be in order and to recharge his batteries.
Ashton's partner-in-crime, 7 year old Cannonball Sanchez, didn't get on the box this weekend but this track really wasn’t setup to his strength - since he mashes a huge gearing combo. 10 year old Reed Neubauer knows what it is like to be one of the smaller kids in his Class. Reed has to fight for everything and still was able to get in for a 3rd and 4th.
Our veteran on the team - 16 year old Ceasar Flores was having another solid weekend in the always tough 16 Class. Ceasar was looking good with two 4th’s but crashed hard on Sunday during motos and was out the rest of the day. I hear he is only bruised up and will be fine in a week or two.
--courtesy of TM Jerry Bradford

In 14cruiser,  Cedric Cade again borrowed Steve Adams' 24" and flew in for easy wins. Not bad for a kid who doesn't even own a cruiser!

Another pack of lethal Sharks - the Godaire Bros., out of Arizona, really made their presence known in Nebraska. Cutter - age 11, won 11cruiser on Saturday while older brother Ryker - age 12, scored the 2-spot on his 24"er. Keep a sharp eye out for the BMX Shark's Godaire bro-down. They are on the prowl! 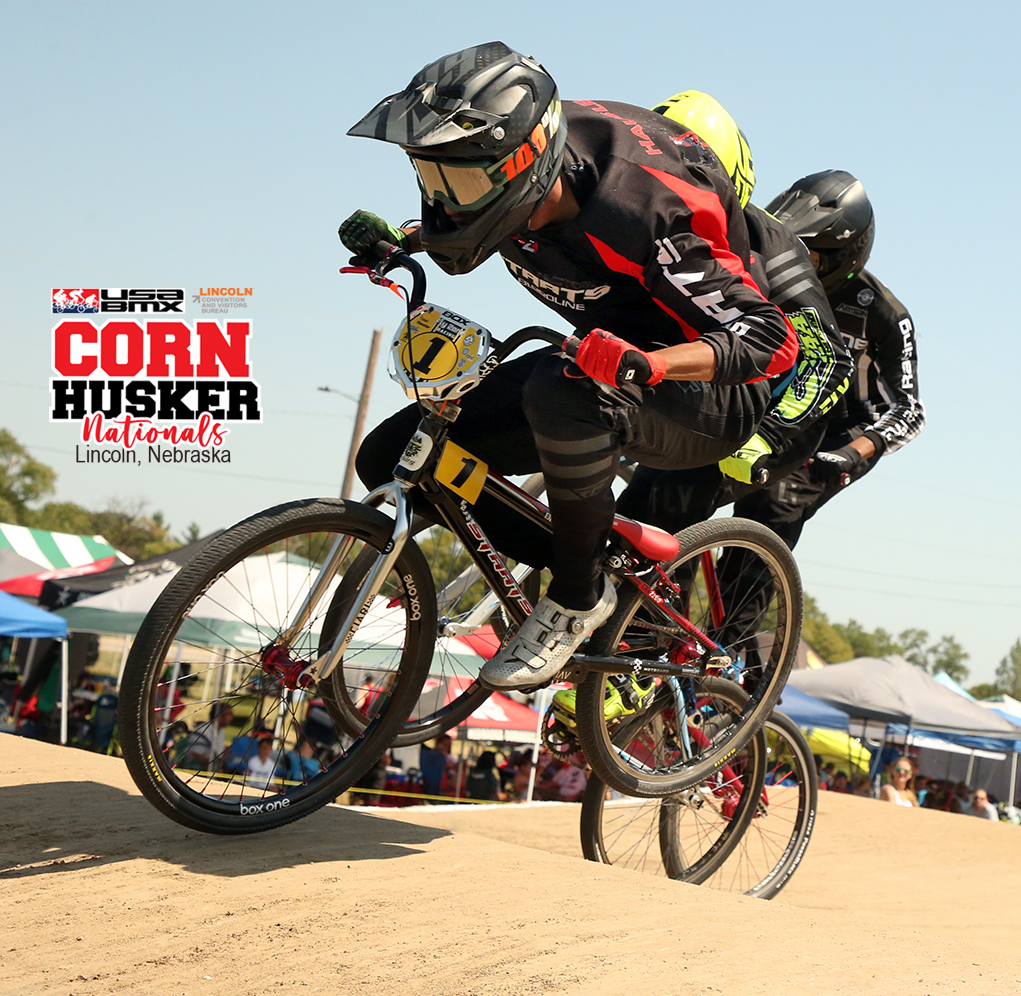 NEBRASKA TRIVIA: Kearney, NE is the Exact Midpoint Between San Francisco and Boston.

NEBRASKA TRIVIA: One of the World's Largest Mammoth Fossils Ever Found Was Unearthed in Lincoln County and Displayed at UNL's Morrill Hall.

Speaking of whooly mammoths, the older cruiser class was chock-full of prehistoric BMX relics - including a Nebraska living legend named Tim Lillthorup. Back in the 80's - around 38 or 39 years ago, Tim had left his homestate to chase the BMX dream in Arizona. He was hired as editor of the ABA's membership publication (at the time, titled "ABA Action.").

It's been almost a decade since we saw Tim cruiser-mounted and competing, and he was hangin' with two regulars on the National circuit - Woody Woodruff and "Old Skool" Scott Sloan. After the weekend, Tim posted on his FB page: "These two are animals and have certainly done the work to put them on top of podiums." The former ABA editor/photographer would hold off the rest of the comp to nab three thirds for the weekend. Meanwhile, in front of "Uncle Sam" was an ever fight between Woodruff and Sloan for the win. By Sunday, the finall tally was Old Skool = 2, Woody = 1.

NEBRASKA TRIVIA:
Memorial Stadium's current capacity to 85,458, but attendance numbers regularly exceed 90,000. Nebraska has sold out an NCAA-record 375 consecutive games at Memorial Stadium, a streak that dates back to 1962. 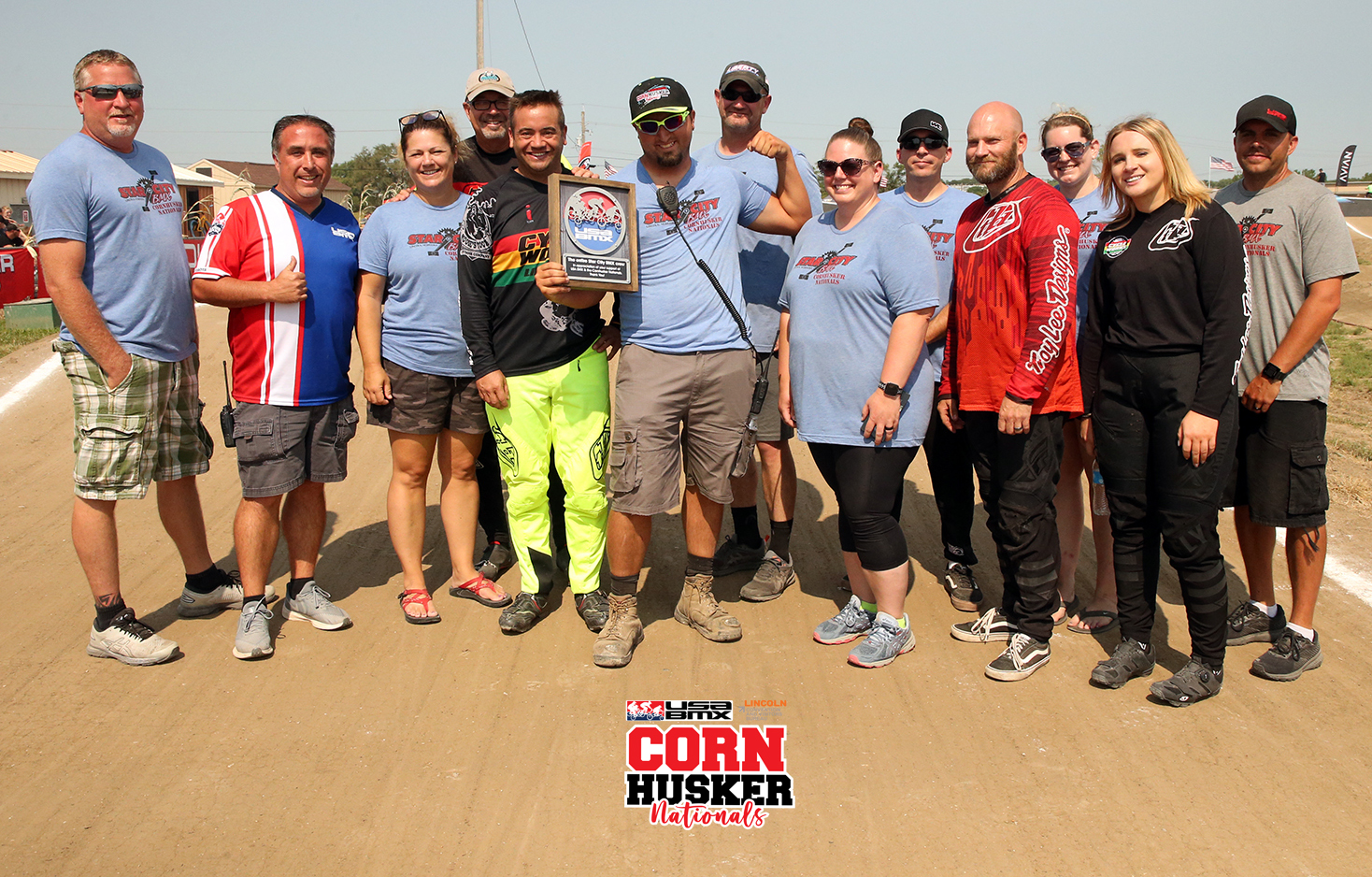 USA BMX would like to thank the hard-working staff at Star City BMX for a flawless, fun-filled weekend of National-caliber racing. TO Josh Larson and his crew pulled it off - and everybody had a GREAT time in Lincoln.

NEBRASKA TRIVIA:
The State of Nebraska has a long and illustrious history with BMX, and they have their own BMX Hall of Fame for the state. Currently, 44 riders have been inducted so far.