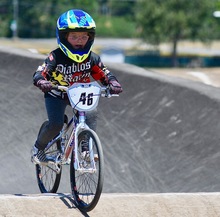 Aubrey "Aubs" Van Volkenburg is 3 years old. Over the summer of 2016, Aubrey came close with her cousin, Ty. We watched him race throughout the summer. Thats when Aubrey decided that she was going to "ride just like her Ty." Her nickname "Aubs" got given to her by her one and only Ty!! She goes by Aubs with her team Diablos racing!

August 2016, we bought Aubrey her balance bike. She rode that all over the house and got real comfortable on her bike. She was demanding thay she was going to "race her Ty". After a lot of thought, we decided to let her follow her dreams.

November 2016 we took her to her first race at Northwest Indoor in Burlington. She was scared and wouldnt get on the track. Friends of ours even tried....Nothing! We even tried calling her favorite cousin, but she still refused. The following week I took her down to Seatac BMX track with Ty and he got her riding. She's unstoppable now. The following weekend we went back up to Northwest Indoor where Aubs finished her first race bringing in 1st place. (Her Ty was there and helped her every step of the way!)

December 10th 2016 was her last race of the season. It was definitely a busy race for her. Double points race with Pro there. She brought her first 2nd place home. We took the rest of December off to rest up for 2017 season!!