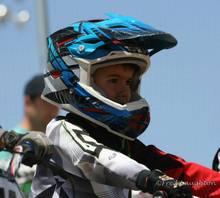 Nicholas has been riding a two wheel bike since he was only two years old. He started racing at four and has been hooked ever since. His home track is AV BMX in Lancaster and he absolutely loves every minute of track time he can get.